The dominance of the Powell High School boys’ soccer team was on full display last weekend.

The Panthers defeated Mountain View and Lyman on Friday and Saturday, winning 12-0 and 10-0, … 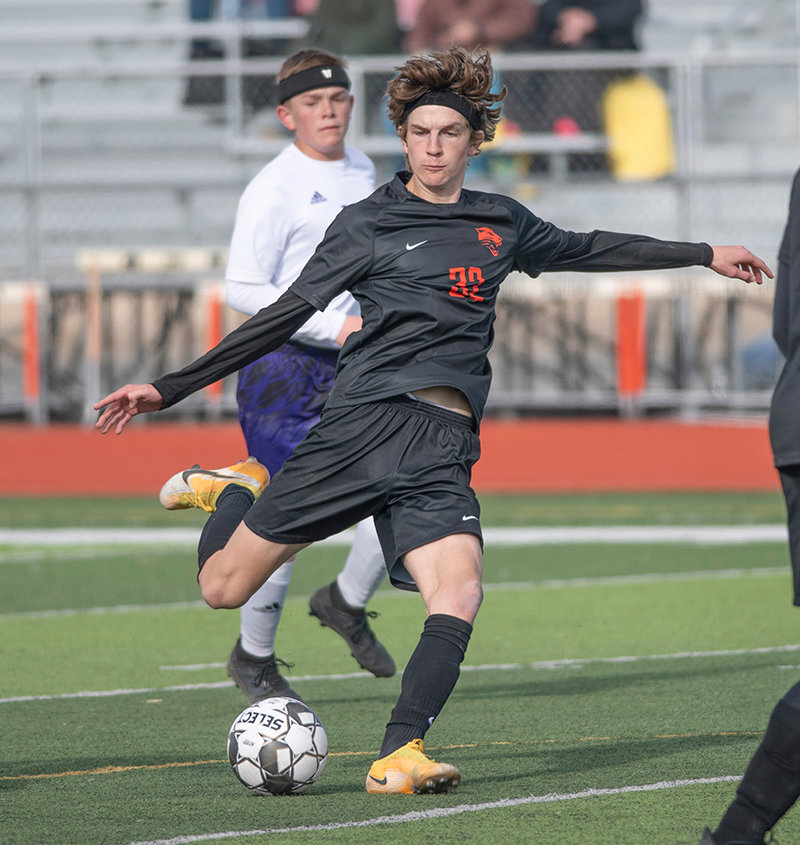 PHS junior Garrett Morris strikes a shot Friday in Powell’s 12-0 win over Mountain View. Morris is one of eight Panthers who scored in their lopsided wins last weekend.
Tribune photo by Carson Field 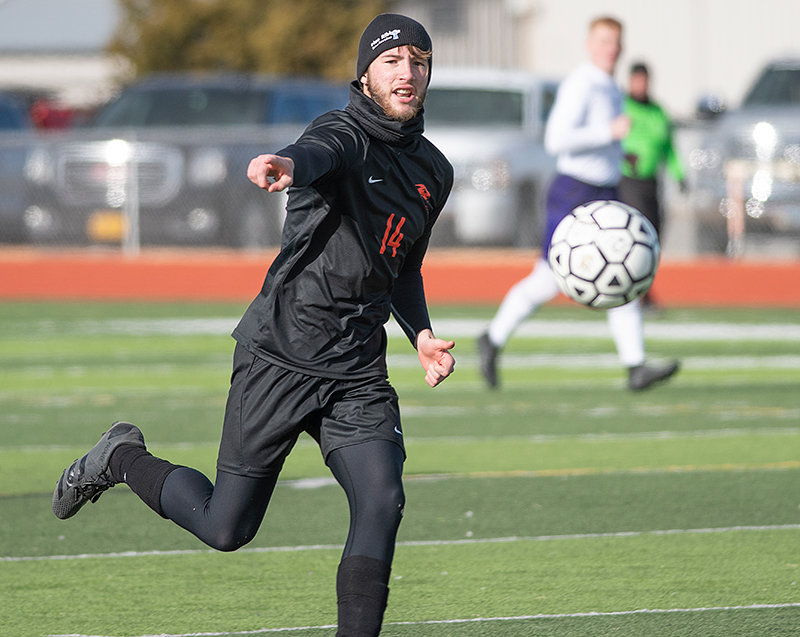 Adrian Geller tracks down a ball Friday against Mountain View. The Panthers outscored Mountain View and Lyman 22-0 over the weekend.
Tribune photo by Carson Field
Previous Next
Posted Tuesday, April 20, 2021 8:15 am
By Carson Field

The dominance of the Powell High School boys’ soccer team was on full display last weekend.

The Panthers defeated Mountain View and Lyman on Friday and Saturday, winning 12-0 and 10-0, respectively. They are now 7-1 and have outscored opponents 44-3 this season.

In addition to those players, two Panthers — Landon Sessions and Jack Pool — scored their first goals of the 2021 season.

Because of the uneven scorelines, PHS head coach David Gilliatt had the opportunity to play several subs and move starters to different positions in the games.

“It’s good for some of those players to get more experience in a varsity game, and I would say there’s a lot of value of getting repetitions for the starters,” he said. “I would say it was beneficial for both types of players.”

Though PHS sailed to two victories, Gilliatt felt like his team didn’t play its best soccer in the first half of either match. But the coach said the 10 to 20 minutes after halftime in both contests is where he saw the best soccer from his players.

“I don’t want them playing somebody else’s game,” Gilliatt said. “We need to play our brand of soccer throughout the game. Anybody can kick [a] ball, but can you do it with excellence?”

While the Panthers outscored Mountain View and Lyman by a combined 22 goals, Gilliatt said his intent was not to run up the score. The coach tinkered with his lineup and inserted a handful of subs in both matches.

Though his goal wasn’t to blow these opponents out, Gilliatt told his players to keep playing hard for all 80 minutes and play into their style, regardless of what numbers were on the scoreboard.

“It’s never meant to be disrespectful,” he said. “It’s meant to show respect that we take you seriously. It’s about playing competitively for the full game.”

Individually, Sweeney was Powell’s top offensive performer and now has 19 goals this season.

Erickson, a freshman, was a “big team player,” logging five assists on the weekend, while Trotter and Morris also played “two great games,” according to the coach.

Powell will look to continue its recent dominance at 5 p.m. Friday against Lander Valley. The first meeting between PHS and LVHS was a 1-0 win in favor of the Panthers.

When the team heads south to Lander, Gilliatt wants to see a similar vigor from his squad that he saw in the first match against the Tigers.

“I think in the first game we played with really good intensity,” Gilliatt said. “I think we need to make sure that we’re not just kicking the ball — there’s a sense of urgency but not a panic. Can we find the maturity and patience to move the ball up the field with the same intensity as when we first faced them?”