A slow start coupled with poor free throw shooting at the end of the contest saw the Panther girls basketball team drop below .500 for the first time this season. The team is now 2-3 after an … 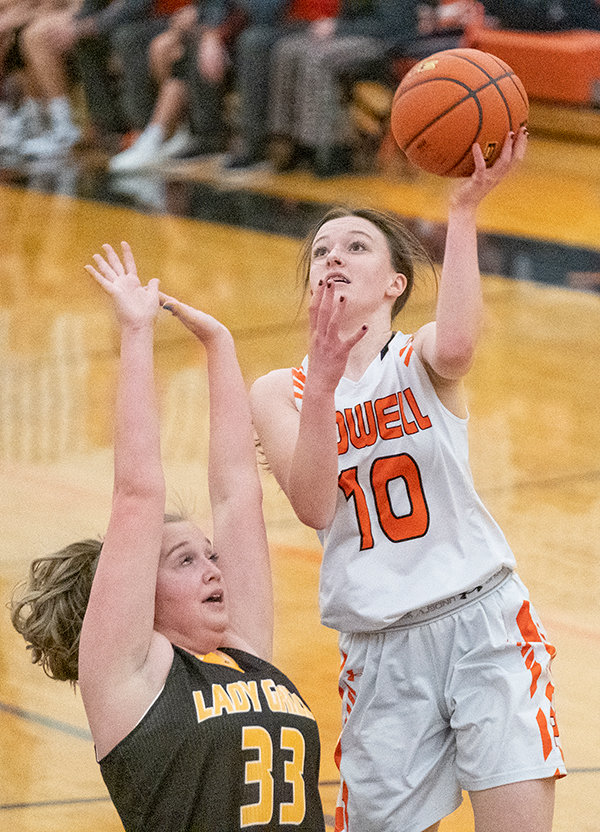 PHS sophomore Waycee Harvey finishes with the left hand over a Rocky Mountain defender. The Panthers battled to an overtime loss to the Grizzlies, 48-42, on Saturday.
Tribune photo by Seth Romsa 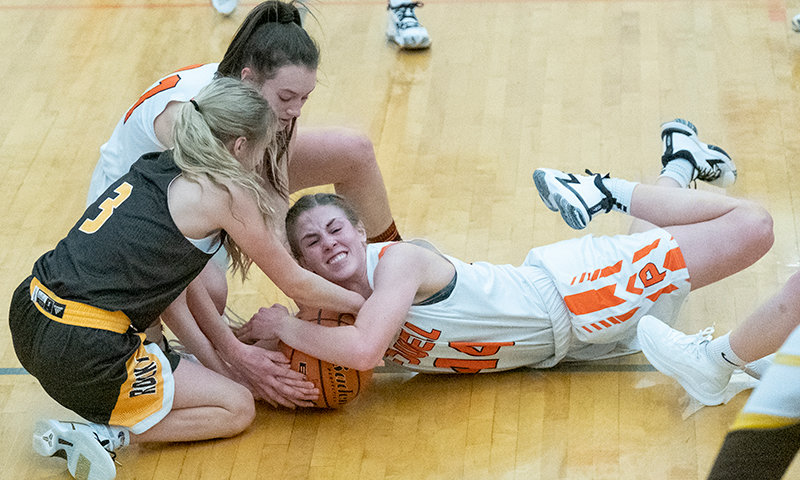 PHS junior Megan Jacobsen hugs the ball Saturday as she and freshman Saige Kidd attempt to wrestle the ball away from Rocky Mountain senior Marty Welling.
Tribune photo by Seth Romsa
Previous Next
Posted Tuesday, January 11, 2022 8:05 am
By Seth Romsa

A slow start coupled with poor free throw shooting at the end of the contest saw the Panther girls basketball team drop below .500 for the first time this season. The team is now 2-3 after an overtime loss to Rocky Mountain.

Powell welcomed Rocky Mountain (4-3) on Saturday with hopes of coming out of the winter break with a win over the No. 3 ranked team in 2A. However, it was the Grizzlies who came out firing early against the Panthers.

A high pressing defense mixed with Powell’s inability to finish led to a fast 11-2 start for Rocky after five minutes.

“I feel like we had a lot of self-inflicted turnovers throughout this game,” Panther head coach Chelsea Buher said. “We weren’t patient and we tried to play fast, but we talked about needing to play at a pace where we can transition, but also see success rather than turnovers.”

With the Panthers unable to find much success early on, they turned to their bench to help provide a spark.

Five quick points from freshman Catelynn Floy helped bring the energy up for the Panthers, which also helped generate a pair of open 3-pointers by junior Maddie Campbell.

“Catelynn [Floy] brings a lot of energy to our team,” Buher said. “She does a good job of reading passes and having a go getter attitude, which in turn creates offense for our team. Not to mention, her energy was contagious for everyone else on the floor.”

The 11-0 run by the Panthers was spread over the final three minutes of the first quarter and the first minute of the second quarter to give Powell a 13-11 lead.

Both teams struggled to find the hoop over the next five minutes, with the game tied at 17 with 1:30 remaining in the first half.

Powell used a strong end to the second quarter to take a 22-19 lead at the half, but failed to extend the lead off missed free throws in the closing seconds.

The third quarter remained a back and forth affair, as both teams battled for the lead, with Powell taking a 34-30 lead going into the final period.

Powell extended the lead to their largest of the game at 36-30 off a Megan Jacobsen layup.

Unfortunately for the Panthers, Jacobsen was not at 100% and was dealing with leg and foot cramps throughout the game.

“We tried to pull her out occasionally to allow her time to get more fluids and stretch,” Buher said.

Neither team was able to decisively pull ahead in the final minutes as they both committed turnovers, while the Panthers missed free throws.

The Grizzlies tied the game at 41 off a pair of free throws with 26 seconds remaining, which gave the Panthers an opportunity to win the game.

“We ran a play that allowed Maddie [Campbell] to come off of a pick and roll, while Waycee [Harvey] came off of a couple screens,” Buher said. “That would allow Maddie to have an option for herself, our roller, and Waycee coming off into the paint.”

The Panthers missed three different opportunities in the final 10 seconds, which sent the game to overtime.

In the bonus period, Powell was unable to generate any offense, as Rocky outscored the Panthers 7-1 to take the victory.

Unfortunately for the Panthers, they finished with 30 turnovers and were 7-18 from the free throw line.

The Panther girls will host the Big Horn Basin Tournament this weekend at Powell High School on Friday and Saturday.

Games on Saturday are determined by results from Friday’s games.