In a back-and-forth first game of Tuesday’s doubleheader against the Billings Halos, the Powell Pioneers needed an offensive spark to build a cushion. Kobe Ostermiller answered that call in the … 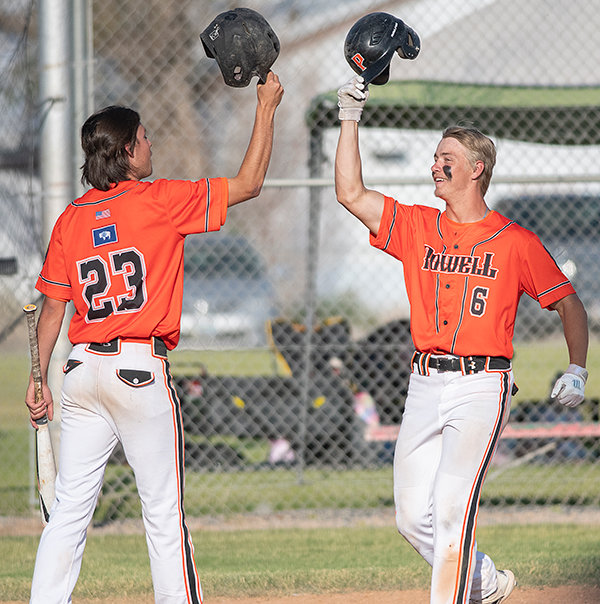 Kobe Ostermiller (right) celebrates with Landon Sessions after hitting his second home run in the first game of Tuesday’s doubleheader against Billings. Ostermiller sparked the offense, going 6-for-6 with five RBIs.
Tribune photo by Carson Field 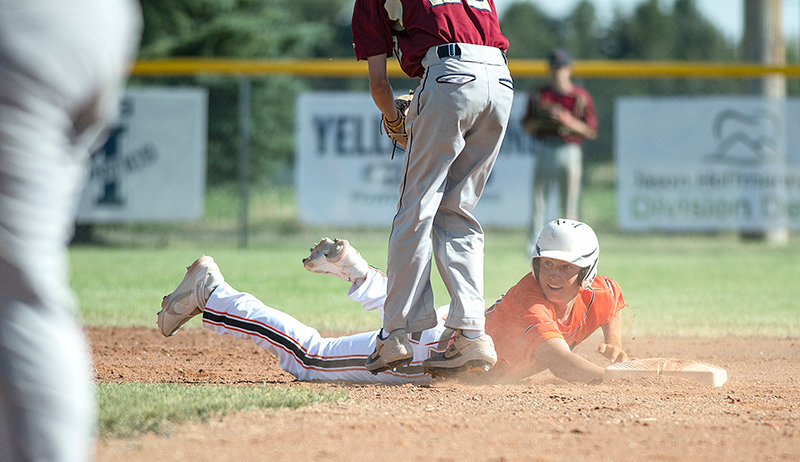 Cade Queen slides into second base in game two of Tuesday’s doubleheader. Despite an imperfect performance on the mound, in the field and on the base paths, the Pioneers earned two wins and advanced to 19-3.
Tribune photo by Carson Field
Previous Next
Posted Thursday, June 24, 2021 8:25 am
By Carson Field

In a back-and-forth first game of Tuesday’s doubleheader against the Billings Halos, the Powell Pioneers needed an offensive spark to build a cushion. Kobe Ostermiller answered that call in the fourth inning.

Leading by just two runs with runners on the corners, the Pioneers outfielder crushed a fastball to left field. Knowing the contact was solid, Ostermiller thought it would be his second career roundtripper, but that didn’t slow him down on the basepath.

“I figured it was going to be gone, but I was running it out, just in case,” Ostermiller said.

He was right: The ball sailed yards over the fence, extending Powell’s lead to five. But he wasn’t done there.

That fourth-inning slam was Ostermiller’s third base hit of the game, and two innings later, he practically put the game away. The recent PHS graduate belted another one over the left-field fence, this one a two-run shot.

Ostermiller’s second homer allowed the Pioneers to take a 8-4 win in game one before winning the second game by a slightly wider margin, 9-4.

Early on in game two, the Pioneers fell behind early, with Billings scoring three times in the first frame. In a deep hole early, Powell needed a spark plug, and once again, that was Ostermiller.

He took an easy swing on an offspeed pitch, sending a ball to left center for a leadoff double. Ostermiller crossed the plate later in the inning. And two innings later, the Pioneers collectively swung exceptionally, scoring five times.

Compared to his only home run before Tuesday — a grand slam on June 27, 2020 that was followed by a strikeout in his next at-bat — Ostermiller’s performance after the roundtripper was much better. This time, Ostermiller answered with a couple more hits and even got intentionally walked — a rarity in American Legion baseball.

“I made sure not to get too high and just stay level headed,” Ostermiller said.

Ostermiller finished the games 6-for-6 with five RBIs, and while he was certainly the key contributor, Powell’s offensive excellence stemmed beyond him. The team recorded 20 combined base knocks in the two games. Cade Queen and
Keaton Rowton each had two hits in the first game, while Dillon Payne and Brock Johnson each had two hits and two RBIs in the second.

Pioneers manager Joe Cates attributed his team’s prowess at the plate in the doubleheader to a spark from Ostermiller’s electric performance.

“It’s definitely a boost in the dugout,” Cates said. “They see him doing it and go, ‘OK, if Kobe’s doing it, then I can do it.’ That’s kind of the attitude at the plate this year. When Kobe’s on, we play well.”

Though the bats were at peak performance, other areas faltered for the Pioneers. Several Powell arms struggled with consistency, a couple players were thrown out on the bases and the team committed three errors in game one.

That said, Powell still won by a combined 10 runs and improved to 19-3, extending its winning streak to seven games.

“It says a lot about the team,” Cates said. “They don’t give up and they know they can win ballgames. It’s just great to watch them learn this year and build confidence.”

Powell played a game against the “World Team” on Wednesday and heads south to Green River this weekend for the Knight Invite Tournament. The Pioneers play four games there, hoping to see continued dominance in the batter’s box and more consistency in other areas.

“I’m looking for our kids to continue having positive at-bats,” Cates said. “This weekend in Green River is going to be a test for our pitching. ... It’s just going to come down to them being efficient.”