The NWC women’s soccer team was constantly on attack Saturday in a 4-0 win over the Gillette Edge at Trapper Field. And Peyton Roswadovski was at the tip of the spear, scoring all four goals on … 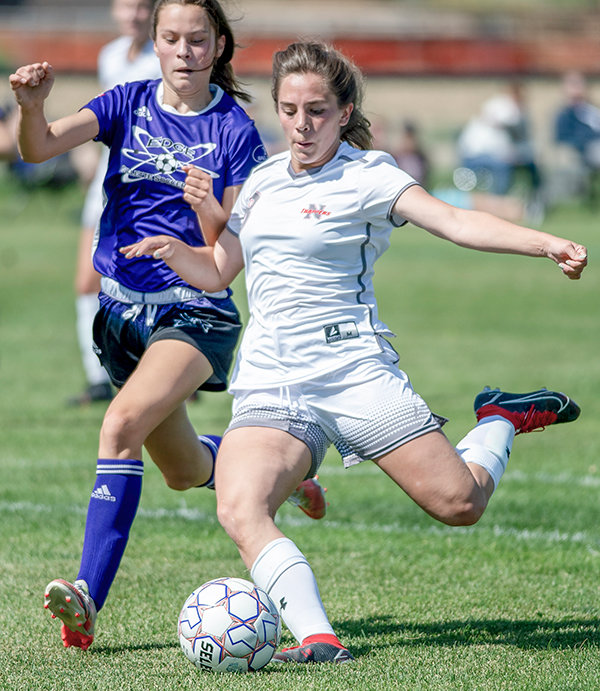 Northwest College’s Peyton Roswadovski scores a goal in the first half of a Saturday match against the Gillette Edge soccer club. Roswadovski scored four goals in the contest.
Tribune photo by Mark Davis 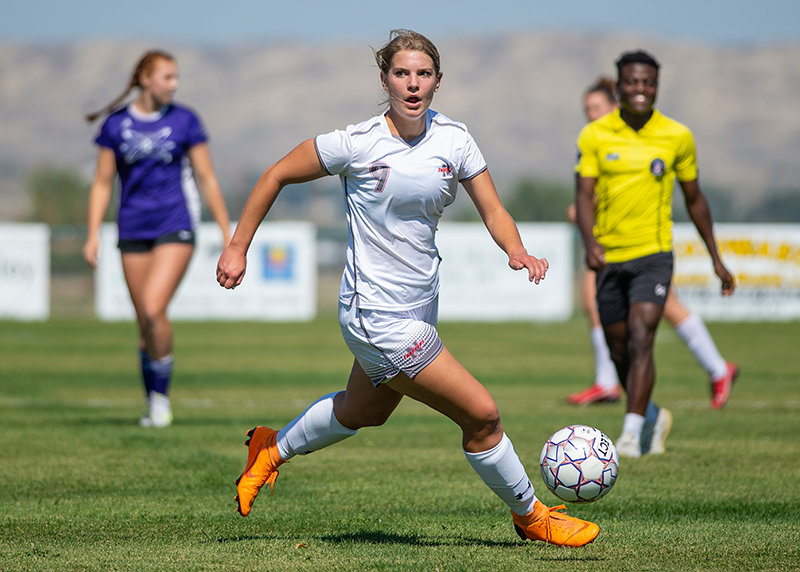 Northwest College midfielder Lauren Hiatt looks to pass in the first half against the Gillette Edge soccer club. The Trappers managed 18 shots on goal in the win.
Tribune photo by Mark Davis
Previous Next
Posted Thursday, September 16, 2021 8:15 am
By Mark Davis

The NWC women’s soccer team was constantly on attack Saturday in a 4-0 win over the Gillette Edge at Trapper Field. And Peyton Roswadovski was at the tip of the spear, scoring all four goals on five shots.

“She knows quite a few of those girls, so I think she wanted to perform well in front of them,” he said.

The Gillette Edge is a nonprofit soccer club dedicated to the growth and development of competitive soccer players and the game does count as a win on the Trapper schedule. The NWC women are now 3-2 on the season.

The Trapper defense dominated on Saturday, only allowing four shots on goal. Alexa Williams made three saves and Mattie Larsen of Powell made another.

While the Trappers had 18 shots on goal and 19 shots, Hill said the game could have easily gone the other way. “This was [the Edge’s] first game since early August.”

Hill said playing the Edge in town was an opportunity to look at new recruits and he was very impressed with several of the players from Gillette, including forward Ally Boysen.

“There’s some future players in that team that may end up playing for us if we’re lucky enough to recruit them,” he said.

Several teams in the region, including NWC, have seen games canceled or postponed due to COVID-19 infections. The Trappers will have several players out for this weekend’s games due to protocols, Hill said. They begin conference play Friday, hitting the road to face Trinidad State College in southern Colorado before traveling north on Saturday to play Otero Junior College.

The Trappers are a much improved team over last year’s 1-11 season, Hill said. He recruited heavily from Wyoming and Utah in the offseason and has brought in a lot of new talent for the 2021 team.

“It’s basically a very freshman-heavy team,” he said. “There were nine freshmen starting [against the Edge], which has been the story all season.”

Hill said it has taken time for the young squad to adjust to the physicality of the collegiate game and “they’re now starting to get it.”