Another match, another quick start for the Trappers. 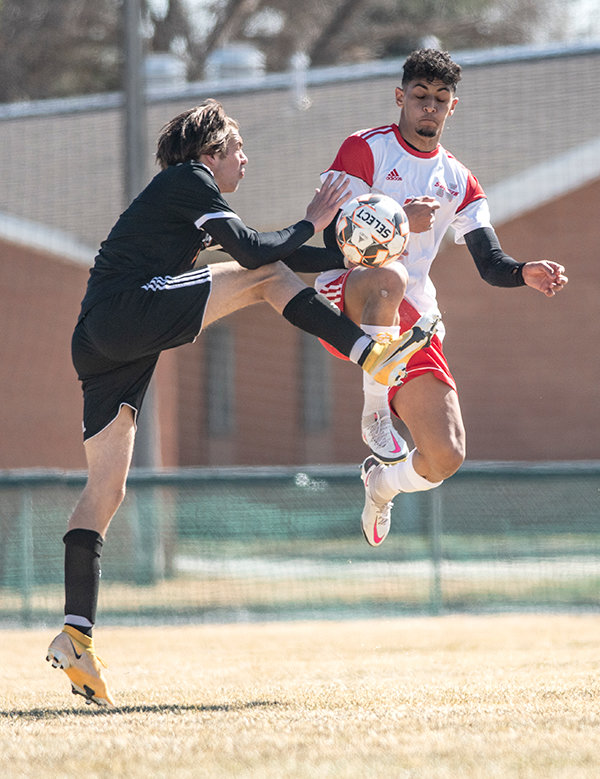 Northwest College’s Aimane Sharaoui (right) leaps for a ball in a match against Central Wyoming earlier this season. Despite a stagnant stretch in the middle of NWC’s most recent match against Western Nebraska, the Trappers prevailed with a 3-2 win.
Tribune photo by Carson Field 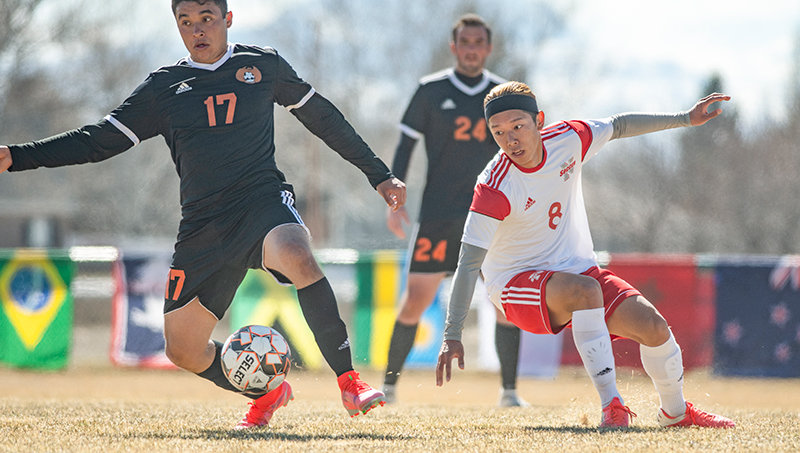 Taiga Tanabe slips when going for a ball earlier in the season against Central Wyoming College. After a win over WNCC last week, the Trappers are in the hunt to host a postseason game at Trapper Field.
Tribune photo by Carson Field
Previous Next
Posted Thursday, May 6, 2021 8:20 am
By Carson Field

Another match, another quick start for the Trappers.

NWC’s men’s soccer team picked up its fourth win of the 2021 season Friday, defeating Western Nebraska Community College 3-2 on the road. The Trappers now sit 4-2 overall and in fourth place of the NJCAA Region IX standings.

It didn’t take long for Northwest to get on the board. Just 54 seconds into the game, Haruki Yamazaki dribbled past multiple Cougar defenders and put one past WNCC’s keeper.

Yamazaki soon had another chance to score but was fouled in the box, allowing him to take a penalty kick. The sophomore cashed in, extending the early lead to 2-0, just a few minutes into the match.

Yamazaki currently leads NWC in scoring with five goals on the year — three ahead of the closest Trapper.

“He’s a big-time player,” head coach Rob Hill said. “I don’t know if I’ve seen anyone with those kinds of feet. He’s so quick and so deceptive, which makes him a nightmare for opponents.”

But after the early advantage, the Trappers faltered. At the end of the half, WNCC netted two goals to equalize the match at two apiece.

In a dry stretch in the middle of the match, Hill noticed less command from his squad.

“We started losing the ball,” he said. “We kind of relaxed and took our feet off the gas, and it hurt us.”

After nearly 70 minutes without a goal, NWC finally scored again. Tumekie Blackwood finished on a short pass from Thomas Mullen for the go-ahead goal, giving the Trappers a lead they didn’t surrender. NWC played exceptional defense after Blackwood’s goal to keep the Cougars at bay.

Dismal play in the middle part of the game has been a theme for NWC this year. The Trappers were able to pull through against WNCC, but that hasn’t been the case in every match, blowing leads to Otero and Trinidad State earlier in the year.

The first 20 minutes were excellent, and so were the final 25. But for Northwest to reach its full potential, the team has to learn to play sound soccer for 90 minutes, the coach said.

“I’m hoping that as we get closer to the end of season and playoffs they start to use experience to their advantage,” Hill said. “It really is not physical or tactical, but a purely mental breakdown. We get complacent, which can be a curse when you have talented players who can get the lead and think their talent will get us through.”

In addition to the scorers, NWC’s midfield stood out in the win. Orlin Castro Hernadez, Taiga Tanabe and Ryoto Nakamura complemented the play of the Trappers’ forwards and set up Yamazaki well for his strong game, per Hill.

The Trappers sit in a favorable position with just three regular-season matches remaining, only one of which is a conference match. They were supposed to face Laramie County on Saturday, but that was postponed because of COVID-19 issues on LCCC’s end.

A win in that match — which took place Wednesday — would likely make NWC the host of a play-in game in the Region IX Tournament.

“We need to go down and get a good result against LCCC,” Hill said. “Coming off two losses that we had, it’s nice to go on a win streak of three. It’s really put them in the driving seat of hosting a game.”