Coming into a weekend of important matches, NWC head volleyball coach Scott Keister wanted to come away with two wins to help solidify the team’s position in the Region IX standings. 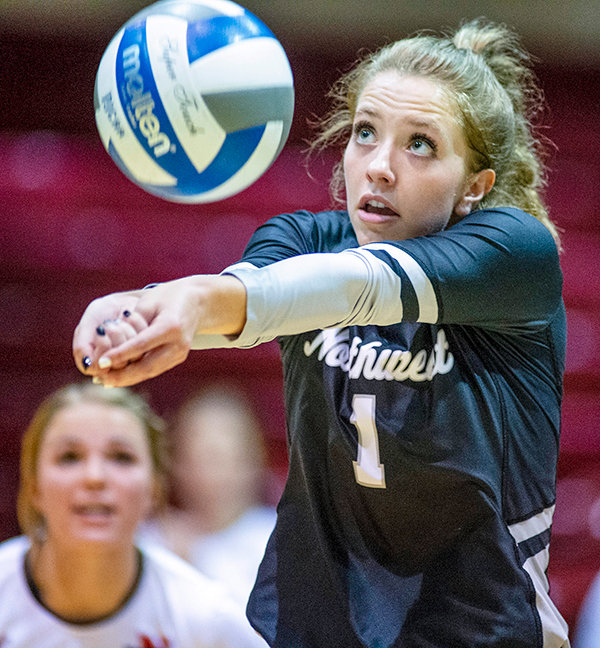 Trapper libero Paige Weimer looks to pass the ball forward as the Trappers faced Casper College on Friday. NWC came away with a 3-2 victory over the visiting Thunderbirds.
Tribune photo by Mark Davis
Posted Thursday, October 14, 2021 8:20 am
By Seth Romsa

Coming into a weekend of important matches, NWC head volleyball coach Scott Keister wanted to come away with two wins to help solidify the team’s position in the Region IX standings.

The Trappers did just that.

The weekend started Friday against Casper College, with the Thunderbirds taking the Trappers to five sets.

“Casper is a good team,” Keister said. “We knew it would be a fight but knew with how we have been playing that it was a winnable match and we just had to put together a whole match and not a set or two.”

NWC (18-4 overall, 3-2 Region IX North) came out in set one and played well, defeating Casper (12-14 overall, 2-3 Region IX North) 25-21 in the first set. The Trappers looked to continue their momentum in the second set, but alternating sets would become a theme for the team. They went on to drop set two 25-16, came back and won set three 25-20 then dropped set four 25-18 to set up a game decisive fifth set.

“We gained some momentum at the end of four and we were able to start strong in set five,” Keister said.

The Trappers came out and hit 10 of their 23 attempted hits for kills with only one error, giving the team a .391 hitting percentage and a final set victory of 15-8.

Keister said that, thanks to one of their largest crowds of the season, the team was able to use the energy from the fans and the momentum to help win the match.

Sidney Parker led the team with 16 kills, followed by Baylee Peterson with 13. Peterson led the team in kill percentage with a .387 through five sets.

As they took on Western Wyoming Community College (3-17 overall, 1-4 Region IX North) on Saturday, the Trappers came back with a continued focus from the Casper win the prior night.

WWCC was coming off a recent victory over Laramie County Community College (LCCC), but NWC came out and stayed hot. The Trappers dominated the first set, winning by a final score of 25-7, with a .429 hitting percentage as a team.

The hot hitting continued into the second set as the Trappers collected 14 kills and a .344 hitting percentage, winning the set 25-12.

Leading 2-0, Keister was looking for his team to show its growth and finish the sweep, and the Trappers did.

“They put the hammer down and kept it down. It was nice to see,” Keister said. “Earlier in the year we would play teams and win 3-0 and we would let up in the third set but I did not see that against these guys.”

The Trappers came out in the third set and finished with 15 kills, winning it 25-18 to complete the sweep over the Mustangs and a pair of wins. That helped boost the Trappers into second place in Region IX North.

Leading the team for kills was Peterson with 12, followed by Karli Steiner with 11. Sabree Adams led the team in kill percentage with a .444 for the match.

“Baylee [Peterson] had a great weekend,” Keister said. “We had a tough week at practice; they got put through the wringer. It was not easy and it was not fun, but they are resilient and they kept grinding away at it.”

At 3-2 in Region IX North, the Trappers trail only Central Wyoming, which sits on top of the division with a 5-0 record.

However, just behind NWC are Eastern Wyoming College (EWC), LCCC and Casper College, which all have 2-3 records, followed by WWCC at the bottom of the division.

On Friday, LCCC will make the trip up to Powell for a 7 p.m. match, as the Trappers look to avenge a loss earlier in the season to LCCC on the road.

Friday night will also celebrate the 75th anniversary of Northwest College as an institution, and each person in attendance will receive a free red T-shirt.