Region IX play made its way to Northwest on Friday and Saturday, with the Trapper women’s soccer team dropping contests to Trinidad 3-1 and Otero 1-0. 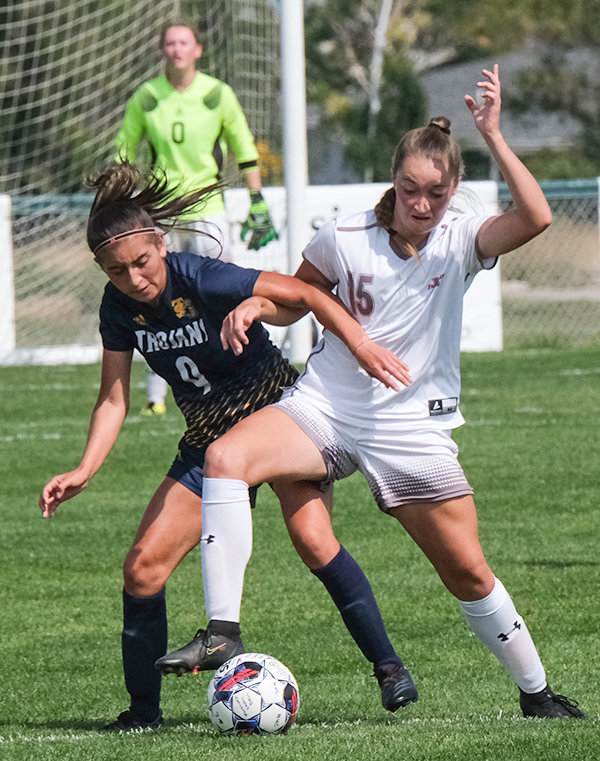 Katelynn Campbell battles in the midfield with a Trinidad player on Friday. The Trappers head out on the road for Region IX play this weekend.
Tribune photo by Seth Romsa
Posted Thursday, September 22, 2022 8:00 am
By Seth Romsa

Region IX play made its way to Northwest on Friday and Saturday, with the Trapper women’s soccer team dropping contests to Trinidad 3-1 and Otero 1-0.

Moving the ball and creating opportunities eventually led to a big opportunity 33 minutes into the game.

A cross from Aubrey Cooper whipped into the box, and led to a chance from Lauren Hiatt.

Hiatt’s shot was saved, but a scramble in the box led to an opportunity that Peyton Roswadovski put in the back of the net to make it 1-0.

Northwest appeared to get a second goal 67 minutes into the game, but an offside call prevented the Trappers from extending the lead.

Trinidad started to create pressure, and found a goal on a cross turned shot that tied the contest 1-1.

Continuing to create pressure on the Trapper defense, the Trojans pushed closer to the lead.

A misplayed ball by a Trapper defender found its way into the back of the net, giving the visitors a 2-1 lead with 4:37 left.

Unable to stop the Trinidad attack, they scored again after a Trojan forward dribbled through the Trapper defense and scored just 40 seconds later to secure the victory.

Heading into Saturday the Trappers matched up with Otero (1-1 overall, 1-0 Region IX).

Northwest was able to absorb early pressure from the Lady Rattlers who continuously played up the wings trying to find crossing opportunities.

The Trappers continued to absorb pressure, but were unable to find many opportunities on the counter attack.

Northwest went into the half tied, but minutes after the break Otero found its breakthrough on a ricocheted ball through the defense that was finished in the back of the net.

That goal proved to be a winner, giving Otero the victory in Powell.

The Trappers hit the road this weekend, heading to take on Laramie County Community College (3-5 overall, 3-1 Region IX) in Cheyenne at 3:30 p.m.

Northwest then hopes to get revenge on Saturday against Western Nebraska (5-3 overall, 2-2 Region IX) at 11 a.m. after the Cougars defeated the Trappers 5-1 earlier this month.