Northwest College held its first home sporting events of the 2021-22 school year, with the men’s and women’s soccer teams playing three matches in the last week. The Trappers played host … 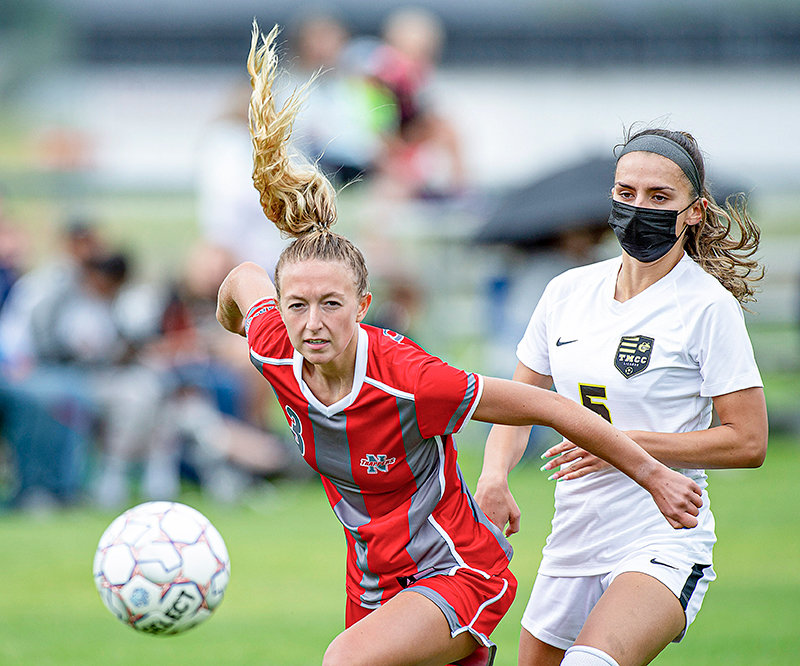 Kameron Stitt lunges toward a loose ball in Friday’s Northwest College soccer game against Truckee Meadows Community College. With a win over TMCC Saturday, the Trappers matched their win total from the spring campaign.
Tribune photo by Mark Davis 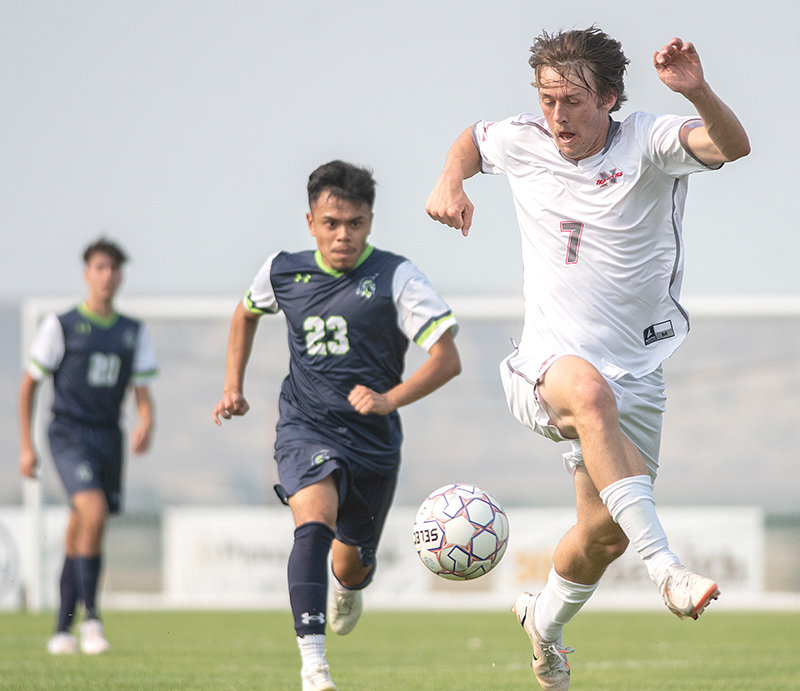 Sam Bauer controls the ball in NWC’s 3-1 scrimmage win over Providence. Bauer’s late goal was the first of his college career.
Tribune photo by Carson Field 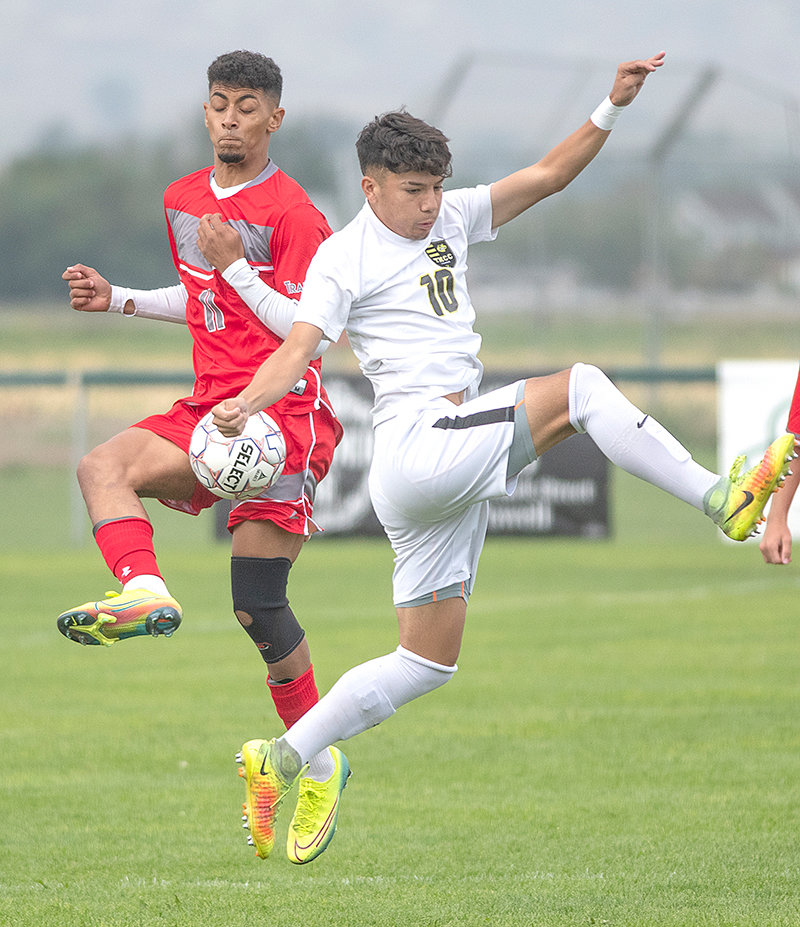 Aimane Sahroui (right) leaps for a ball Friday next to Truckee Meadows’ Allen Somera. Northwest picked up a scrimmage win over University of Providence Tuesday after losses to TMCC.
Tribune photo by Carson Field 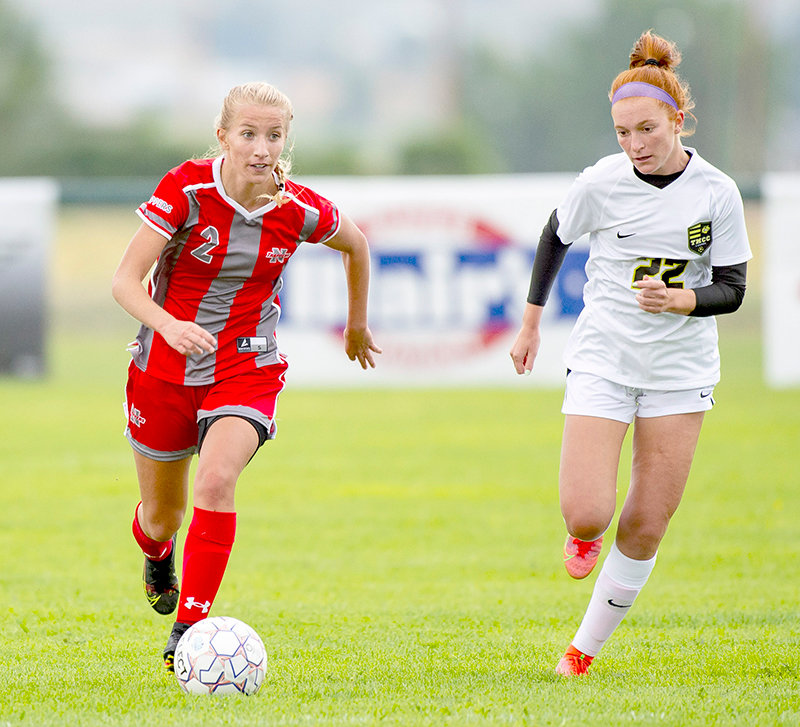 Northwest College held its first home sporting events of the 2021-22 school year, with the men’s and women’s soccer teams playing three matches in the last week. The Trappers played host to Truckee Meadows Community College on Friday and Saturday and scrimmaged against the University of Providence Tuesday.

The women’s team won two games in its opening week, while the men won once.

The Trapper women started the weekend with a 2-1 loss to Truckee Meadows Friday. Freshman Lauren Hiatt netted a goal late in the second half to knot the match at 1-1 for NWC’s first goal of the season. But just moments later, the Mighty Lizards took advantage of a misplay from the Trappers’ goalkeeper and scored the game-winning goal in the 82nd minute.

A day later, however, Northwest got its revenge on the visitors from Reno, Nevada.

It was once again a competitive contest, with the Trappers and Mighty Lizards trading goal for goal. Strikes from Cheyenna Alvarado and Peyton Roswadovski sent the 2-2 match into extra time, where the Trappers ultimately prevailed.

Freshman Zoey Bonner netted a game-winning free kick from the 18-yard box to secure NWC’s first win of the season, 3-2, just seven minutes after regulation. Just two matches into the 2021 fall, Northwest matched its win total from the entire spring.

The Trappers continued their winning ways Tuesday against a four-year school. University of Providence’s NAIA status held no weight in Northwest’s home scrimmage, as the Trappers cruised to a 3-1 win over the Argos of Great Falls, Montana. Alvarado led the way offensively, scoring twice.

NWC’s men’s team started the season Friday in a close match against the Mighty Lizards that they ultimately lost. Truckee Meadows cashed in on two of its six shots on goal, winning 2-1. The Trappers’ only score came from Senri Nakamura.

NWC’s second outing against the Mighty Lizards wasn’t as close, as they fell 6-0. Two Trappers received yellow cards, and the NWC keepers gave up six goals on nine shots on goal. The Mighty Lizards posted 13 total shots, while Northwest didn’t log one.

But NWC rebounded well from Saturday’s dreadful performance: The Trappers won 3-1 over Providence for an exhibition win. Freshman Sonny Bizure notched two goals, while Powell native Sam Bauer scored to put the nail in the coffin.

NWC played another set of exhibitions Wednesday afternoon, facing Rocky Mountain’s men’s and women’s teams in Billings. The Trappers’ next action is on Sept. 3, when NWC faces Western Nebraska Community College on the road. That is also the Trappers’ first Region IX matchup of the year.