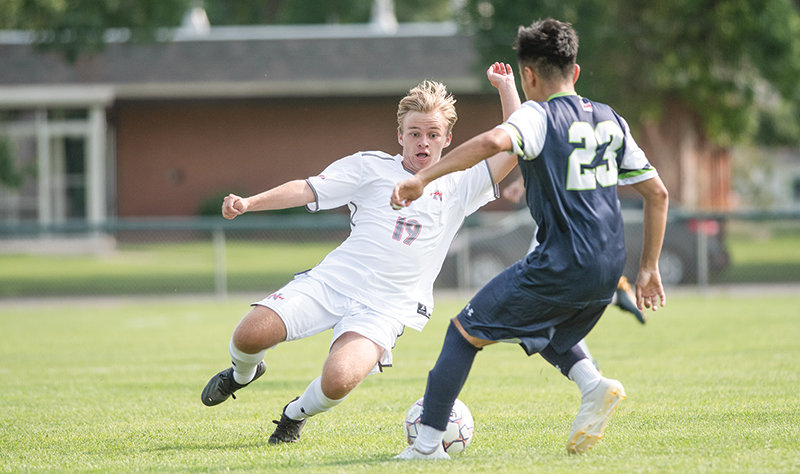 NWC freshman forward Landon Carpenter goes in for a slide tackle during a scrimmage against the University of Providence in August. The Trappers will return for their first home matches in over a month on Friday and Saturday.
Tribune file photo by Carson Field
Posted Thursday, September 30, 2021 8:15 am
By Seth Romsa

The Trappers (1-5-1 overall, 1-2-1 in Region IX) earned the Sept. 22 victory thanks to consistent pressue in both halves, as they registered eight shots total in each period.

Eleven of those 16 shots earned the Trappers multiple opportunities to earn their first win of the season over Central Wyoming (2-7, 0-3).

Coach Rob Hill felt the Trappers were able to apply pressure, but sometimes played too many short passes; along with fatigue from a long road trip the previous weekend, it made the game harder than it should have been, he said.

“We did not play particularly well, and did not take advantage of the space that was given to us,” Hill said.

The Trappers were able to open up play in the second half and opened up more opportunities for themselves, despite making the game more difficult than it should have been.

Along with the first win of the season, Trapper keeper Matias Sandoval earned the team its first clean sheet of the season, saving eight of CWC’s nine shots on target.

Sandoval has consistently been one of the top keepers in the NJCAA, as he currently sits fourth in the nation in saves with 66 on the season, and No. 14 in save percentage with a .846 save percentage on the year.

Despite having only one clean sheet and win on the season, Sandoval ranks No. 50 in the nation with a goals against average of only 1.82.

The Trappers will finally return home this weekend for their first home game since Sept. 4.

They will host Laramie County Community College (LCCC) on Friday at 3 p.m. and Casper College at 1 p.m. Saturday.

LCCC will come to Powell as the No. 7 ranked team in the nation with a record of 7-1 overall and 4-0-1 in Region IX play.

“We are going into some extremely tough games this weekend, this will be a big weekend in deciding our fate,” Hill said.

The coach hopes that the recent break from action, along with a continued emphasis on taking advantage of the spaces given to the squad, will help the Trappers take advantage of the opportunities.