The search for a new Northwest College women’s basketball coach is now over, and a new era will soon begin.

Lauren Davis, a former Division II assistant and player, is taking the reins as … 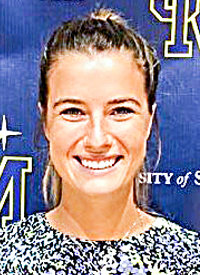 The search for a new Northwest College women’s basketball coach is now over, and a new era will soon begin.

Lauren Davis, a former Division II assistant and player, is taking the reins as the Trappers’ newest head coach. She replaces Camden Levett, who held the position for three years before accepting a job at Moberly Area Community College in Missouri in July.

Most recently, Davis served as an assistant at Angelo State University in San Angelo, Texas, during the 2020-21 season. Before that, Davis worked as a graduate assistant at University of Saint Mary. Her playing career included time at Wayne State College, Gillette College and Trinidad State Junior College.

Being a head coach has been Davis’ dream job for years, and she sees NWC as a great place to become one.

“When this opportunity came into fruition, I knew it would be a great fit,” Davis said. “It’s a perfect place for me to have my first head coaching job, and it’s a good place to put myself in a position to be successful.”

“She has a lot of energy and experience that will be great for our department and student-athletes,” Erickson said.

Northwest’s records improved every season in Levett’s tenure, and Davis said she hopes to replicate the program’s recent growth. As someone who played college basketball as recently as 2017, much of her coaching philosophy is about building relationships — with her players, colleagues at the college and others in the community.

Davis reached out to every player on this year’s roster, both returners and incoming freshmen, as soon as she accepted the position.

“I know what it takes to be successful as a college athlete,” she said. “It’s amazing that I’ll be at a junior college and show these girls what it takes to make it to the next level. I understand everything that they go through on and off the court.

“I plan to help them move into the dorms, meet some of their families and do everything I can to build those relationships from the beginning,” she said.

Basketball has taken Davis across the country, with stops in Texas, Nebraska, Colorado and Wyoming. As a former NJCAA Region IX player, she is excited for what this new chapter at Northwest holds.

“I’m ready to take the bull by the horns, get to know the community and see all of the support,” she said.