The walls of the Wyoming Game and Fish Department’s new headquarters are finally going up, revealing a courtly structure in a new location north of Cody. At the site along Wyo. Highway 120, …

The new Cody Region headquarters for the Wyoming Game and Fish Department is taking shape north of Cody on Wyo. 120. Crews hope to get it under roof and enclosed and then spend the winter working on the interior. The facility is scheduled to open in late June or July.
Tribune photo by Mark Davis 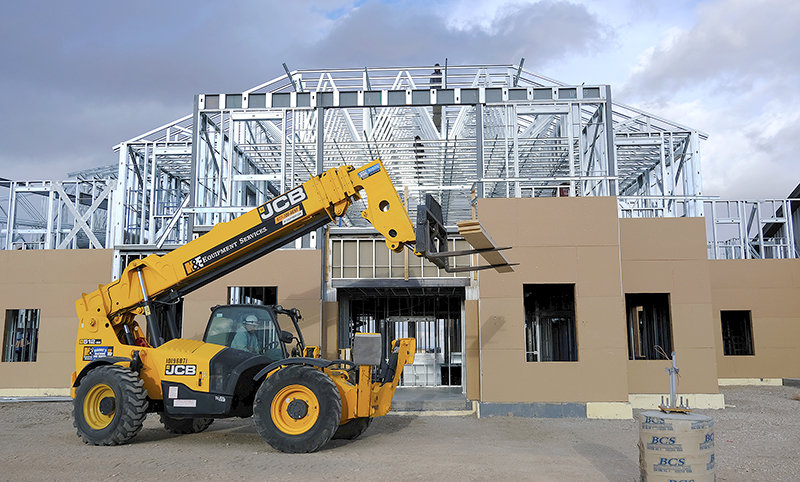 Crews work through Friday afternoon on the new Wyoming Game and Fish Department Cody Region headquarters. It is being built just south of Newton Lakes and the Cody Shooting Complex.
Tribune photo by Mark Davis 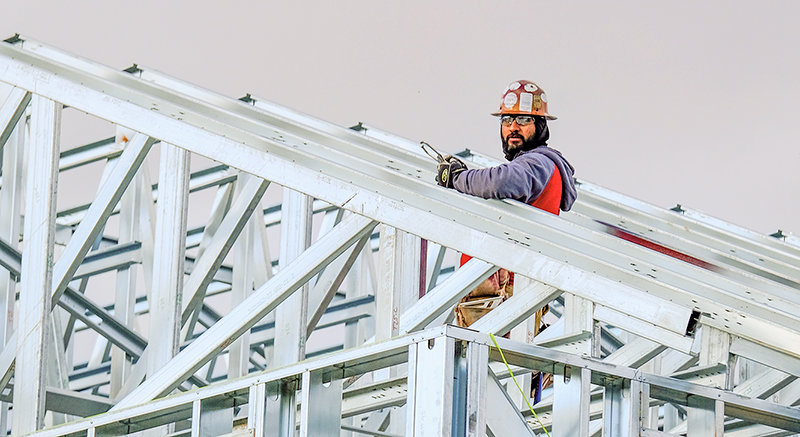 A BHI construction crew member works on the metal frame of the new Wyoming Game and Fish Department’s headquarters in the Cody Region. The project is budgeted for about $10 million.
Tribune photo by Mark Davis
Previous Next
Posted Tuesday, November 23, 2021 8:20 am
By Mark Davis

The walls of the Wyoming Game and Fish Department’s new headquarters are finally going up, revealing a courtly structure in a new location north of Cody. At the site along Wyo. Highway 120, crews are pushing to get the project under roof so they can move inside to work the interior during the winter months.

The facility is being built with every convenience in mind to house officials and assets, offer space to the general public and even provide a secure location to house grizzly bears when needed. It’s the culmination of a 10-year plan, paid for entirely from the department’s budget and going up just under budget despite recent material price increases and shortages.

Convenience is the key word at this address, starting before you even walk in the door, Cody Regional Wildlife Supervisor Dan Smith said during a Friday afternoon tour.

“If you think about our parking lot now, when people come in they’re kind of stuck in front,” Smith said, referring to the current office south of Cody. “If you have a horse trailer, a boat or a camper pulling in our lot and have never been there, it’s like, ‘Where do we go from here?’”

The new parking lots at the headquarters will have generous room for parking with trailers and a turn-around, for ease of maneuvering. It will save time for customers who otherwise might have needed to drop off a trailer before checking in harvests and move the nearby Aquatic Invasive Species (AIS) checkpoint conveniently on campus.

Currently, Cody AIS inspectors face hours of waiting to check boats with the inability to do much else. Now, they’ll have a seat inside the office and the ability to tackle other tasks in the down hours. There is also a separate lot for employees, as well as ample indoor parking for expensive assets — like boats and other pricey tools that otherwise would weather in the sun.

When you walk in the front door, the changes will be immediately apparent, with a large greeting area under a vaulted ceiling and dueling office portals ready to assist customers. Down the hall will be employee offices. But the office space is still limited to the size of a modest home bedroom at 10 feet by 12 feet.

“They’re not the luxury suites some people are saying that we’re building out here,” Smith said.

To the right of the main entrance is a huge community room with picture windows, revealing the mountains to the west. Smith said the department is trying to make it a great work environment for employees and at the same time a facility that serves the public.

Public meetings, hunter’s safety classes and other events will move to the headquarters from the Cody library and business basements. That means less packing and unpacking of the gear needed for off-site meetings as well as making the headquarters accessible for folks with disabilities. An elevator will also make the top floor available to those unable to take the stairs or transporting awkward loads of equipment.

To the left of the main entrance will be a new animal check station with the ability to back up right to the door for services like harvest inspections or tests for chronic wasting disease or brucellosis. It includes its own entry for convenience.

“It’ll be a designated place for hunters to go and it’ll be a lot better for the public,” Smith said.

Beyond the animal check station is the immense two-story shop, complete with built-in coolers and freezers, with a rail system for moving carcasses and plenty of room for any size vehicle. Tucked in the rear of the shop is a secure large carnivore bay to temporarily house species like grizzly bears live-trapped in the area if needed.

“It’s an enclosed shop where we can work up bears. And, if we have to keep a bear overnight, it’s in a secure place,” he said, adding, “that’s safety for us, that’s safety for the public. That’s just a win-win for everyone.”

Above the shop will be a large storage area for equipment. Each division within the department will have a secure, dry place “instead of having the 15 sheds on the back lot in the cold and all the issues that come with that,” Smith said.

Information and education specialist Tara Hodges is excited to soon have a place to store “my fishing poles, hides and all my hunter education supplies.”

Employees from the different divisions each had a chance to discuss their needs prior to the design by Cody’s Plan One/Architects.

Out back there is a separate building for storing of larger equipment, like generators, boats and all-terrain vehicles. One of the few things the facility is missing is a corral — at least so far. Smith said the complex was designed to meet the needs of the department for the coming decades.

“We wanted to build enough office space for the next 50 years,” he said. “When we first move in, there’s probably going to be a couple empty offices.”

Those offices will give the department the flexibility to accommodate future hires, he said. The department’s current facility is located just south of Cody on Wyo. Highway 120, and was built when the Game and Fish had far fewer employees.

At this point, the department hopes to move to the new headquarters next summer. It’s great to have new facilities, but there’s tons of stuff to be moved from the old offices, Smith said. “It’s daunting.”

Despite the possibility of relocating through the hot months, Smith said “when you think about the weather and the busyness of the season, it’s probably the best season other than for the fisheries crew,” which will be busy with field work.

Materials were delayed and some costs went up, but at about $9.6 million, the structure is still under the estimated $10 million budget. BHI Construction is the contractor building the structures.

The department planned and saved for a decade for the project, but nobody could have predicted a global pandemic and supply chain disruption when they started the process. The Game and Fish saved some money by opting to do without a few amenities, including a generator to keep the headquarters going when the power goes out. The large generator could have cost more than $100,000, Smith said.

“We didn’t get everything we asked for, but we’re trying to make it a great work environment for us and something that serves the public,” he said.

Just like a family moving to a new home, there is likely to be some fond memories left behind in the undersized, inefficient offices. Although he worked off-site for a few years in the past three decades, terrestrial habitat biologist Jerry Altermatt has worked in the soon-to-be-former headquarters the longest; he started with the department in Cody in 1992. When asked if he’d miss the place, Altermatt laughed and quickly replied “no.”

The only reason Altermatt will be looking back once the move is completed will be for sentimental reasons, he said.

The department is planning for a grand opening celebration next year, but no date has been set at this point.