A newer program at Powell Middle School is starting to see success, as the girls’ club soccer team defeated Worland 7-0 on April 7 and Rawlins 9-1 on Saturday.

After COVID-19 canceled their … 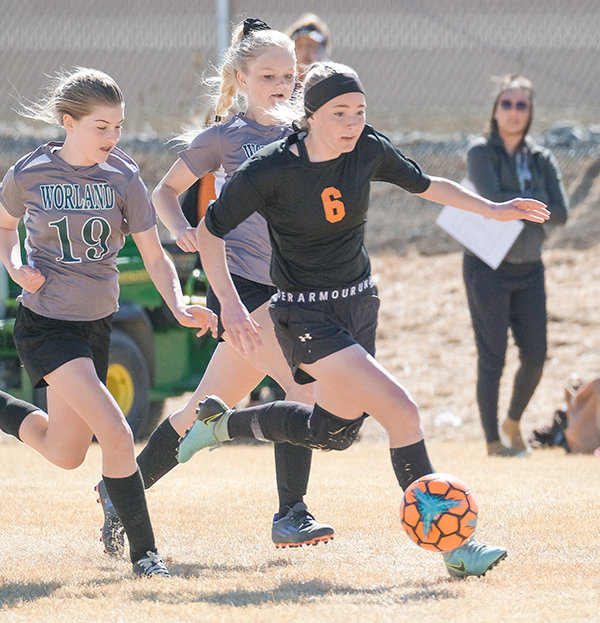 Cubs forward Ivy Agee pushes the ball upfield early during their game against Worland on Thursday, April 7. The Cubs defeated Worland 7-0 and Rawlins 9-1 on Saturday to start their season strong.
Tribune photo by Seth Romsa
Posted Thursday, April 14, 2022 8:15 am
By Seth Romsa

A newer program at Powell Middle School is starting to see success, as the girls’ club soccer team defeated Worland 7-0 on April 7 and Rawlins 9-1 on Saturday.

After COVID-19 canceled their first season as a program, the Cubs are competing for the second straight year — and seeing early success.

In their first game of the 2022 season, the Cubs started strong, as Ava Gilliatt scored in the first minute of the contest against Worland.

The team consists of both seventh and eighth graders and the Cubs dominated throughout the contest.

“The first game went pretty well and the quick early goal from Ava Gilliatt really helped solidify the thoughts on the formation,” Cubs coach Callee Erickson said. “Honestly these young ladies are remarkable in that no matter what level each player is at individually, they are all hard-working and respectful and wanting to get better.”

After the success in front of the home crowd on April 7, the Cubs made a short trip to Worland to take on Rawlins in their second game of the season.

Coach Erickson said the team’s main objective is for the players to grow individually and as a team, while helping each player gain a better understanding of the game as a whole.

“We are blessed to have some strong players leading the group; however, for the team to be successful, every member has to contribute,” the coach said. “The goal is to simply add a strong group of ladies to the high school team each and every year.”

The  middle school soccer programs are not officially sanctioned or funded by the school district. A club team must have three years under its belt before a vote can be taken by the school board on whether to fund the team.

Although the club team wasn’t able to play in 2020 due to COVID, it counted toward the three years, meaning the club could become eligible for funding following this season.

The middle school girls will take to the field one more time at home, playing Riverton at 3 p.m. today (Thursday) before hitting the road.