Heading into the postseason, the Trapper men’s soccer team was still struggling to find a team identity. The Northwest College squad went on the road and faced Casper College in the first round … 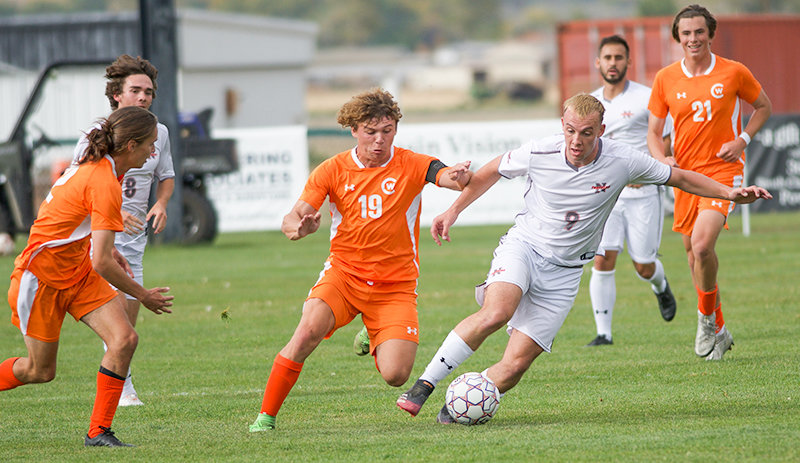 Thomas Mullen looks to break away from a Central Wyoming defender during a home matchup earlier this season. Mullen scored in the Trappers’ first round matchup against Casper, but NWC ultimately saw its season end in a 3-2 loss.
Tribune file photo by Seth Romsa
Posted Thursday, October 28, 2021 8:05 am
By Seth Romsa

Heading into the postseason, the Trapper men’s soccer team was still struggling to find a team identity. The Northwest College squad went on the road and faced Casper College in the first round of the Region IX tournament, narrowly losing the contest 3-2.

Though the Trappers struggled to respond from goals most of the season, they answered the call this time.

Just a minute later, Senri Nakamura scored the equalizer, putting the shot over the keeper’s head to even the match 1-1 in the 19th minute.

“Early on we were defending in numbers, cutting off their passes and taking away their strengths,” NWC coach Rob Hill said.

With an improved work rate the Trappers continued to pressure Casper, searching for a goal to take the lead. NWC would get that goal.

About 10 minutes after the Trappers equalized, Thomas Mullen found the back of the net off a good piece of play from Cody Shrum, and Sonny Bizure’s cross found Mullen to put the Trappers up 2-1.

Heading into the half leading 2-1, the Trappers were in the driver’s seat.

Unfortunately, tired legs and injuries from earlier in the season popped back up, which led to success for Casper.

The Thunderbirds found their equalizer from Jesper Van Halderen in the 77th minute, setting up an intense final 10 minutes of the match.

Casper continued to press and took the lead with just over two minutes left on a goal from Vitor De Lima, giving the Thunderbirds the dramatic 3-2 victory over the Trappers.

“Credit to the guys they came out and played hard together,” Hill said. “Unfortunately the result was not there but there was a massive improvement.”

In a season with flashes of potential, the Trappers were never able to find a groove as they struggled to find an identity. NWC is expected to return around half of the team next year, which means Hill will need to begin finding new players that will fit in with the returning freshman.

“You need to be patient in getting the right people, but also making sure they do not go to the wrong place,” Hill said.

The coach said he has made some verbal offers to recruits, and may have some signings over the next month, during the early signing period.

The team is set to move into its offseason workouts which will include indoor lifting and futsol throughout the winter, before moving to get ready for their four contest dates in the spring.