With the season opening in just over two weeks, the Northwest College men’s basketball team hosted a pair of four-year colleges on Saturday as they continued their preseason slate. 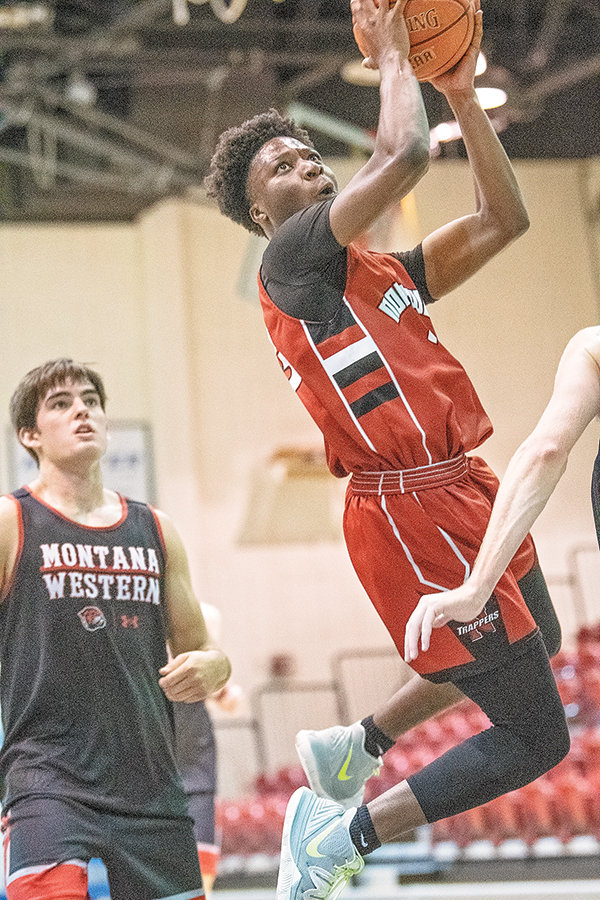 Oluwaseyi Oyeku goes up for a layup against Montana Western on Saturday. The Trappers played two games on Saturday as they continued their march through their preseason schedule.
Tribune photo by Carla Wensky
Posted Thursday, October 21, 2021 8:15 am
By Seth Romsa

With the season opening in just over two weeks, the Northwest College men’s basketball team hosted a pair of four-year colleges on Saturday as they continued their preseason slate.

The day began with the Trappers squaring off against Montana Western College’s varsity team in three halves, with the first two played in a game-like scenario with clock stoppages and the third featuring a running clock.

“I think we saw where we are at,” coach Jay Collins said.

Collins said the Trappers were able to see many things they were good at to begin the year, and where they have already improved from the previous weekend of preason play.

The second scrimmage of the day ran like a normal game — though the score was reset after the first half — with the Trappers facing off against the Rocky Mountain College varsity squad.

The first half of the scrimmage had the Trappers and Battlin’ Bears running up and down the court in a tight contest, as both teams sought to push the pace early on.

Rocky pulled away in that first half after some streaky shooting by the Trappers allowed the Battlin’ Bears to push the ball up court fast off the rebound and score quickly.

“Watching the video we were right there,” Collins said. “We made a couple mistakes and they shoot the ball well. It came down to they shot it really well and we missed open shots.”

Moving into the second half, the Trappers went toe-to-toe with Rocky, finding new success by getting the ball into the post. Big men Vladimir Vondra and Juan Camargo Tellez were able to either create their own offense or redistribute and help swing the ball around the perimeter.

Collins said that one of the things the team will need to work on going forward is patience — but that does not mean that he wants his team to stop shooting, as his guards found success from the perimeter.

Throughout the game the Trappers began working on their full-court press as they just recently installed the defensive package.

“Now that we have it on film we can watch it and see where the adjustments need to be made,” Collins said.

The Trappers unfortunately lost the second half off a stolen inbound pass by Rocky that turned into a layup and a one-point victory for the Battlin’ Bears.

However, Collins was not upset it happened, as he believes it was a difficult scenario to replicate during practice; being able to experience a moment of pressure during the preseason will help them going forward.

“It was a good day for us,” Collins said.

Both the men’s and women’s teams are hosting scrimmages today (Thursday). The Trapper men will face Montana Northern University at 2:30 p.m. That will be followed by a scrimmage between the Trapper women and the redshirts from the Trapper men’s program. Tip off for the scrimmage is expected to be between 3:45 p.m. and 4 p.m.