Scott McKenzie paced down the halls at Powell High School, reminiscing about his 30 years on staff. 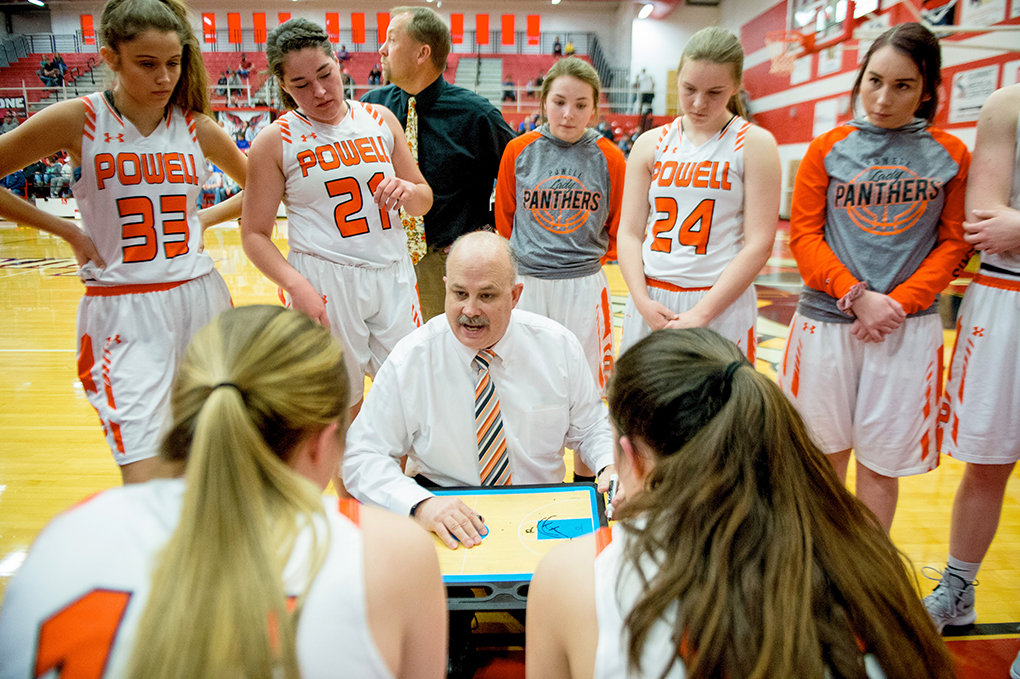 Longtime Powell High School coach Scott McKenzie — seen here leading the Panther girls’ basketball team at last year’s state tournament — has been named as a 2020 inductee to the Wyoming Coaches Association Hall of Fame. McKenzie was set to be formally inducted into the hall at a banquet this month, but that’s been pushed back to 2021 due to the pandemic.
Tribune file photo by Mark Davis 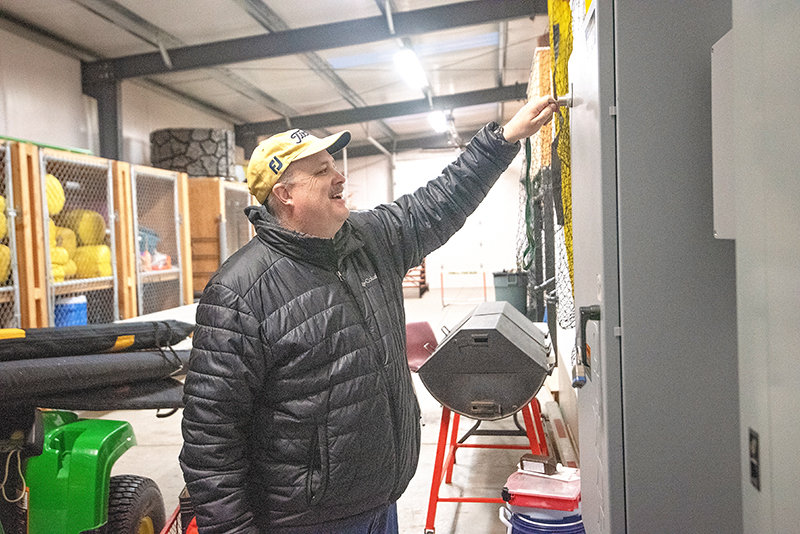 Scott McKenzie, Powell High School’s activities director and a new member of the Wyoming Coaches Association Hall of Fame, waits for the lights at Panther Stadium to turn on to kick off an April 10 ‘Be the Light’ event. The event was meant to show support for the PHS Class of 2020, along with medical workers and athletes and coaches whose spring activities were canceled due to the pandemic.
Tribune photo by Carla Wensky
Previous Next
Posted Thursday, July 2, 2020 8:20 am
By Carson Field

Scott McKenzie paced down the halls at Powell High School, reminiscing about his 30 years on staff.

The school’s longtime former girls’ basketball coach and current athletic director walked past the cafeteria and into the main hallway. McKenzie glanced up to his left at the plaques hanging on the wall, honoring the school’s members of the Wyoming Coaches Association Hall of Fame.

On the wall, the names of several greats in Powell’s history stand out in bold lettering: Keith Bloom, Ron Laird and other esteemed Panthers all have their headshots displayed with accolades listed below, forever etched into the school’s record book.

Realizing he’ll soon have a similar plaque next to those legends, McKenzie grinned.

“It’s the highest honor that you can get,” he said. “There’s some big-time Powell names up there, so it’s just an honor to have my name beside them. It’s very humbling.”

McKenzie is one of four members of the 2020 Wyoming Coaches Association Hall of Fame class. During his tenure at PHS, he has coached volleyball, golf and football, but McKenzie is best known for his success on the basketball court.

When McKenzie joined the PHS staff in 1990, he was fresh out of a student-teaching program at Newcastle High School. He coached the sub-varsity Panther boys’ basketball teams under Laird, who led the varsity squad.

According to Laird — who is now the commissioner of the Wyoming High School Activities Association — McKenzie’s dedication early on foreshadowed his successful career.

“Coach McKenzie was a great assistant during my tenure in Powell,” Laird said. “He was very loyal and, as JV coaches sometimes have to do, was willing to make the necessary sacrifices for the better of the varsity team. We created a friendship through our years together that continues on today.”

McKenzie coached boys’ basketball for 17 years — including two as head coach — before a life moment changed his course: the birth of his twin daughters, Karlie and Katie.

When his daughters were born, McKenzie decided to pursue coaching on the girls’ side of basketball. He started coaching the girls’ team at Powell Middle School and eventually worked his way up to head coach of the varsity squad at PHS.

In seven years as the varsity head coach, McKenzie compiled a 124-59 record and won the 2015 3A State Championship. His teams also finished third at state twice.

He wrapped up his coaching career in 2019 — Karlie’s and Katie’s senior year at PHS.

“It was surreal,” McKenzie said. “I knew when they were fourth graders my goal was to coach through their senior year. But to coach my daughters and their friends was just wonderful. It was wonderful to hang it up with all of them.”

Every team McKenzie has ever coached has one thing in common: discipline. According to Troy Hildebrand, an assistant for the girls’ team, ensuring that the players were in order helped McKenzie’s teams sustain success.

“He was a coach that believed in structure and discipline on both ends of the floor from his teams,” Hildebrand said. “Scott and I shared a common philosophy in regards to coaching basketball which helped us work well together over the years.”

While McKenzie certainly kept his teams intact, it wouldn’t have been possible if the girls weren’t coachable.

“The girls play hard for you, they don’t claim to know all the answers and they’re coachable,” McKenzie said. “It was a wonderful experience.”

McKenzie made an impact on countless athletes in his 30 years of coaching. Under his wing, he witnessed the girls mature on and off the court.

Not even winning a state title can compete with that.

“The biggest thing is just watching them grow into young women,” McKenzie said. “Many of them will someday be moms and wives, and just helping them believe in themselves and believe in anything they can set their minds to is wonderful.”

McKenzie’s days of coaching from the sidelines are over, but his involvement with PHS is not. He now serves as the Panthers’ activities director, overseeing the school’s various programs.

While coach of the year awards are being hand-delivered this week, the association felt an honor as significant as the Hall of Fame “deserved the full pageantry of a banquet,” Lashley explained. “We realize that induction will be delayed, but we wanted them honored in a banquet hall in front of their peers.”

Though he’s already secured his Hall of Fame status at Powell High School and in the state of Wyoming, McKenzie has the chance to build on his already-cemented legacy.

“I’m sitting in my dream chair,” McKenzie said. “I’m such a sports nut and such a Panther fan in all the athletics and activities. It is wonderful to still be close and be a part of everything and watch our coaches do their things with our amazing kids.”