Tracy McArthur stepped onto the stage with arms outstretched to receive her grandchildren as she was named Teacher of the Year for Park County School District 1. 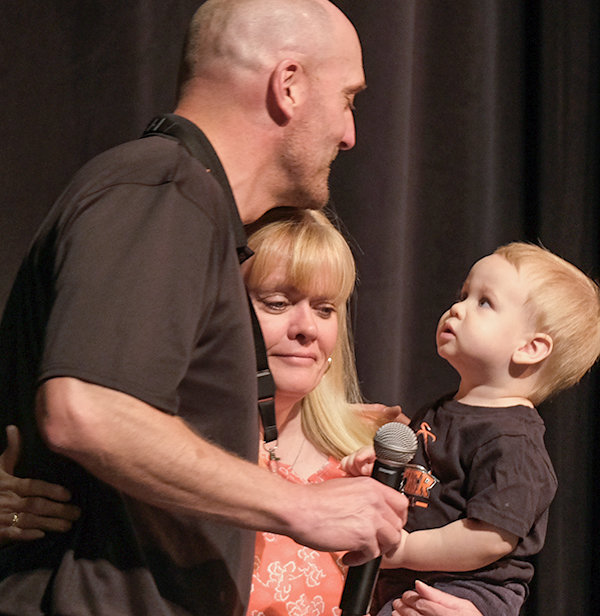 PHS Principal Tim Wormald (left), Tracy McArthur and her grandson enjoy the moment after McArthur was awarded teacher of the year.
Tribune photo by Braden Schiller
Posted Tuesday, May 24, 2022 8:15 am
By Braden Schiller

Tracy McArthur stepped onto the stage with arms outstretched to receive her grandchildren as she was named Teacher of the Year for Park County School District 1.

“I didn’t know that my husband or my daughter, with the grandkids, were here until Mr. Wormald actually called them out and said, ‘McArthur family come out of the sound booth,’” McArthur said.

McArthur is an English teacher at PHS and has been a Park County School District 1 teacher for 18 years. She was named the Teacher of the Year for 2022 during a PHS assembly on May 11.

McArthur attended the 9:45 a.m. assembly not knowing she would be honored. McArthur, who is also a track coach, was out of town when the rest of the high school staff received the good news.

“Yeah, Mr. Wormald had a call from Mr. Curtis and he told the staff what the assembly was for at the staff meeting. The track team was in Thermopolis and so I had no idea but yes, everybody else in the building knew but me,” McArthur said.

During the assembly Superintendent Jay Curtis took the stage to announce the recipient without giving too much away.

“She has a way of captivating students,” Curtis said of McArthur. “I appreciate that she is respectful to students and really wants to see them succeed. Her classroom presence is inclusive, encouraging of participation and sharing. She sets the standards that others should follow in terms of her teaching style, communication abilities and demeanor.”

Further evidence of McArthur’s way with students: She was recommended for the award by a student.

“I have him for U.S. History, AP Language and then first semester,” McArthur said of the student who nominated her. “I also had him for American Lit. So he literally spent half the day in my classroom.”

McArthur, known for placing a high value on family, appreciated having her grandchildren present, but noted her family is larger than some may think.

“I have a huge love of family, and so being able to have them be there and be a part of it was pretty special,” McArthur said. “But I think just having the whole student body and my coworkers there ... they’re my extended family.”

“So that’s the next step,” McArthur said. “But out of obviously all the teachers in Park County school district, number one, they could have chosen a lot of people because I think we have an outstanding staff. So I’m pretty humbled that I was the lucky recipient this year.”