Man on probation for crash alleged to have gotten in another

A Powell man on probation for a high-speed crash in a residential neighborhood in May is now facing allegations that he hit a vehicle while driving under the influence of alcohol.

Man on probation for crash alleged to have gotten in another 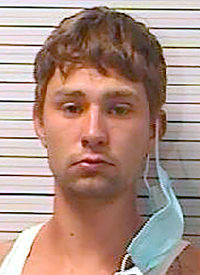 A Powell man on probation for a high-speed crash in a residential neighborhood in May is now facing allegations that he hit a vehicle while driving under the influence of alcohol.

Riley S. Birky, 20, was arrested on the evening of Aug. 6, after he reportedly rear-ended a vehicle and then drove back to his home on Avenue C. Powell police say Birky appeared to be intoxicated and that, after his arrest, he attempted to flee the booking area.

That has led to four misdemeanor charges: driving while under the influence of alcohol for a second time in 10 years, underage drinking, failure to stop and report damage to an attended vehicle and interference with a peace officer. The Park County Attorney’s Office is also seeking to revoke Birky’s probation from the May 13 crash. In that incident, police said Birky had been driving 40-45 mph on Sunlight Drive and looking at his cellphone when he drifted to the wrong side of the road and collided with a parked Ford Mustang.

As of Monday, Birky remained in the Park County Detention Center, with bond set at $5,000.

At an initial appearance in Park County Circuit Court last week, Birky pleaded not guilty to the new charges and formally denied violating the terms of his probation.

However, while making his case to be released on bond, Birky offered that, “I know I really screwed up.”

A citizen called Powell police on the evening of Aug. 6 after being hit by the driver of a silver 2003 Infiniti FX45. Officers found the FX45 parked at Birky’s residence on Avenue C, with some front-end damage.

After five minutes of knocking, Birky opened the door, appearing “very nervous and jittery,” smelling like alcohol and slurring his speech, Officer David Salters wrote in an affidavit. Birky eventually admitted to drinking beer about an hour earlier and to hitting the other vehicle, the affidavit alleges.

“Riley [Birky] stated that he only hit his trailer hitch and that it didn’t cause any damage and he didn’t know why the victim was so worried about it,” Salters wrote.

Birky was ultimately arrested and a breath test pegged his blood alcohol content at 0.186% — more than twice the point at which a person is considered too intoxicated to drive.

While being booked at the Powell Police Department, Birky became upset and attempted to flee from the booking area, Salters wrote. That led prosecutors to charge him with a count of interference with a peace officer.

“... With what’s charged right now, he’s obviously a flight risk and definitely a safety hazard,” Deputy Park County Attorney Jack Hatfield said in arguing for bond to be set at $5,000. “This violation of his probation shows that he is unwilling to submit to court orders.”

At the time of the Aug. 6 incident, Birky was on probation for possessing a controlled substance and driving with a suspended license; both of those offenses — plus a citation for careless driving and a failure to report a crash — stemmed from the May 13 crash on Sunlight Drive and a separate collision on Avenue C. Hatfield said the defendant also had a prior DUI conviction in 2017.

In asking to be released on a signature bond while the new case was pending, Birky acknowledged he’d been in Circuit Court a couple times in the last few years and said he understood prosecutors’ concerns. However, Birky said he was the only source of income for his family and that he needed to pay bills and prior court fines.

“I will not be a flight risk, and I will not be an endangerment to society,” he told the judge, “... I give you my word, your honor: You will not see me on another charge outside of this if you could just please try to help me with this bond.”

Birky said he’d started drinking after the death of a family member earlier this year and that the couple days he’d spent in jail had brought “a very big realization.”

“... I want to go to AA meetings and I want to start in a treatment center when I get out of here,” he said. “It’s just a matter of doing that.”

However, Judge Bruce Waters said he felt that, given the allegations in the case, the bond recommended by prosecutors was appropriate.

The next hearing in the case is a pretrial conference, tentatively scheduled for Oct. 4.