As I start my 35th year in police work, and as we begin 2020, I was recently working night shift, driving the streets of Powell in the early morning hours. I began to think about certain calls that I … 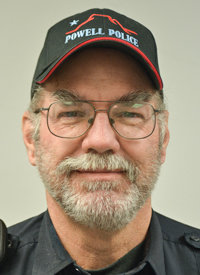 As I start my 35th year in police work, and as we begin 2020, I was recently working night shift, driving the streets of Powell in the early morning hours. I began to think about certain calls that I have handled over the years in Powell and at my former police department in Florida, where I worked for 21 years. In almost all of the calls that I have handled that involved some type of enforcement action, there is a certain thing in common with all of them — and that is the person or suspect made a bad choice.

I look back at the drunk driver who turned in front of a vehicle driven by a 19-year-old female with her 6-year-old twins, brother and sister, in the back seat. The vehicle that was struck was forced into a light pole and the 6-year-old boy was killed. I looked in the back seat and saw another officer holding the boy with a look of utter frustration on his face. The drunk driver was arrested, convicted at trial and did a few years in prison; he made a bad choice that night and a beautiful child was gone forever.

I can still see the face of the 28-year-old man who died of a drug overdose. I can still hear the screams of his sister at the hospital, not wanting to believe he was dead. The man made a bad choice by using illegal controlled substances and his family has to live with it.

I think back at the young man who robbed a gas station not realizing the clerk knew him. The offender was arrested when he was found near the store. The suspect made a bad choice and he spent a year in jail thinking about it.

I can think of many, many other calls I have handled which involve alcohol or drugs. Statistics show 85% of all of Powell police arrests involve drugs or alcohol. We can debate for hours the difference between disease, addiction, weakness, experimentation, peer pressure and other things that a person thinks about before he/she ultimately decides to put a foreign substance into their body, but it is their choice to do it.

I have learned over the years that the only difference between anyone is the choices we make. I have made some bad choices over the years. Eating an unhealthy diet and not exercising lead to my heart attack in 2009 and probably lead to my open heart surgery in 2011. Being diagnosed with Hodgkin’s Lymphoma in 2019 was NOT a choice, it is a disease that neither I nor anyone else has any choice on whether they get it or not, but we do have a choice how we will respond to the diagnosis. Luckily I was treated and my chance of it not coming back is 97%, which are pretty good odds.

I fondly remember the two foster children my wife and I have had and loved like our own over the last few years. They both came from drug-using parents; fortunately, the parents have changed their ways and now have their kids back. But I have seen many people’s lives and families ruined over the use of alcohol, pills, methamphetamine and other drugs.

Many years ago I went to a family dispute and when I walked into the apartment, I saw there was no TV, no stereo, no toys and very little things of value. The man in the house explained to me that he was addicted to crack cocaine and had no control over his life. The drug controlled him so therefore he sold everything of value in his apartment to satisfy his drug habit. The sad part was he had a wife and a few small kids who were innocent victims because this man made a choice to start using crack, so it destroyed his life as well as his family. Pretty sad story. I can only hope he eventually made the right choice and did the right things to provide for his family.

Help is available, but a person has to want it and make the sacrifices to get clean. It may not be easy, but it is the right thing to do for you and your family.

Police work is not all about making arrests, issuing citations, mediating disputes, writing reports and the many, many other things we do. We are in the job to help others, but we can’t help those who won’t help themselves. Citations and arrests are meant to try to deter future bad choices and behavior. They are meant to try and change bad habits and to get a person to make better choices. My idea of a perfect day in police work is no enforcement actions like traffic stops, citations or arrests. All of this means that people made the right choices.

To those who continue to drive under the influence of alcohol and/or drugs, drink excessively, use illegal substances, steal from others and commit illegal acts, law enforcement will be there to enforce the law. This is what police officers, deputy sheriffs, state troopers, game wardens and other law enforcement officers do, we enforce the law and we will continue to do so.

It is YOUR decision to make good or bad choices; it is our job to enforce the law and sometimes try and save you from yourself. Think about how bad choices you are making are affecting yourself, your health, your job situation, but most of all think about how it is affecting your family. Life is all about making choices — make the RIGHT choice!

(Matthew Brilakis is a Powell police officer. He worked at the Coral Springs, Florida, Police Department years before joining the Powell PD in July 2007.)