After 38 years of service, the leader of Park County’s road and bridge operations in the Cody area has retired.

County commissioners honored Ron Nieters on Tuesday with a reception, a … 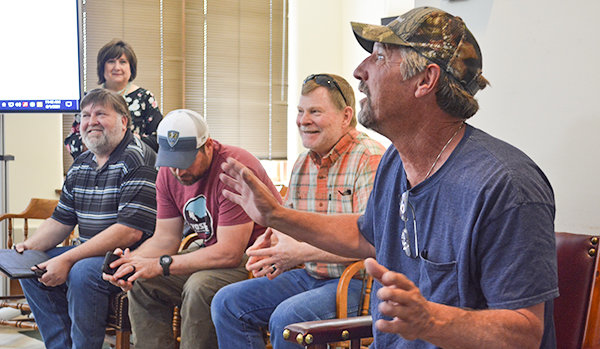 After 38 years of service, the leader of Park County’s road and bridge operations in the Cody area has retired.

County commissioners honored Ron Nieters on Tuesday with a reception, a plaque, a framed picture and some words of gratitude.

“We sure appreciate what you’ve done over there,” Commission Chairman Lee Livingston told Nieters, “and we’re damn sure going to hate to see you go.”

In recent years, Nieters helped reopen the Squaw Creek Road in Crandall after some massive mudslides wiped out a portion of the route in 2018 and in 2019, he helped clear potentially damaging ice from a bridge along the Lower Southfork Road.

“I think every organization, construction crew, whatever it is, needs that guy that will smash through the boundaries and just go get it done,” said Park County Engineer Brian Edwards. “And Ron’s that guy.”

Edwards, who served as Nieters’ boss for the last seven years, said he’ll miss that “get it done” initiative.

“He’s done a lot for road and bridge and [leaves] huge shoes to fill,” Edwards said.

Nieters said his tenure with the county was educational.

When Commissioner Livingston jokingly suggested that Nieters could stay on as a provisional employee, he didn’t immediately jump on the offer, but “you’ll see me again, I’m sure,” Nieters said.