Regional ranchers are advocating for the passage of a federal bill calling for increased cash negotiation in the cattle market, as beef prices soar but the payment for cattle remains stubbornly … 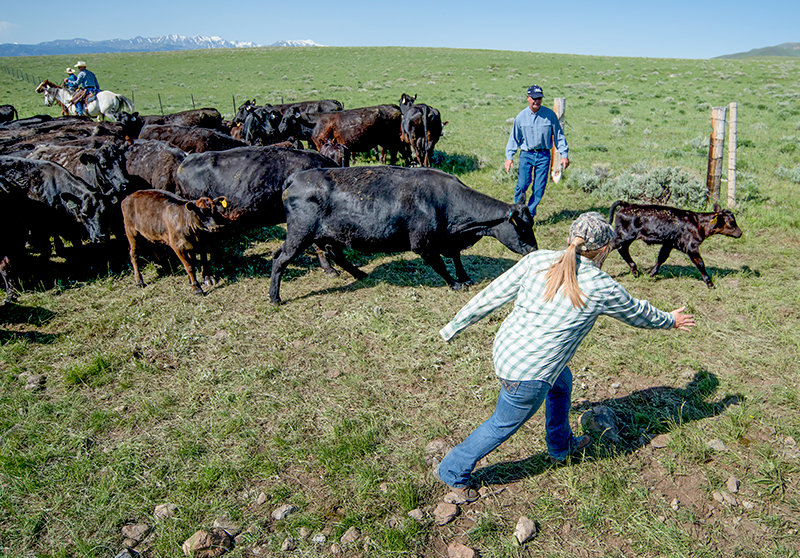 Cows are separated from their calves for spring branding at the 91 Ranch near Meeteetse. Regional ranchers are advocating passage of a federal bill calling for increased cash negotiation in the cattle market as beef prices soar, but the payment for cattle remains stubbornly low.
Tribune photo by Mark Davis
Posted Thursday, May 12, 2022 8:05 am
By Ryan Fitzmaurice, Lovell Chronicle Via Wyoming News Exchange

Regional ranchers are advocating for the passage of a federal bill calling for increased cash negotiation in the cattle market, as beef prices soar but the payment for cattle remains stubbornly low.

The issue, according to Brett Crosby, a cow-calf rancher and a commodity market analyst, is a concentrated market with an increasingly rigid price structure and a growing lack of competition. Four big meat packers — Cargill Inc., Tyson Foods, JBS USA and National Beef — control more than 80% of the nation’s beef supply. The four packers have together made formula trading the standard in the market, over negotiated cash trade.

The road to today started in 1999, when the U.S. Congress made mandatory price reporting the law of the land. The practice allows for open, transparent price discovery and universalized access to market information for ranchers.

But it also allowed for a new way to price cattle.

Using the information provided in the livestock mandatory price report, packer companies have based most of the market on formula pricing, creating a more universal price for cattle in replacement of a negotiated price between a feedlot and packer operation.

“When the (Livestock Mandatory Reporting program) went into effect, it gave packers a huge data set,” Crosby said. “They started using a formula. They just told feedlots, instead of negotiating for the cattle every week, we’ll give you the average price.”

The method had some merits at first, Crosby said.

Alongside increased efficiency, the formula also gave incentive to ranchers to breed cattle with good carcass characteristics, creating a more standardized level of quality cattle within the market.

But today, the practice is cannibalizing the industry, Crosby said.

Up to 80% of all cattle are purchased under formula pricing, while only 20% are negotiated between a buyer and seller. A number of plants now purchase their inventory exclusively through formula pricing.

“Without intervention, the trend is expected to continue until negotiated trade in at least one major region is virtually eliminated,” Crosby said.

With negotiated trade decreasing dramatically, the industry not only has far less competition, but the negotiated market, upon which formula prices are based, is also far more vulnerable to manipulation, keeping payouts artificially low.

Accurately priced formula trade relies on the accuracy of the prices reported to the market, and discrepancies are beginning to be seen. Ironically, accurate data relies on the negotiated trade, the practice formula pricing is eliminating. In some regions, negotiated trade is less than 10% and is not a significant enough sample size to ensure an accurate price for cattle.

But cattle feeders are stuck with it. In an already thin market, smaller farmer-owned feedlots have little room to negotiate.

“It all trickles down to the cow calf guy,” Crosby said. “If the feedlot doesn’t make money, they can’t bid much for cattle here. For those of us who bring cattle to a feedlot and sell them, the formula trade is the only way a little guy can sell cattle. You don’t get a choice; you don’t get to say no. You have to commit your cattle on a Tuesday, and they’ll say you’ll get whatever the Nebraska average price is [for the coming week].”

According to Jess Peterson, a rancher in Eastern Montana and the executive director of U.S. Cattlemen’s Association, this dynamic puts local cattlemen, who typically have a higher quality cattle than other U.S. regions, at a particular disadvantage.

“Folks in Wyoming need a competitive market for their cattle, but the meat packer will utilize lesser quality cattle so they can put pressure on quality cattle and use that leverage to lower the prices,” Peterson said. “Higher quality cattle are best procured in a cash agreement. If you’re going to utilize the current system, you need to be active in the cash market. A portion of the cattle need to be purchased on a cash basis.”

Leo MacDonell, a Montana rancher who sits on the board of directors of the U.S. Cattlemen’s Association, said the current market has resulted in “sweetheart deals” between major packers and lower quality markets.

Some ranchers have seen their profit decrease by upward of 300% in recent years, MacDonell said.

It helps, Peterson said, to think of a cattle lot like a vehicle lot. A company selling vehicles wouldn’t keep many customers if they didn’t make room for negotiation.

Regional ranchers see a possible solution in the Cattle Price Discovery and Transparency Act of 2022, co-written by Nebraska Sen. Deb Fischer and Iowa Sen. Chuck Grassley.  U.S. Sen. Cynthia Lummis is a co-sponsor of the bill.

The primary purpose of the act is to require that a minimum percentage of cattle be bought and sold through negotiated cash deals, creating a transparent pricing mechanism and thereby ensuring a more competitive price. The legislation also contains multiple provisions giving ranchers and feedlots more market data, such as the number of steers being processed by a packer, giving sellers more leverage in negotiations.

“Right now, we don’t know how many they have going into processing in the next few weeks,” Peterson said. “If you know how many cattle packers are processing, you can base your price on the demand.”

Some may view it as more red tape, making a complicated market even more complicated, but Crosby argues the bill just fixes existing regulation.

The legislation is currently being considered by the Agriculture Committee and is expected to hit the floor of Congress this month.

Peterson said the impact of more accurate cattle pricing will prove a boon to local communities.

“Any amount of increased value will go right back into the economy,” Peterson said. “…It’s a stimulus package.”