The venue was the television show “Forged in Fire,” a popular reality show airing weekly on the History Channel. The show follows four bladesmiths through a three-round contest to forge bladed weapons.

After a lengthy audition process, … 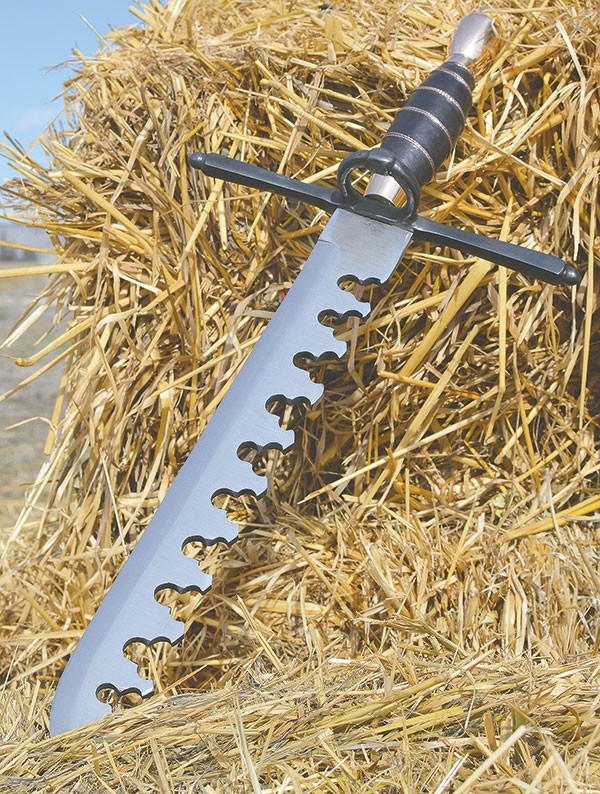 Pictured is Erich Ouellette’s ‘sword breaker,’ a knife he created for the television show ‘Forged in Fire’ on the History Channel. Ouellette finished as runner-up in the episode ‘Sword Breaker Redemption.’
Courtesy photo
Posted Thursday, June 15, 2017 2:36 pm
By Don Cogger

Finishes as runner-up with ‘sword breaker’

Late last summer, local bladesmith Erich Ouellette was given the opportunity of a lifetime: a chance to compete against other knife makers on a national stage, with a $10,000 prize and bragging rights up for grabs.

The venue was the television show “Forged in Fire,” a popular reality show airing weekly on the History Channel. The show follows four bladesmiths through a three-round contest to forge bladed weapons.

After a lengthy audition process, Ouellette was chosen to compete and flown to New York City to film. But national glory and a nice chunk of change was not to be, as the longtime Powell resident was the first bladesmith eliminated.

“I think I just got caught up in the whole excitement of the experience,” Ouellette said. “That may have hurt me a bit.”

But the History Channel was not finished with Ouellette quite yet. Each season of “Forged in Fire” features a “redemption” episode, where popular contestants who came up short the first time around are invited back for another shot. Ouellette knew there was a chance he might be brought back at some point in the future, and in March he got an email about a last-minute opening on the show. Three days later, he was on a plane.

“I was supposed to be leaving to go back in the oil field at the time they contacted me,” Ouellette, a drilling consultant, said. “I was scheduled to leave March 12, and on March 9, I get an email from an executive producer on the show. He said they had someone cancel on a redemption episode, and would I be interested. I emailed them back and said, ‘Absolutely.’ The only problem was, they wanted me there on Saturday, and this was Wednesday.”

After discussing it with his wife — who said, “You have to go” — and clearing his work schedule, Ouellette decided it was an opportunity he couldn’t pass up.

“It all happened really fast,” he said.

Having a better idea of what to expect this time around, Ouellette focused more on time management — an aspect he struggled with on his previous episode.

“The last time I was there, I was there for the whole experience,” Ouellette said. “Had I been a little more focused on the task and not so much of what behind-the-scenes was like, it may have been different. This time, I knew what I was there to do, and focused on getting it done in the time I had to do it.”

This time around, Ouellette was competing against three other bladesmiths who had been on the show. Having that familiarity in common made for a relaxed set.

“The guys I was on with this time were just phenomenal,” Ouellette said. “We all had the same mindset going in. We laughed and joked more on this episode than I’ve seen on any other episode. We all knew what to expect, so we were all comfortable. It was a great experience, even better than the first time.”

Ouellette’s strategy worked, as he breezed through the first two rounds and advanced to the finals, squaring off against Texas bladesmith James Huse.

One advantage to making the “Forged in Fire” finals is the last challenge is conducted on your home turf. A film crew followed Ouellette back to Powell, documenting the process as he forged his final blade, a “sword breaker” made popular in the Middle Ages. Designed as an off-hand weapon, the sword breaker was a dagger with large serrations along one side of the blade, much like a comb. The serrations can trap an opponent’s blade, and, with the right amount of torque, theoretically snap it in two.

Ouellette and Huse were given 45 hours over five days to complete the sword breaker: Five hours on day one to collect materials and come up with a design and 10 hours a day over the next four days to construct it. The work is timed to the minute, with the crew documenting his stopping point every day.

“Again, it was time management,” Ouelette explained. “But now I was in my own element, in my own shop, so it was very easy. And I’m very, very pleased with the piece I turned out.”

Aside from an ill-timed fight with his drill press on day three, the construction of the sword breaker went off without a hitch. The real test of nerves was reserved for the trip back to New York City for the final judging. Once the judges critiqued the final product, the sword breakers were put through a series of tests.

“My critique was terrific, I got nothing but great feedback,” Ouellette said. “Then we went to the testing phase. It was then that we both began getting the whole ‘lump-in-the-throat, holy crap, there’s so much that can go wrong’ thing. All we could do was really laugh about it at that point.”

The first series of tests the blades went through are known as the “trifecta,” which includes a rope cut, a beef cut and cutting a salmon in half. That’s followed by a test involving ballistics dummies and finally a test that mimicked what the blade was designed for: Capturing a blade.

“Both of our blades performed flawlessly in the trifecta,” Ouellette said. “I thought mine performed a little better than his when we got to the dummies. Where he [Huse] got me was on the teeth test, his teeth locked on to the test rapier better than mine.”

Though he came home once again without the big prize, Ouellette said he’s proud with how much better he did the second time around. His appearance last season on “Forged in Fire” created quite a bit of interest in Prophecy Metal Works, his custom knives side business.

Ouellette’s family organized a watching party for the episode Tuesday night, with a variety of party foods and drink. Once the show was over, he said watching it wasn’t as tough as he thought it would be.

“I thought it turned out great, it was fun to watch,” Ouellette said. “Making it to the finals and not winning was kind of a disappointment, but I forgot about that the minute I walked out of the building. It was just a fantastic experience.”

He thought about it for a moment.

“Well, except for the very end,” he said, smiling.

And should the History Channel one day come calling again, could the third time be the charm?

Ouellette laughed and shrugged his shoulders.

“We’ll see. I would definitely be open to it.”