The COVID-19 pandemic changed how we build homes.

“Over the years, we’ve done everything from custom homes to smaller jobs and remodels,” said Scott Brown, who has been … 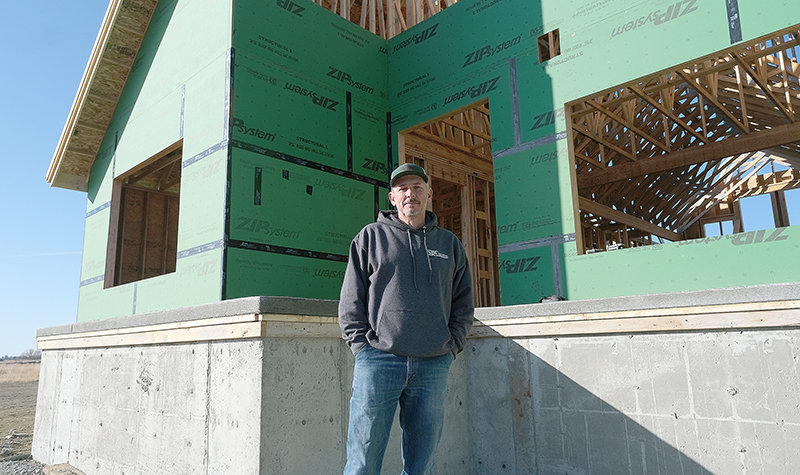 Scott Brown, owner of Scott Brown Construction, stands in front of a house he’s building noth of Powell. He has been working in home construction in Powell since he moved here in 1992. The COVID-19 pandemic has created a number of challenges as prices and delivery times grow.
Tribune photo by Kevin Killough 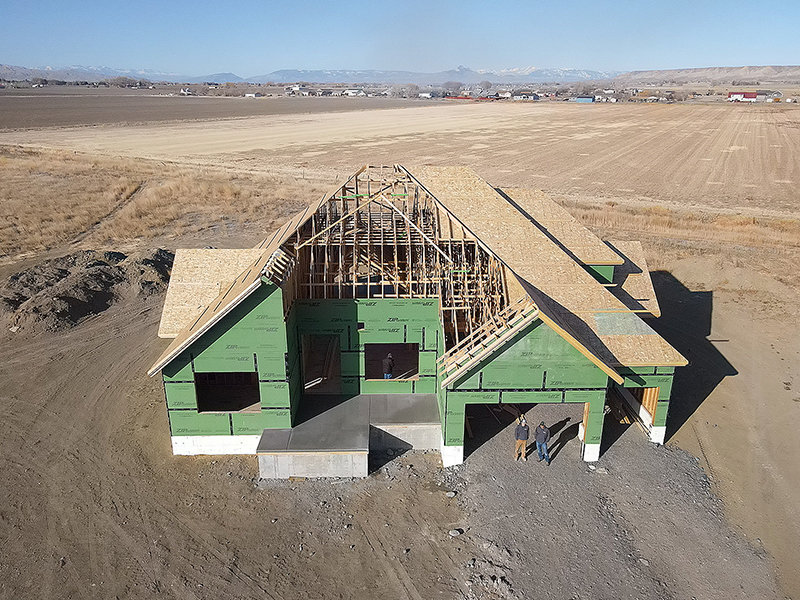 Brown and his son, Nate, stand in the garage of what will become Bill Just’s home. Brown said the complexity of the roof has been a challenge to construct. He hopes to have the project finished by next year.
Tribune photo by Kevin Killough

Brown built this 5,000 square-foot log home in Wapiti. He said they waited nine months for the log siding to complete the garage. They hope to have the house completed by mid-May.
Courtesy photo
Previous Next
Posted Friday, April 29, 2022 8:20 am
By Kevin Killough

The COVID-19 pandemic changed how we build homes.

“Over the years, we’ve done everything from custom homes to smaller jobs and remodels,” said Scott Brown, who has been working on homes in the Powell area since he moved here in 1992.

His company, Scott Brown Construction, has done some larger commercial jobs too, including the 12,000-square-foot New Life Church.

His clientele has changed a bit in the past few years. He used to do more work for first-time homeowners, including the small remodel projects. Now, it’s mostly custom builds for people who are moving to the area for their second or third home.

Among them is Bill Just, who purchased some land on Campfire Lane. Just was born in Powell, but his parents moved their family when he was about 5. Just has  lived in Canada and Texas, as well as Casper and Cheyenne.

His wife’s mother and sister live in Powell, so it was a good place for them to build a home. They looked around at various places around Powell, but the town “seemed to be the most land for the least cost,” he said.

Just’s vision for his home included a high, complex roof that required some advanced engineering on the trusses. He started out working with one contractor, who didn’t do the work properly. There were so many problems with the construction that it sat unfinished for a couple of years.

Brown said he was reluctant to take it on, but someone recommended Just give him a call.

“I wondered if I lost a bet,” Brown joked.

Despite the difficulty involved, Brown decided to help Just out, and Just said he’s grateful.

“He basically bailed me out and didn’t hold me for ransom,” Just said. “I think highly of Scotty and what he and his crew have been able to do for me.”

Even with a custom build that goes smoothly, building homes today is challenging. The cost of materials rises rapidly, and supply chain issues mean long lead times. Brown said it affects how projects are planned.

Some recent projects have been in the planning for over a year, and just when everything seems ready to go, material costs blow through the customer’s budget.

The lead times also make the builds less flexible. Brown used to frame up a house and then order the windows. It would be about four weeks before the windows would come in, which was just about the time they were ready to be installed.

In the meantime, with the frame up, the customer could walk through the project and get a real sense of what the finished product would look like. He might decide a window needs to be bigger or another window added.

It used to be easy for Brown to accommodate these changes. He’d order some new windows and get to cutting. Now, that can delay the project by three or four months. These days, he orders the windows before the foundation is poured, and changes after that delay a project by months.

“Anymore, we have to solidify things ahead of time,” Brown said.

He said anything that comes from overseas can have really long lead times. That really hits appliances and raw materials. While domestic products can be turned around faster, if they depend on raw materials from overseas, those can get delayed as well.

Brown said he does daily research into the cash stock price of materials, which tend to follow the retail price. That way, he can better predict when it’s a good time to buy materials to get the best price for his customers.

He said he’s seeing some signs that prices are starting to come down.

Brown said he saw this problem early on. He met with U.S. Rep. Liz Cheney in 2020 and showed her the prices on the five most common materials he purchases. At that point, there had been a 300% increase on some of it, and it’s only gotten worse since.

As interest rates rise, this too will help cool the demand for homes, which will bring home prices and material prices down. Brown said he doesn’t want to see first-time homebuyers priced out, as rising interest rates will do, but in the long-term lower demand can help smooth things out a bit.

“There has to be a healthy balance. I want a stable economy that creates good housing growth,” he said.

Brown has a few other jobs he’s balancing right now. He’s going to Just’s house “dried in and tied up” so the subcontractors can continue to work on it. They just poured the concrete on a custom job in Cooke City, Montana. In June, they’ll frame that house up and then come back and finish Just’s home. This summer, he’s also starting a three-bedroom house near Meadowlark Lake.

Then they get snowed in. First of June they’ll start that one.

Then they’ll finish up the one in Cooke City and come back and finish up Just’s. In the summer, they’re starting one near Meadowlark Lake. Contractors are seeing no shortage of work for the foreseeable future.