Around a quarter after nine Friday evening, a loud cheer echoed through the Capitol building.

“Well,” Sen. Mike Gierau, D-Jackson, said from his seat in the Senate chambers. … 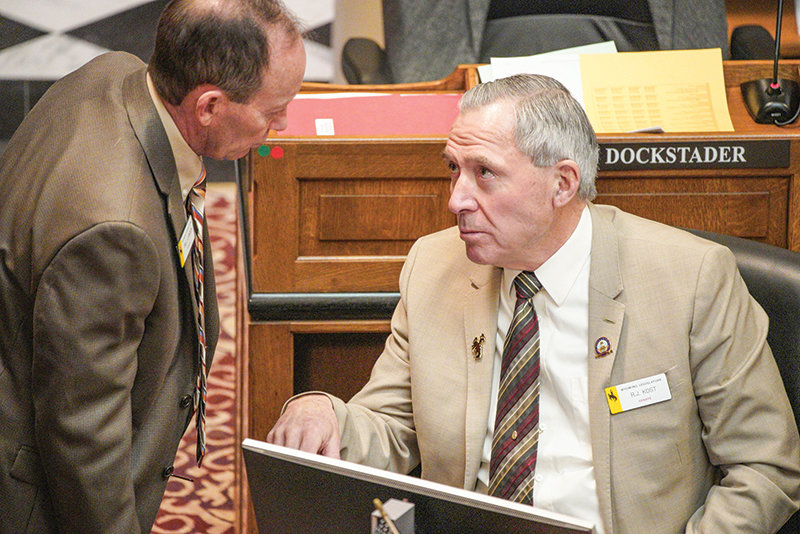 Around a quarter after nine Friday evening, a loud cheer echoed through the Capitol building.

“Well,” Sen. Mike Gierau, D-Jackson, said from his seat in the Senate chambers. “They must have figured out redistricting.”

Indeed, after a week of negotiations, the joint conference committee for redistricting came to a compromise in the final hours of the final day of the legislative session. Within an hour of the cheer’s echo through the Capitol, the bill had been approved by both the House and Senate. It was approved on a 44-12-4 vote in the House and on a narrower 17-12-1 margin in the Senate.

The bill’s approval marked the end of a months-long process that began in the Joint Corporations, Elections and Political Subdivisions Committee before journeying to the floors of the Senate and the House.

The final redistricting plan was not universally loved by legislators and more than a few expressed reservations with it. But it was far better than the alternative of not finishing a plan at all, said Sen. Charles Scott, R-Casper.

“This plan is not necessarily what I want,” Scott said. “It does increase the size [of the Legislature] and I don’t like that … but it will work. It will enable us to do our duty. I think if we allow the courts to do it for us, we will find they don’t have the resources for the kind of public outreach we have. They don’t operate that way. I think this plan, with all its faults, will be better than anything we’ll get if it’s done by the courts.”

The approved plan expands the Legislature’s size to 62 representatives and 31 senators. The body currently has 60 representatives and 30 senators. The plan was chosen because it fixed many problem areas that were outside the required deviation in the 60-30 plan, said Sen. Bill Landen, R-Casper. For example, it helped resolve concerns in the Big Horn Basin, which was at risk of losing representation after the 2020 Census found the region’s population had dropped.

During the redistricting process, lawmakers ensure each district remains substantially equal to any other with a goal of plus or minus 5% deviation in size.

The map approved by the Legislature Friday night had all but four House districts and two Senate districts within deviation, Landen said. All six of those out-of-compliance districts were in Sheridan and Johnson counties.

“You’ll remember that both [the Senate and the House] brought up the communities of Arvada and Clearmont in Sheridan County,” Landen said. “We felt like … that community deserves to be a part of Sheridan County as opposed to being drawn into Campbell County. That is what puts this plan slightly out of deviation.”

According to a redistricting map from the Legislative Service Office, deviations in the four Sheridan County House districts range from 5.42% in House District 30, represented by Rep. Mark Jennings, R-Sheridan, to 6.26% in House District 40. In the Senate districts, the highest deviation is 5.86%

The consequences of being out of deviation could be severe, Scott said.

Any time a district is outside deviation, the state can be found in violation of the 14th Amendment — the Equal Protection Clause — and is at risk for potential lawsuits and litigation from underrepresented constituents.

As such, the final version of the redistricting bill includes findings designed to offer some protection for the state in the case of potential litigation.

Despite this, more than one legislator expressed concern with the Sheridan County districts being out of deviation.

“… We had a fully compliant map after committee of the whole in this chamber that would have satisfied the needs of the House. We had the opportunity to present that,” Sen. Chris Rothfuss, D-Laramie, said. “Instead, we basically ran out of time. … At the end of the day, it isn’t up to the standards and obligations of what we were supposed to be putting forward.”

Sens. Ogden Driskill, R-Devils Tower, and Tara Nethercott, R-Cheyenne, spent months in the corporations committee developing a redistricting plan, and during that time they focused on ensuring all districts were within deviation. They both voted against the plan that came to the Senate floor Friday night.

“When I found out it was out of deviation … it makes you feel really good about all the time we spent, doesn’t it?” Driskill said to Nethercott after the bill was approved in the Senate.

In contrast, Rep. Dan Zwonitzer, R-Cheyenne, who also served on the corporations committee, voted for the bill when it came to the House.

“Am I happy where it ended up? Not really,” Zwonitzer said. “But I think we got to a place where it’s going to work for the next 10 years, and I would appreciate your support on it.”

All Sheridan County legislators, with the exception of Jennings, voted in support of the plan.

“We were able to come to a middle ground …,” Rep. Cyrus Western, R-Big Horn, said. “It’s not pretty, but it ultimately meets the needs and concerns that we have in our part of the world.”

All of Park County’s lawmakers supported the final redistricting bill outside of Sen. Tim French, R-Powell, who voted no, and Rep. Dan Laursen, R-Powell, who was excused.