For 30 seasons Panther track athletes have been greeted by a familiar face at the finish line: sprints coach Shelley Heny.

Following the conclusion of the 2022 season, Heny decided to retire from … 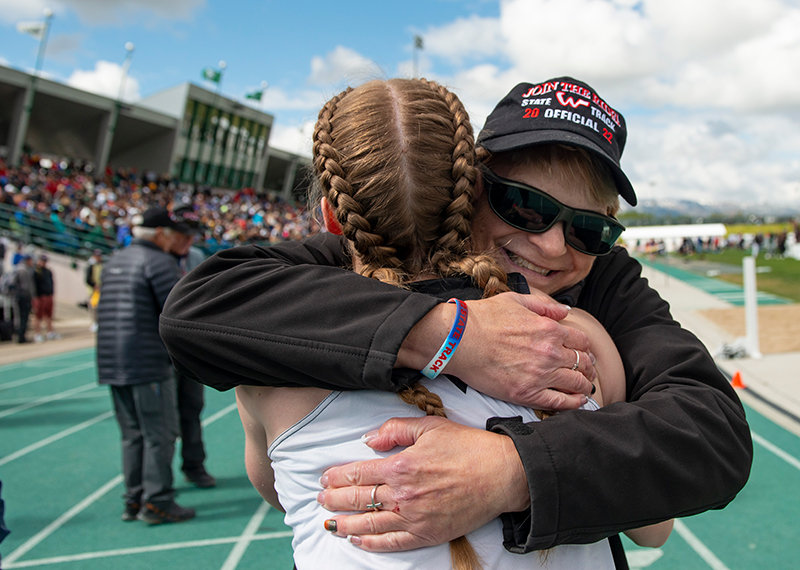 Thirty years of coaching came to an end for PHS sprints coach Shelley Heny, as she hugs Jenna Hillman, who finished her career as the 100 and 200 meter champion in May.
Tribune photo by Mark Davis 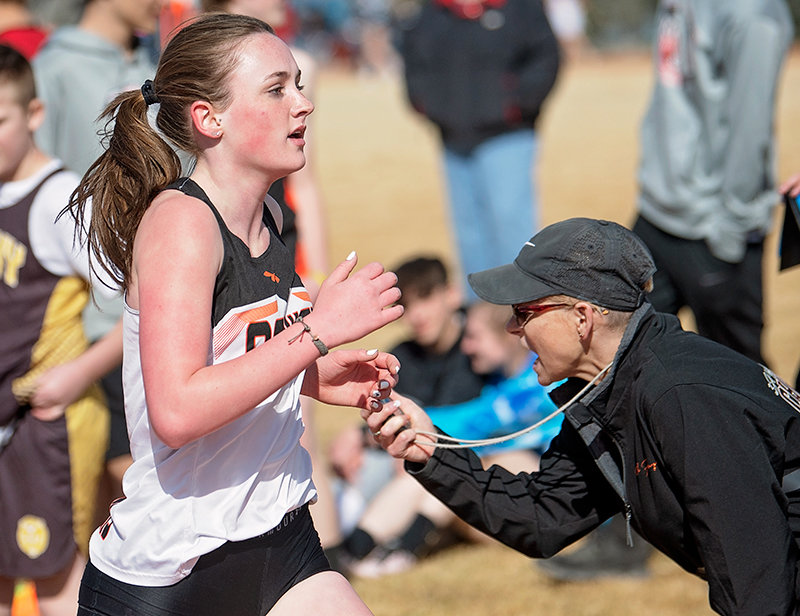 Kinley Cooley runs past Shelley Heny who is yelling out times for distance runners during the opening meet of the season in Burlington in March.
Tribune photo by Carla Wensky
Previous Next
Posted Tuesday, June 21, 2022 8:25 am
By Seth Romsa

For 30 seasons Panther track athletes have been greeted by a familiar face at the finish line: sprints coach Shelley Heny.

Following the conclusion of the 2022 season, Heny decided to retire from her coaching role on the staff at PHS, leaving behind a legacy spanning three decades.

Heny started her own track career in Powell, competing as a sprinter in junior high and high school until her graduation in 1982.

After competing in college and eventually moving back to Powell to teach, Heny was offered the opportunity to take the sprinting coach job under new head coach Scott Smith, who was entering his first year.

Since 1993, Heny and Smith have been a part of nine team titles, with the boys track and field team winning seven titles and the girls winning two consecutive team titles.

“It’s been an amazing last two years for the girls team,” Heny said. “Getting back-to-back was amazing.”

Heny said Hillman told her that winning this year was more exciting than last year, as the Panthers trailed in the team standings heading into the 4x400, but then they blew away the competition in the relay and won by six points overall.

Julia Kay O’Neill was a champion in 2015, walking away with the 400-meter title. Similarly to Cox, Heny helped to coach O’Neill in relays.

The year before O’Neill, KaDee Harrison won the 200-meter dash in dramatic fashion, winning the title by less than 0.05 seconds.

Going back to 2007, Justin Cross and Kenny Smith won the 100- and 200-meter dashes as part of a dominant state title victory for the Panthers.

In addition to individual champions, Heny helped coach 24 relay team wins in both the 4x100 and 4x400.

Over her 30 seasons with the program, Heny has seen a lot of student athletes come through Powell and has seen sprinting times go up and down over that period.

“Sprinting doesn’t change much, I learned and implemented new things over the years to help the kids get stronger,” Heny said. “Times change, kids are getting a little stronger again and times are creeping back down.”

Throughout her tenure Heny said one thing has remained constant, and that is the work ethic and the excitement of the athletes at PHS.

Heny shared the strong work ethic of the tracksters, allowing them the opportunity to continue to grow and celebrate each improvement.

“That’s what I did it for. You do it to celebrate the kids,” Heny said. “It’s amazing to watch the kids that make their mark. It’s the excitement of the younger ones or the not-so-fast ones and how excited they are when they finish the race and find out they are faster than they were last week. That gives me as much joy as Jenna [Hillman] winning the 100 and 200 at state.”

Throughout Heny’s 30 years, the Powell coaching staff has had a consistent group of coaches, as nearly every coach on the staff this past season had more than a decade of experience.

Heny said that being with that coaching staff has been like being with a family for her and she wants to thank them for making her career such a joyful experience.

She feels that the next sprints coach who comes into the program will encounter a group that has a strong work ethic that will aspire to be the best they can be.

Looking back, Heny was thankful for all the kids who came through the program and she hopes she had an impact on each and every one of them.

This is not the end for Heny’s teaching career, as she will remain in her position at PHS as a learning center teacher.

She also said this will not be her final interaction with the PHS track program. She plans to head back out to the track for next year’s home meet — helping time and greet athletes at the finish line as part of the Powell Athletic Roundtable.