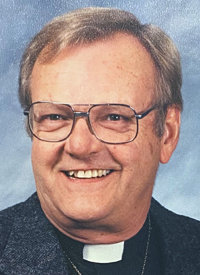 Larry was born in Culver City, California. He moved to Great Falls, Montana, with his mother and sisters in 1960. He graduated from Great Falls High in 1962. He received a B.A. in 1966 from Concordia College in Moorhead, Minnesota, where he majored in English and history, and minored in French. Larry received his Master in Divinity from Luther Seminary in St. Paul, Minnesota, in 1970. He was ordained on Aug. 2, 1970, at his home church, Our Saviours Lutheran Church, in Great Falls, Montana.

His first parish was American Lutheran Church in Winifred, Montana. Larry was then called to a three-point parish where he served Lennep, Martinsdale, Barber and Harlowton, from 1974 to 1984. While in Harlowton he met and married his wife Judy. They were married Feb. 7, 1976.

In 1984 Larry was called to serve Trinity Lutheran Church in Cody, where he continued to serve until his retirement in 2009. After his retirement he served as an interim pastor and pulpit supply pastor in various locations around the synod.

Education was always very important to him. He made annual trips to the seminary for continuing education. He always said you start to die if you don’t continue to grow.

He was preceded in death by his father Orie Vinson and his mother Lois Anderson Vinson. Larry is survived by his wife Judy, two sisters, Linda and Lianne, and many cousins and friends.

Condolences to the family can be sent on Pastor Larry’s page at www.BallardFH.com.