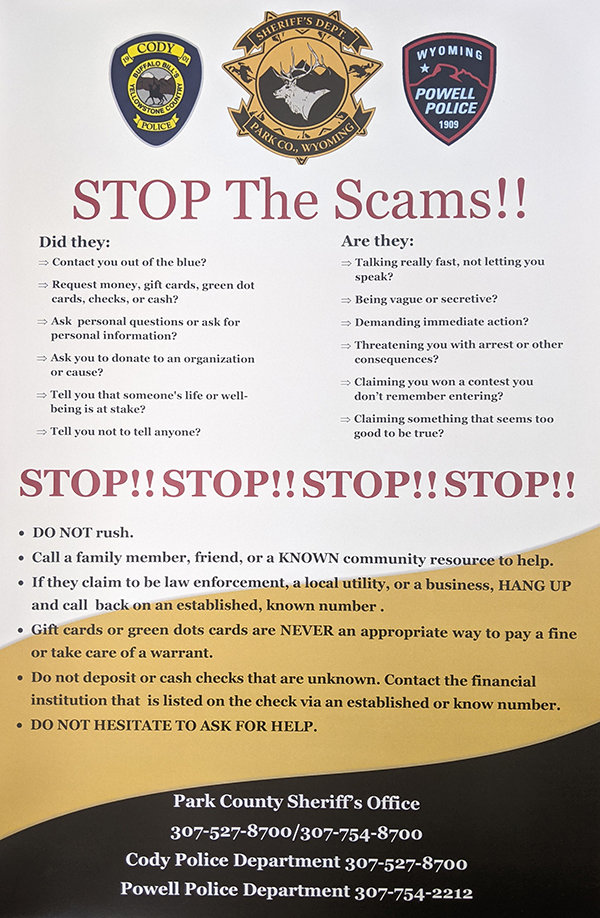 “STOP!! STOP!! STOP!! STOP!!” blare the new posters going up around Park County. The signs are part of an effort to prevent local residents from being scammed by the horde of callers and emailers who try to swindle people out of their money on a daily basis.

One of the poster’s biggest messages is to slow down if you get a suspicious phone call.

Those who fall for and lose money to scams are generally rational people who, in retrospect, will say they knew better, said Charla Baugher-Torczon of the Park County Sheriff’s Office. However, “you get so caught up in the moment,” Torczon said, adding that scammers are “very good, they’re very professional at their trade.”

Scammers will often call with an incredible sense of urgency — talking quickly and talking over their target while threatening an arrest or other dire consequences if the person doesn’t take immediate action. For instance, scammers recently called Powell and Cody residents and claimed they needed to pay up on delinquent utility bills right away or their power would be shut off.

However, as the poster advises, “DO NOT rush.”

“Just stop and give it a thought,” said Torczon.

High-pressure tactics and threats are all warning signs of a scam, as are any calls that are vague or secretive or claim that someone’s life is at stake, the poster says. And generally beware of any contacts that come from out of the blue and request money — including any form of gift card — donations or personal information.

Also watch for callers who say you’ve won a contest you never entered or announce something else that sounds too good to be true, the poster says. In those cases, there’s always a catch that will lead to losing money; for example, a common scam is to send someone a bogus check and demand they send some of the money back in the form of a gift card … then the check bounces and the person is out the cash they passed along to the scammer. The poster warns against depositing or cashing checks from unknown sources.

The signs — endorsed by the sheriff’s office, Powell Police Department and Cody Police Department — also advise residents to not hesitate in asking family members, friends or others for help or more information. If a caller claims to be from a law enforcement agency, a local utility or a particular business and says something that doesn’t sound right, “HANG UP and call back on an established, known number,” the poster advises.

Torczon said the signs are being posted at senior centers, hospitals and other locations around the community. She said law enforcement does a good job of getting the word out online about the latest tricks. However, “whenever these scam waves come in, we’re missing an entire demographic — the people that aren’t on social media,” Torczon said, adding, “We wanted to do something that was more accessible.”

She hopes to update and replace the posters multiple times a year, so they continue to grab people’s attention.