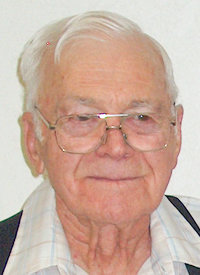 Kenneth Wayne Baker — father, husband, grandfather and great-grandfather — passed from this life while in the nursing home in Powell on Oct. 9, 2021. He was surrounded by family. Ken was 92 years old.

He was born on March 21, 1929, in St. Joseph, Missouri, and was the oldest of 11 children. His parents were Wayne D. and Anna Mary (Hutton) Baker. In 1941, Ken’s parents moved their family from Missouri to Powell. Ken held a younger sibling on his lap the entire trip. He graduated from Powell High School in 1947.

Ken married Marian Elouise Williams on June 12, 1949. They celebrated 72 years together. They met at church and Ken was a Christian all of his adult life. He enjoyed occasionally preaching a sermon from God’s word and was a member of the Church of Christ. Ken served as an elder for many years.

Ken and Elouise farmed for many years, first east of Powell, then on Heart Mountain and finally north of Powell. In 2001 they moved off the farm to their home in Powell. Ken started farming with his father and continued farming until his retirement in 2001. On the farm they raised five children, his best crop was his children.

Ken owned and drove a school bus route picking up students north and west of Powell for about 10 years. He loved hunting and fishing, especially teaching his children to also hunt and fish. He was an excellent shot with either a rifle or shotgun.

Ken served on a number of boards: REA, Garland Light and Power (president), Farm Bureau, and Tri-State. He was also known for his mechanical ability.

Ken is survived by his wife, Elouise, and children: K. David (Tomi), of Powell, Stephen (Sandi) of Fort Collins, Colorado, Micheal (Phyllis) of Thermopolis, Lila Zwemer of Lander, and Timothy of Hutchinson, Kansas. He is also survived by 11 grandchildren and 22 great-grandchildren. Surviving siblings are Ima Jean Johnson, of Pittsfield, Illinois, Lowell of Cody, Wilma (Jerry) Benson of Lawrenceburg, Indiana, Max (Nancy), Harvey, Marjorie (Mike) Parker and Dorthy, Kister all of Powell. Sisters Alice Buhler and Mary Lou McCown, and brother Coy all preceded him in death.