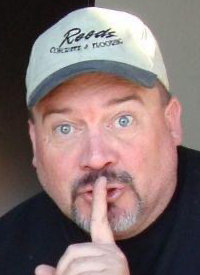 Vernon “Kelly” Wintermote, formerly of Powell, passed away at his home in San Diego, California, on March 4, 2022. Kelly was born to Varnard “Red” Wintermote and Judith Bovee, in Portsmouth, New Hampshire on Jan. 14, 1962. The family moved to Powell in 1975. Kelly graduated from Powell High School in 1980 and later took acting and drama at Northwest College.

After college, Kelly moved to Los Angeles to pursue his dreams of being on the big screen. Kelly had roles in such movies as Once Bitten, Teen Wolf 2, Buckaroo Bonzi, and various music videos back in the MTV days. Kelly later went to work for OCB Reprographics, where he worked for over 30 years both in Los Angeles and San Diego.

Kelly was preceded in death by his parents Varnard “Red” Wintermote and Judith Bovee, his stepdad Carrol Bovee, and we cannot forget his beloved and faithful companion of many years, Yoshi.

Kelly will always be remembered for his positive attitude, always with a story or joke, contagious laugh, and sense of humor!

A celebration of life is being planned for a later date.