Powell, WY
Partly Cloudy, 75° F
The Root of it All

Cattle producers should keep a diligent eye on forages that could accumulate too many nitrates and become toxic.
File photo courtesy CGP Grey, www.CGPGrey.com 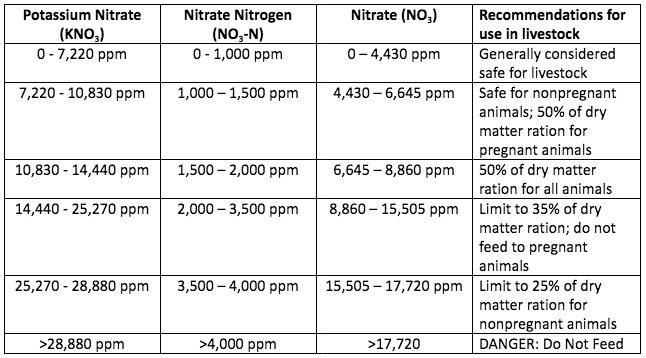 This table lists recommendations for laboratory results of forages in parts per million.
Courtesy image 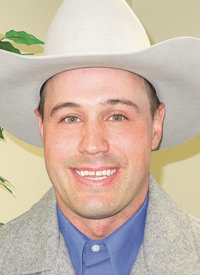 As cattle transition from rangelands into croplands or feed yards, be aware of nitrate toxicity. Although nitrate toxicity is nothing new, it is still necessary to keep a diligent eye on forages that are at risk of nitrate accumulation and watch for symptoms of nitrate poisoning in livestock, particularly cattle. Especially if you are sourcing cereal hays or grazing regrowth in grain crops.

Known as “oat hay poisoning” since the 1930s, nitrate toxicity is the excessive consumption of nitrates by livestock, which can result in death. It’s related to the lack of oxygen in the blood.

Acute toxicity usually occurs within a half hour to four hours after consuming toxic levels and the onset of symptoms is rapid.

The typical culprit for nitrate toxicity is cereal grains (oat, Sudan grass, rye, wheat, barley, triticale, spelt, etc.) that are baled or grazed. However, toxicity has been reported in other crops such as bromegrass, orchardgrass, fescues, sorghum, millet, corn, sweet clover and alfalfa. Specific weed species can also be of concern; these include kochia, lambsquarter, pigweed, quackgrass and Russian thistle.

So why do these plants accumulate nitrates? The uptake of nitrates from the soil is a normal and natural process for plants to obtain the nitrogen requirements needed for growth and development during the growing season. Nitrate accumulation occurs when roots accumulate nitrate faster than the plant can convert it into protein. This typically is correlated with a stage of plant growth and/or enhanced by specific conditions, most commonly climatic conditions.

The highest levels of nitrate are found in the lower third of the stem and in vegetative growth stages. Under normal conditions, nitrate levels are consumed as the plant matures further into grain development. As for specific conditions, the most common event is drought. However, frost periods, unseasonably cool weather patterns, hail, shade, disease and insect pressures, herbicide damage and grazing during the growing season can also stress the plant into accumulating more nitrates.

Conditions to be aware of, especially with cereal grains, would be crops (including grass pastures and hay) grown on soils with high manure applications, high nitrogen fertilizer applications or under stressed conditions like drought. Unfortunately, nitrate toxicity is so unpredictable that it can even occur in normal growing conditions.

• Test cereal grain forages or other suspected forages prior to feeding or grazing.

• Do not allow hungry cattle to eat high-nitrate forages.

• Observe cattle frequently for signs of toxicity when you turn them out in pastures or on feed that could be suspect.

• Don’t graze high nitrate pastures after a killing frost, until a week afterwards.

• Cattle in poor health and condition, especially with respiratory diseases, are more susceptible.

• Give livestock access to fresh nitrate-free water at all times.

• Dilute high nitrate forages with low nitrate feeds and forages. High-energy feeds are best because they stimulate the conversion of nitrate into the non-toxic forms.

• Graze cattle on high-nitrate pastures during the day and remove them at night for the first week of grazing if possible. This helps acclimate cattle to the higher nitrate levels.

So what can be done with forages that have high nitrate levels or are suspected? Ensiling forages is the safest and most effective way to manage high nitrate levels. During the fermentation process of silage, the microbial activity consumes the nitrates resulting in 10-60% lower levels.

Another option would be delaying the harvest of the forages to later maturity stages — for example, from flowering to soft dough stage. One questionable option is raising a cutter bar to only harvest the top two thirds of the hay. For forages that have experienced environmental events, such as cool weather, hail, pest pressures, drought, etc., always test for nitrate levels prior to grazing or haying.

As hay is purchased this fall and winter, do not be afraid to request a forage analysis for nitrate toxicity especially on cereal grain forages. Also, as plans are being made for next year’s forage crops and grazing rotations, keep in mind nitrate toxicity and ways to minimize your risk.  For more information on nitrate toxicity symptoms in livestock and for treatment, please contact your local extension office.

(Jeremiah Vardiman is an agriculture and horticulture extension educator for the University of Wyoming Extension. He is based in Powell and can be reached at jvardima@uwyo.edu or 307-754-8836.)