The Biden administration’s COVID-19 vaccine mandates have had health care workers and their employers on edge in recent weeks, but on Monday, a  U.S. District Court judge temporarily … 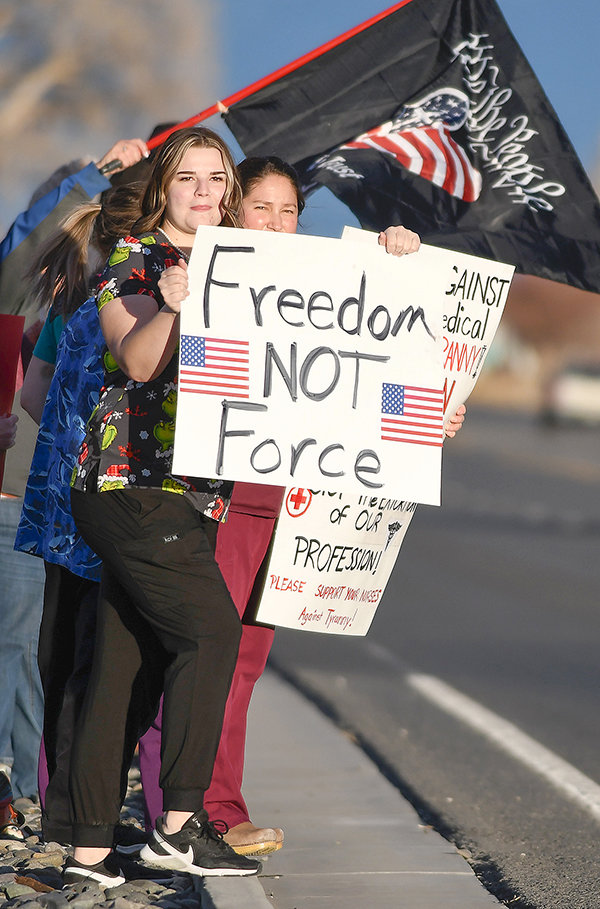 The Biden administration’s COVID-19 vaccine mandates have had health care workers and their employers on edge in recent weeks, but on Monday, a  U.S. District Court judge temporarily halted the enforcement of the mandate in Wyoming and nine other states.

The preliminary injuction follows a suit filed on Nov. 10 by a coalition of 10 state attorney generals — including Wyoming’s Bridget Hill — which challenged the authority of the Centers for Medicare and Medicaid Services (CMS) to enforce the rules.

“Because it is evident CMS significantly understates the burden that its mandate would impose on the ability of health care facilities to provide proper care, and thus, save lives, the public has an interest in maintaining the ‘status quo’ while the merits of the case are determined,” wrote U.S. District Judge Matthew Schelp of the Eastern District of Missouri.

The Centers for Medicare & Medicaid Services (CMS) announced in November that employees of health care providers would be required to have their first COVID vaccination shot by Dec. 5, and be fully vaccinated by Jan. 4 in order for the providers to continue receiving Medicare and Medicaid funding.

The federal funding accounts for up to 70% of revenues at Powell Valley Healthcare and Cody Regional Health. Without that money, the providers couldn’t stay open. So, employees were informed this month they would need to be vaccinated by the deadline or lose their jobs.

The hospitals were already faced with staffing shortages, and the mandate threatened to thin their ranks even further.

Earlier this month, healthcare workers protested in Cody, across from Cody Regional Health, and another protest was held Sunday along Powell’s Coulter Avenue.

About an hour into the Powell protest, there were a couple dozen protesters with signs and flags, drawing honks from passing motorists.

“We don’t believe that the government should be able to make a mandate that we have to take an injection or any kind of medication, ingest anything into our bodies, or not be able to earn a living,” said Leah Hansen, a registered nurse at Powell Valley Hospital and the organizer of the protest.

Hansen, who spoke before the injunction was issued, said that the protest was not against the vaccine but against the mandate.

She pointed out that patients can refuse any treatment, and she believes healthcare workers should have the same right.

Tegan Lovelady, a CNA at the Powell Valley Care Center, said she was concerned that many people in health care would lose their jobs and that the mandate would set a precedent that could extend to other industries.

“It’s our families, it’s our community, and we’re being affected,” Lovelady said. “If people don’t stand up now, it’s going to be them next.”

Powell Valley Healthcare (PVHC) has been assisting employees who request an exemption to the vaccines. At the PVHC Board of Directors’ Nov. 22 meeting, CEO Terry Odom said the organization had helped 75 employees obtain exemptions and that about half the hospital’s staff was fully vaccinated; that’s up from a figure of roughly 35% in August, which included only about 15% of workers at Powell Valley Care Center.

“As you know the COVID vaccine mandate has been very difficult for all,” Tinsley said.

PVHC’s budget took a hit this year from all the overtime the organization has been paying out. CFO Joy Coulston said part of the increased expense is due to increased volume, which stems from COVID cases, but employees taking up extra shifts to cover staffing shortages has contributed to the ballooning cost.

From July 1 through the end of October, the hospital had spent $4.09 million on salary, benefits and contract labor, which was nearly $950,000 over budget. Contract labor added $123,000 to the expenses, which wasn’t budgeted.

The hospital has been utilizing travelers, which are nurses who are shipped in to help with the shortages. PVHC had 11 travelers as of last week, which Odom said was good; it can take up to 60 days to recruit them.

The hospital is also dealing with increased turnover rates due to what Odom called “external factors.”

The overall turnover rate at PVHC rose by more than 1% from July through October, hitting nearly 20%. For clinical positions, turnover has gone from 16.56% in July to 21.43% in October. Odom suggested that, despite all efforts to address the issues, the trend might continue.

At a Nov. 12 meeting of the Wyoming Legislature’s Joint Labor, Health & Social Services Committee, officials representing the state’s hospitals and nurses said the mandate was a concern and would likely lead to additional departures, but they said burnout and pay have been the primary drivers of the recent high turnover in the industry.

“Nurses were leaving before the vaccines came out,” said Toni Decklever of the Wyoming Nurses Association, “because we’re just tired.”

Monday’s injunction should, at the very least, buy PVHC some time.

Gov. Gordon, who had Wyoming join the lawsuit over the mandate for health care workers, cheered the injunction in a Monday statement.

“This is welcome news for Wyoming’s rural health care facilities, which are already facing staffing challenges without additional unconstitutional burdens being placed on their employees by the federal government,” Gov. Gordon said. “Health care employees should not be forced to choose between vaccination and termination.”

As of Monday, roughly 42% of Wyoming’s overall population was fully vaccinated against COVID-19, including 41.6% of Park County residents. Public health officials say getting vaccinated is the best way to prevent serious illness from the novel coronavirus.