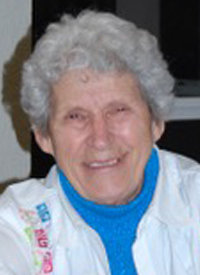 Joyce La Rae Jones died peacefully at the Cody Long Term Care Center, on March 10, 2022, at the age of 88. She will be dearly missed by her family and friends.

She was born Nov. 18, 1933, in Caney, Kansas, to Jack and Clara (Tine) Cassity. Her family moved to Rangely, Colorado, then to Riverton, Wyoming, where she graduated from high school.

She married Roger “Tex” Roberson and resettled in Powell, in 1956, where they had six children: Joe, Vanita, Jim, Dave, Carole Lee and Susan. She was remarried in 1970 to Everett Jones of Big Timber, Montana. They moved to Meeteetse in 1973 with Everett’s son Roy. They had two more children, John Paul and Karen. They lived the rest of their lives in Meeteetse where Joyce and Everett raised their family and became a fabric of community.

Joyce warmed the hearts of those around her. She was always quick to laugh and had a way of putting everyone around her at ease. She was an active member of St. Andrews Episcopal Church. She was a fantastic cook and an avid gardener. She loved fishing and camping in the mountains of Park County. Her favorite pastime was yelling bingo any time she could. She loved bringing people together for big family dinners and she never knew a stranger.

She was preceded in death by her parents, Jack and Clara Cassity; her sister Ann Dunn; her husband Everett Jones; and her children, Jim and Carol Lee Roberson.

She is survived by her brothers, Jim and Gary Cassity of Riverton; and her children, Joe Roberson, Vanita (Jeff) Paulson, David (Beth) Roberson, Susan Roberson, John (Crystal) Jones, Roy (Yeun) Jones, and Karen (Cole) Spangle; as well as 21 grandchildren, 14 great-grandchildren, and one great-great-grandson.

Memorial services will be announced at a later date. Memories and condolences can be left on Joyce’s memorial page at www.BallardFH.com