In visits to Powell and elsewhere, Eagles leader looks to inspire members

Across its more than century-long existence, the Fraternal Order of Eagles has helped found Mother’s Day, pushed for the creation of Social Security, distributed monoliths of the Ten …

In visits to Powell and elsewhere, Eagles leader looks to inspire members 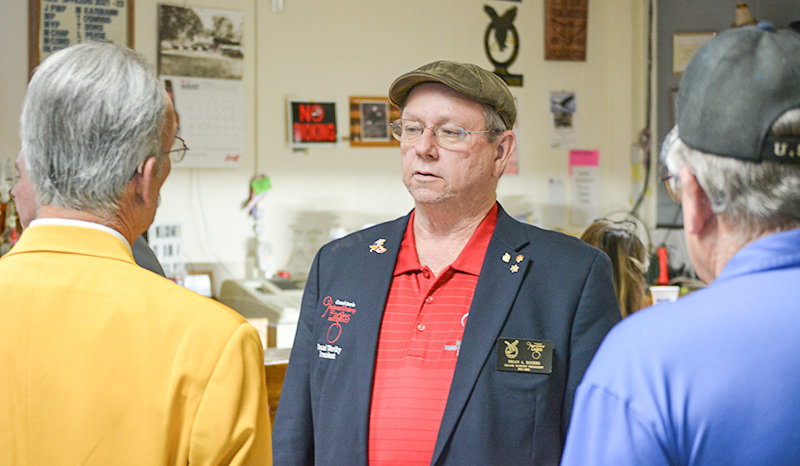 Fraternal Order of the Eagles Grand Worthy President Brian Rogers of Phoenix visits the Powell Eagles Aerie and Auxiliary No. 2426 as part of a tour across the West to draw in more members, improve facilities and generate fundraising ideas.
Tribune photo by CJ Baker
Posted Tuesday, September 7, 2021 8:15 am
By CJ Baker

Across its more than century-long existence, the Fraternal Order of Eagles has helped found Mother’s Day, pushed for the creation of Social Security, distributed monoliths of the Ten Commandments across the U.S. and Canada and raised $25 million to create a diabetes research center in Iowa.

And yet, FOE Grand Worthy President Brian Rogers of Phoenix often hears that his organization is “the best kept secret.” But Rogers is working to change that.

He visited Powell Eagles Aerie and Auxiliary No. 2426 last week as part of a tour across the West, working to help motivate the organization’s members to draw in more members, improve facilities and generate ideas for fundraising.

Rogers, who became the organization’s leader earlier this month, intends to visit 175 lodges in a span of 10 months. Before stopping in Powell on Aug. 26, he’d made visits in Washington, Oregon, Idaho and Montana, and he went on to Sheridan, Casper and Cheyenne — then headed to Virginia Beach ahead of an upcoming trip to Spokane, Washington.

While ambitious, that’s only a fraction of the more than 1,400 aeries and auxiliaries located around the U.S. and Canada. As for how Rogers chose the stops on his recent trip, the 45-year member said he specifically picked aeries that have gone without high-level visits for years.

“We may or may not know if they’re all right: Are they still functioning? Are they hurt terribly bad?” Rogers explained. “So it’s really it’s kind of a way of going around and checking the health of the organization to make sure everybody’s going to be all right … as much as I can.”

Overall, he said the organization is on an upward trajectory. Prior to the arrival of COVID-19, its membership rolls had been growing. The pandemic hurt the FOE, Rogers said, but not as much as the organization had feared.

In fact, “we’re on track to overcome that [drop] right now,” he said, averaging 400 new or returning members every day.

In many places, COVID-19 forced aeries and auxiliaries to change what they were doing, such as by serving meals outside; in some cases, he said that helped attract new members.

“These were the kind of things that got us out of the building and into the parking lot, where people saw who we were,” Rogers said.

After being invited by an existing member, anyone can join and enjoy the benefits of the organization, which include a social gathering spot (the Powell lodge features a bar and kitchen), various discounts and an opportunity to participate in charitable fundraisers and other events. As an example, the Powell lodge is hosting a car show during Homesteader Days.

Local aeries and auxiliaries support a variety of causes — for instance, those in Wyoming recently made donations to senior centers across the state, including in Powell — while the FOE supports charities that include kidney, heart, diabetes, cancer and spinal cord injury funds, a children’s fund, a memorial foundation and the Golden Eagle Fund. The Memorial Foundation is a kind of insurance offered to FOE members. If a member dies on the job, the foundation will cover their children’s medical and dental insurance and provide funds for their education, through a college degree.

Rogers has been raising funds for Alice Cooper’s Solid Rock foundation, a faith-based organization that provides after-school programming to teens that are focused around music, dance, video and sound production; the Powell aerie and auxiliary made a donation to the nonprofit during Rogers’ visit.

The grand worthy president is hoping his visits help inspire more FOE members to get involved.

“We have a lot of members who maybe sit at the bar and drink and don’t really get involved,” Rogers said. “And so my motto is to, ‘Get off the bench and get in the game’ —  to try and get the members that we’ve been signing up the last couple of years up and participating in fundraisers or charity events and stuff like that, or even stepping up and being officers.”

He also encourages aeries and auxiliaries to bring in new people, to ensure the local groups are not going stagnant and aging out. The average age of an FOE member is 55 to 60 years old, Rogers said, and that’s about five years younger than it used to be, but they hope to attract more people in the 45-50 range and younger folks in the 20-25 range. Rogers also encourages local leaders to find and train their replacements to keep the organization going.

“It’s a hard road. It’s hard work; we tell people that all the time,” Rogers said, but, he added, “the more people that accept the commitment, the easier it is to keep it moving.”

There are roughly 5,000 FOE members in Wyoming, spread across 13 aeries and auxiliaries. The Powell lodge is located at 131 N. Clark St.