JACKSON (WNE) — After a two-month investigation, Yellowstone National Park rangers believe they have identified the woman who approached and photographed a mother grizzly bear and her cubs … 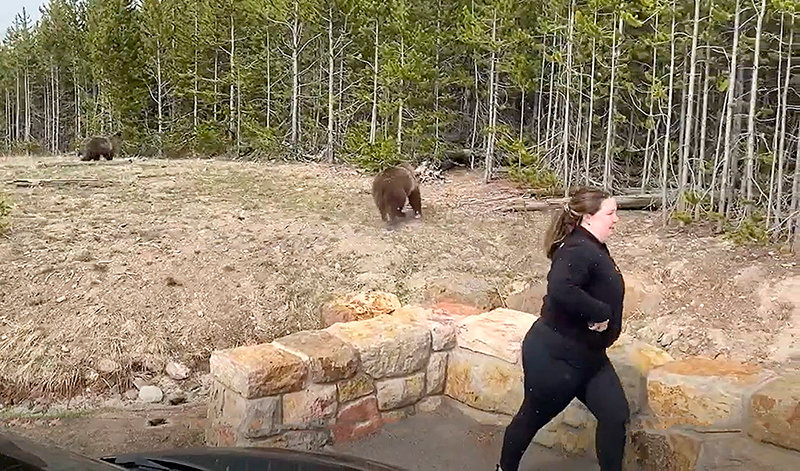 Officials in Yellowstone National Park turned to social media to ask for help in identifying this woman, who was captured on video getting dangerously too close to grizzly bears in May. She has now been charged.
Photo courtesy Darcie Addington via the National Park Service
Posted Tuesday, August 3, 2021 8:15 am

JACKSON (WNE) — After a two-month investigation, Yellowstone National Park rangers believe they have identified the woman who approached and photographed a mother grizzly bear and her cubs during a May 10 incident that ignited social media discourse.

The Carol Stream, Illinois, native had just driven into the park with her family. At Roaring Mountain, three grizzly bears were grazing, and a small crowd of tourists gathered to watch.

Some of those visitors later told park rangers that they advised her to back up, but she ignored them.

As the woman stood just 10 yards from the mother grizzly, snapping photos with her smartphone, the sow made a bluff charge, and one of her cubs scampered into the woods. Investigators determined that the bear came within 15 feet of the woman, who quickly dropped the phone to her side and walked away.

Another visitor filmed the entire encounter from the sunroof of her car, and posted it to Instagram the same day with the caption, “Absolutely INSANE.” The video quickly went viral, with calls to find the woman and permanently ban her from the park. Within days, a park ranger was assigned to investigate.

Two weeks after the incident, the National Park Service posted a screenshot from the video and asked the public for help identifying the woman. According to court documents, “numerous tips were received,” which allowed investigators to track down the suspect through her father’s Facebook account.

The Illinois woman was charged July 20 in the U.S. District Court in Yellowstone with two related counts of disturbing wildlife. She is set to appear in court Aug. 26 at 9 a.m. in Mammoth.