The season-opening East/West Classic in Buffalo was a learning experience for a young Panther basketball team. The Powell High School boys beat Class 2A Big Horn, but dropped close contests to 3A … 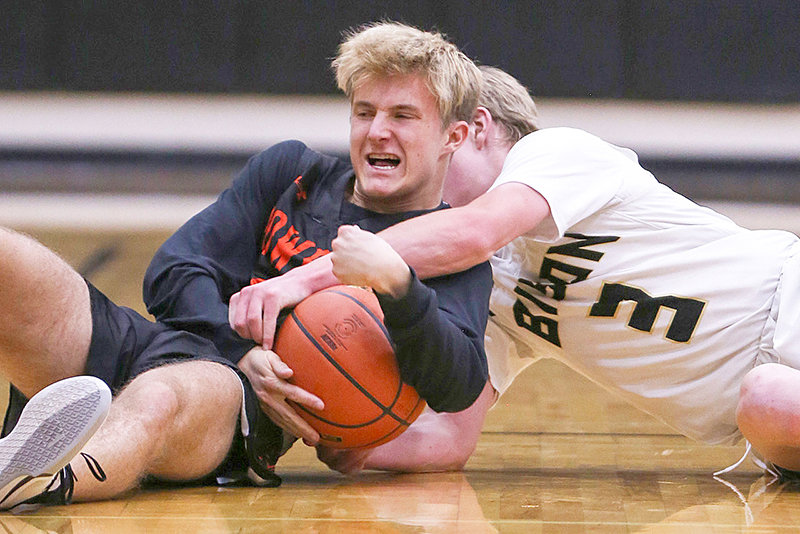 Senior Keaton Rowton fights for a loose ball during the Panthers’ Friday loss against Buffalo. The Panthers finished the weekend 1-2 and have a matchup with Cody this week.
Photo courtesy Jessi Dodge, Buffalo Bulletin
Posted Tuesday, December 14, 2021 8:00 am
By Seth Romsa

The season-opening East/West Classic in Buffalo was a learning experience for a young Panther basketball team. The Powell High School boys beat Class 2A Big Horn, but dropped close contests to 3A Buffalo and Rawlins to come home with a 1-2 record.

“We really feel good about how we played this weekend despite only winning one game,” said Powell High School head coach Mike Heny. “We had chances to beat both Buffalo and Rawlins and that experience this early in the season will pay dividends as we get more confident and learn how to close out games.”

The first game of the tournament was a good one for the Panthers as they came out Friday and led wire-to-wire against Big Horn (1-2).

Despite being a young team with seven rostered sophomores, it was seniors Toran Graham and Zach Ratcliff who got the scoring going, with a layup and a 3-pointer in the opening minutes. Ratcliff had the hot hand for the Panthers, scoring 14 of their 16 points in the first quarter, as PHS led 16-10 after one.

Ratcliff went to the bench with two fouls in the second quarter, but quick transition and press breaking allowed Powell to keep Big Horn at bay.

The Panthers extended their lead to double digits, 29-19, off a Graham layup and went up 29-23 at halftime.

The Panthers came out firing in the third quarter, grabbing a 40-26 advantage by the end of the period. By early in the fourth quarter PHS had forced 21 turnovers, which was instrumental in helping Powell seize control.

Powell led 49-29 midway through the final period as Ratcliff — who finished with 21 points — continued his scoring spree. The Panthers walked away with a 58-38 win.

“It was good for us to play well in that first game,” coach Heny said. “With young teams, it can sometimes be difficult to make in game adjustments but I thought our kids did a great job.”

The Panthers got around six hours of rest before taking on East/West Classic hosts Buffalo (4-0).

The Bison took an early 7-2 advantage, but a Ratcliff 3-pointer and layup helped key a Panther run that put PHS up 10-7.

The close contest continued through the second quarter, as the teams finished the half with baskets at each end for a 27-all tie.

In the third period, the teams stayed close until Buffalo hit a barrage of 3-pointers on three straight possessions. The Bison closed out the quarter on an 18-8 run to take a 50-40 lead.

“We got a little lazy off the ball which allowed them to get free on the perimeter in the last half of the third quarter,” Heny said.

PHS pulled within one possession, at 56-53, on a Brock Johnson free throw with 1:49 remaining. However, Buffalo outlasted the Panthers in the free throw game,winning 62-55.

Following the close loss the night prior, the Panthers had a little time to regroup before facing preseason No. 3 ranked Rawlins (3-0) on Saturday.

The game started out at a fast pace, as the Outlaws brought a full-court press to try and force the Panthers into turnovers.

Powell was able to figure out the defense early, with the two teams tied at 6-6 after two minutes. A forced turnover by Graham capped a 6-0 Panther run over the next two minutes, but a subsequent 6-0 run by the Outlaws tied the game at 12. Rawlins led 17-15 after one.

After their hot first quarters, the teams combined for just 12 points in the second period, as the Panthers took a 23-21 advantage to halftime.

Rawlins grabbed a 30-25 lead in the third quarter, but Graham soon tied the game with a putback. Senior Jay Washington later hit a buzzer beating layup to give the Panthers a 39-36 lead at the end of the period.

PHS still led by three late in the closing minutes, 45-42, but Rawlins made a free throw to cut the lead to two. Coming out of a timeout, the Panthers missed an open layup and the Outlaws tied things at 45 with 30 seconds left.

Powell had an opportunity to win but turned the ball over after a side-out play, then Rawlins missed a 3-point try to send the two teams to overtime.

Offensive fouls and turnovers had the teams still tied at 45 halfway through the extra session. But the Outlaws took the lead on a free throw and then worked the clock below 30 seconds, forcing the Panthers to foul. Three Outlaw free throws made it 49-45, and a consolation 3-pointer by Johnson made the final score 49-48.

The Panthers were without two starters on Saturday, as Ratcliff, their leading scorer for the first two games, was taking the ACT and fellow senior Keaton Rowton was ill. Sophomore Gunnar Erickson, expected to be a rotational piece for the Panthers, was also absent from the lineup due to an injured hand which is expected to sideline him until after winter break.

Coach Heny said he felt there were a lot of positives the team can take from the first weekend and a number of simple fixes that they can make going forward.

The Panthers will have one more game before Christmas, as they will host rival Cody on Friday at 7 p.m.