Josh Pomeroy, arborist with Blue Ribbon Tree Service, is trying to prevent a tree problem coming for Powell. Much of the town’s urban forest was planted as much as a century ago, meaning a … 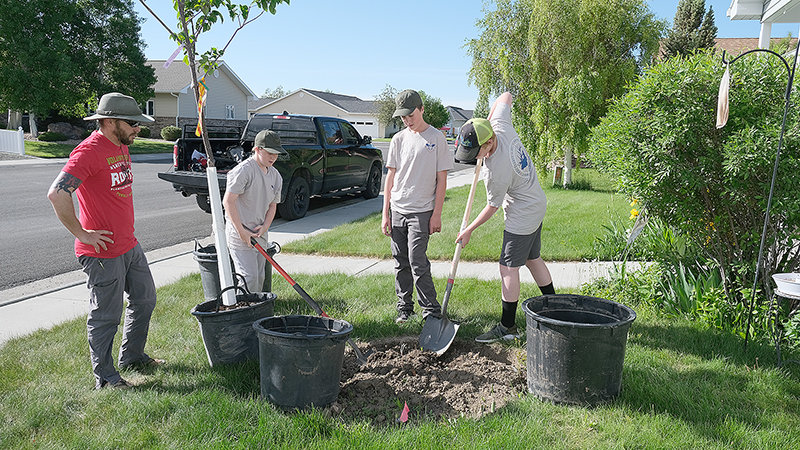 Josh Pomeroy, arborist with Blue Ribbon Tree Service, is trying to prevent a tree problem coming for Powell. Much of the town’s urban forest was planted as much as a century ago, meaning a large portion of that forest is reaching the end of its life span.

“Trees don’t live forever. We’ll be the first generation in Park County who will see the end of the homesteader trees,” Pomeroy said.

Three years ago, Pomeroy established the Homesteader Roots program. Using donations from private citizens and local businesses, the program plants trees at Powell residents’ homes for a $50 cost share with the homeowner in hopes of working proactively to preserve and grow Powell’s urban forest.

They start planting every June. On Saturday, Pomeroy and a dozen volunteers from Powell, including members of the Boy Scout Troop 26, planted an ivory silk lilac in Gretchen Beerline’s yard. Beerline had a “beautiful” crabapple tree, but it got hit with frost damage. That left it vulnerable to disease, and she finally had to remove it.

“I was heartbroken,” Beerline said.

The tree Pomeroy and the Boy Scouts pla-nted will grow about 20 to 30 feet tall. It’s deci-duous, meaning it sheds its leaves every year. It produces a rich green foliage and blooms in June for about two weeks with white flowers that produce a fragrance through the summer.

Lately, stocks of the tree have been sparse.

“Josh [Pomeroy] did some Josh magic and helped me get one,” Beerline said.

She said she tries to attract as many pollinators as possible, and the ivory silk lilac is known to attract beneficial insects, butterflies, and potentially even hummingbirds.

Besides planting more trees, Homesteader Roots aims to expand Powell’s biodiversity. About 60% of Powell’s trees are green ash. Pomeroy said you only want about 33% at most of the town’s urban forest to be a single species. Without more diversity, disease can decimate the forest.

“For example, the emerald ash borer is coming for our ash trees. When your town is 50% to 60% green ash, imagine losing half of the trees in your town after that insect gets here,” Pomeroy explained.

Working with the Boy Scout volunteers, Pomeroy said, also gives the program an opportunity to provide education on the preservation of urban forests and trees in general.

The program initially hoped to plant 25 trees per year, but in the three years of existence, it only had cost shares on 19 trees.

They’re hoping that more people will become aware of the program and avail themselves of it.

The Powell Economic Partnership is the fiscal sponsor of the program.

For more information, to cost-share a tree, or to volunteer or donate to the program, contact PEP at 307-754-3494 or homestaderroots@gmail.com.