Heading into the last weekend of the regular season, the Trapper men’s soccer team had an outside chance to host a playoff game in the first round of the postseason. However, the Northwest … 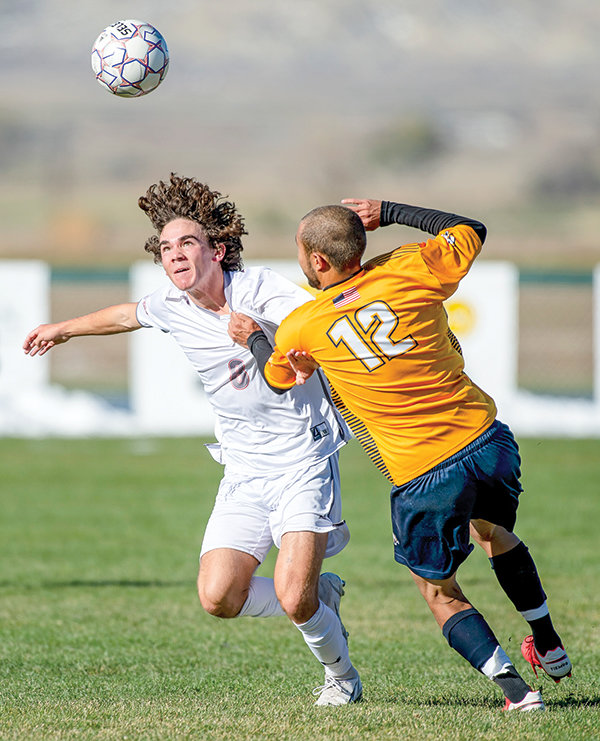 Midfielder Cody Shrum (left) chases after his own header as he attempts to work his way past the Western Nebraska defender. The Trappers would go on to lose 4-2 against Western Nebraska and 2-0 against Northeastern. The Trappers will head to Casper for a playoff game on Saturday.
Tribune photo by Mark Davis
Posted Thursday, October 21, 2021 8:10 am
By Seth Romsa

Heading into the last weekend of the regular season, the Trapper men’s soccer team had an outside chance to host a playoff game in the first round of the postseason. However, the Northwest College team dropped their final two home contests against Western Nebraska 4-2, and Northeastern 2-0.

The troubles began early for the Trappers. A miscommunication between goalkeeper Matias Sandoval and his defense led to an errant pass that saw Rodrigo Cercal give Western Nebraska a 1-0 lead just 14 minutes into the game.

Cercal would not make the situation easier, as a triangle of Cougars built up play on the right wing, worked their way into the box and found a cross to the forward to put the Cougars up 2-0 just one minute later.

The Trappers were able to settle down and begin connecting passes while also sustaining continued pressure from the Cougars for nearly the rest of the first half.

Then, there was another error at the back.

An errant pass led to Cercal intercepting it. He wove his way past two defenders and rifled a shot into the net to complete his first-half hat trick in the 43rd minute, putting the Cougars in control at 3-0.

“It has been individual areas that have been so costly,” Trapper coach Rob Hill said. “I feel like if we did not make so many mistakes we would be in these matches against these teams.”

Heading into the second half, Hill made several adjustments, subbing out Sandoval for Bailey Jordan in net and putting Sonny Bizure up top as the lone striker in the formation.

Early on in the second half the Trappers appeared to be finding connection up top, as they applied pressure to the Cougar defense and appeared to be close to finding the net. Six minutes in, Martin Gonzales-Gutierrez hit a free kick outside the 18-yard box just over the crossbar.

The Trappers scored their first goal of the match soon after. When the Cougar goalkeeper came out to get a ball just outside of the 18 yard box, he ran into his own defender — and Bizure was able to deflect the ball past the defense and tap it into the net to make it 3-1.

“Sonny is able to get in behind with his speed and we played to his strengths,” Hill said.

Shortly after, however, Cercal came back to haunt the Trappers again. While driving up the right wing, he was able to slip a pass in between the Trapper defenders and find Kaleb Gonzales, who slotted the ball past Jordan to put the Cougars up 4-1 midway through the second half.

Bizure added a consolation goal for the Trappers with 10 minutes remaining off a long through ball that he chipped over the keeper. That finished the scoring at 4-2.

The Trappers returned to the field on Saturday to take on Northeastern (6-8-1 overall, 1-4-1 Region IX) for their sophomore day and final match before the postseason.

The Trappers lost to Northeastern earlier in the season in Sterling, Colorado, but NWC was awarded the win after an opposing player was deemed ineligible to play.

The first 30 minutes of the match were back and forth, with Matias Sandoval returning to net for the Trappers and making some key stops to keep Northeastern from the back of the net.

Northeastern broke the deadlock in the 30th minute with a low driven shot from Lars Walczyk just outside the box that found the bottom corner of the net. It put the Plainsmen up 1-0.

With the Trappers failing to generate as much attacking power as they discovered in Friday’s second half, the NWC defense needed to come up with stops to keep the team in the game.

A goal was ruled offside for the Plainsmen in the 62nd minute which, coupled with saves from Sandoval, allowed the Trappers to remain in the game through the second half. However, one minute before full time, the Plainsmen got their second goal to put the game out of reach. They went on to defeat the Trappers 2-0.

NWC now heads into the postseason and the first round of the Region IX tournament. The Trappers will face No. 2 seeded Casper College on Saturday at 2 p.m.

In an earlier October matchup between the two teams in Powell, the Trappers lost 4-1, in a game where Sandoval went down with a dislocated shoulder.

If the NWC men beat the Thunderbirds Friday, they will advance to the semifinals of the Region IX tournament in Denver next weekend.