It makes sense that Jenna Hillman has become an elite sprinter at Powell High School.

She comes from parents who had similar speed. Her father, Jason, was a running back in high school, … 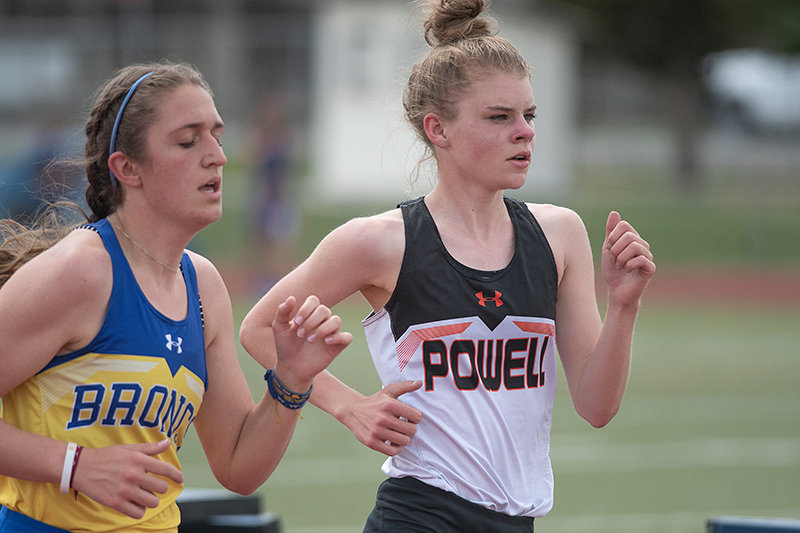 Brynn Hillman competes in the 3200 at the State Farm Trackstravaganza earlier this month. In her first year of track, the freshman has become a staple for PHS.
Tribune photo by Carson Field 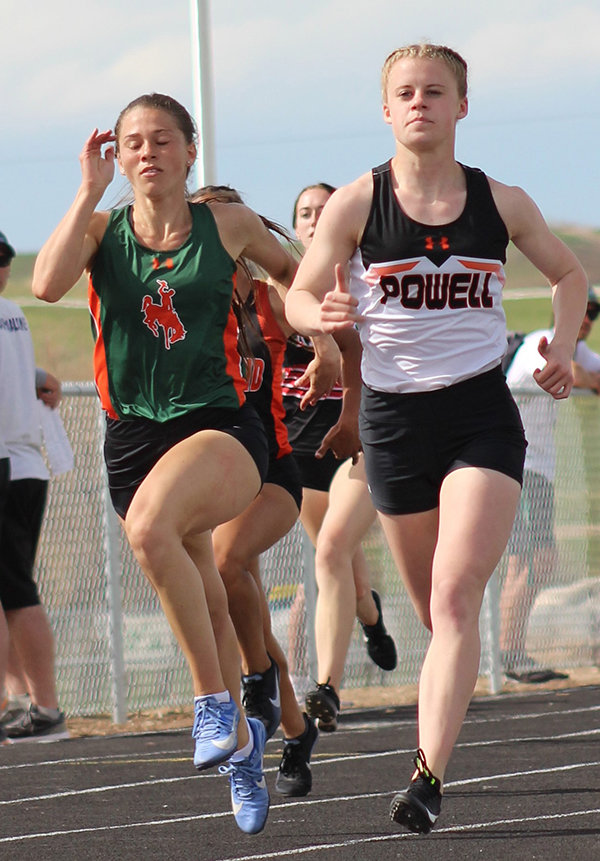 It makes sense that Jenna Hillman has become an elite sprinter at Powell High School.

She comes from parents who had similar speed. Her father, Jason, was a running back in high school, while her mother, Amy, competed in track, basketball and volleyball. A junior, Hillman has prequalified for state in all of her events.

But what’s unordinary is the specialization Jenna’s younger sister, Brynn, has immersed herself in: endurance running.

“I started running during the summer and just really liked it,” Brynn Hillman said.

Growing up, the sisters raced often, along with their cousin, Cade. Jenna always won.

“It made me mad,” Brynn admitted.

These early victories led Jenna to the sport, starting in the seventh grade. By the time Brynn got to that same grade — when middle school track begins — Jenna was a ninth grader and already one of Powell’s best runners.

Jenna attempted to lure her sister to the sport, but Brynn was reluctant. She opted to focus on basketball and volleyball.

“I’ve always begged Brynn to do track,” Jenna said. “In middle school, I was like, ‘You have to try it,’ and she always said no.”

But an unforeseen obstacle pushed Brynn to the track. As an eighth grader, she underwent surgery on her L5 vertebrae.

Rehabbing her injury to prepare for the 2020-21 basketball season, Brynn ran long distances to get back into shape. She discovered her abilities as a distance runner, jogging miles on end with minimal fatigue.

Still, Brynn was hesitant to join the track team.

After basketball season, Brynn ultimately decided to give it a shot. Not only was she returning from injury and entering the year with zero competitive track experience, she faced another challenge: None of her family members had expertise in long-distance running.

“Her mom and I think we can help Jenna, but we don’t know what to tell Brynn,” Jason said. “We didn’t do those events and we’ve never coached them, so Brynn’s safe from our advice.”

Jason’s only tip? “Find some girl that you think is going to run as fast as you want to run.”

Even without guidance from her family, Brynn has shined in her first year on the track. She has won both the 1600 and 3200 and is a member of the 4x800 relay team, which has prequalified for state.

In addition to Brynn’s natural endurance abilities, having an older, more-experienced sister on the team — though in different events — eased the transition.

“We love being on the same team,” Brynn said. “She [Jenna] looks out for me.”

Added Jason, “They always know that they’ll have someone cheering for them. They really do root for each other — they’re pretty good buddies.”

But Brynn isn’t the only one who has benefited from having a sister on the team. Encouragement from Brynn has helped Jenna reach new heights in sprints, dominating each of her events throughout the year and already qualifying for each of them.

Jenna already entered the year as an established runner, medaling in a handful of events at the 2019 state meet, but she’s only gotten better.

“She’s grown a lot as an athlete,” PHS track and field head coach Scott Smith said. “She’s even grown a lot since the beginning of this year, just being able to carry the load of doing those three events.”

Siblings competing on the same teams often try to one-up each other, whether that’s trash talking or just trying to be better than the other. But not the Hillmans.

They instead focus on building each other up.

“I wouldn’t say we trash each other because I know I would lose to Brynn in long distance,” Jenna said.

“And I know that I would lose to Jenna in sprints,” added Brynn, “so we just accept it.”

The sisters both qualified for state in all of their events, posting several impressive performances at the Class 3A West Regional Meet on Saturday. Jenna placed first in the 100, 200 and 400, while Brynn finished in the top seven of both the 1600 and 3200 and was a member of the second-place 4x800 relay team.

Jason said it’s fortunate that their daughters don’t compete in the same events; it avoids the strange position of parents having to watch their children rival one another.

Instead, they get to see their kids excel at their own niche, supporting one another. Not only will Jenna and Brynn see themselves grow as runners, but as leaders.

“They always know that they’ll have someone cheering for them,” Jason said. “It’s really great that they’re both experiencing success, but it means a lot when somebody talks about how nice your kids are. You want them to be nice and work hard. Success at track is an added benefit.”