Following a season as the interim leader of the Northwest College men’s and women’s soccer teams, Rob Hill was named the full time head coach of both squads in December. 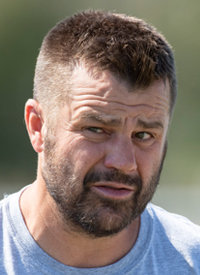 Trapper head coach Rob Hill talks to the Trapper women’s team during a match against the Gillette Edge in September. Hill was recently named the full coach of both NWC soccer teams.
Tribune photo by Mark Davis
By Seth Romsa

Following a season as the interim leader of the Northwest College men’s and women’s soccer teams, Rob Hill was named the full time head coach of both squads in December.

“It was kind of a relief to be hired full time,” Hill said. “It was nice to get that interim title removed.”

Hill jumped into the interim role last spring, after the dismissal of previous coach Aaron Miller just before the start of games.

Hill previously led the Trappers from 2010 until 2017 and was the first coach of the program at its inception in 2010.

Hill said he did not initially plan to take a break from NWC, nor did he originally plan to come back as the interim coach, but he knew both of those things happened for a reason.

“I have come back with a renewed vigor,” he said. “The break was important and I am excited to be back.”

Having already served seven years as the head coach of Trapper soccer, Hill said many things have changed during his time at the college.

“The first time around I tried to do way too much,” Hill said.

During his first stint, he said he did not have a centralized focus on the recruiting process and was sometimes chasing players who would not choose to come to Powell.

This time around, Hill said he’s beginning to focus more on players that he knows will have success at NWC, rather than focusing on some recruits who want to go play on the West Coast.

Another large change from the first time around is the hiring of full time athletic director in Brian Erickson.

Hill said the change from a part-time AD has taken a lot of pressure off his position, removing some of the responsibilities that had been on his shoulders. Now he is able to focus more on recruiting, coaching and how the players are performing in the classroom.

With Erickson as a full time AD, Hill also has fewer responsibilities on game days regarding setting up the live streaming, giving the coach more time to focus on preparation before the matches start.

In junior college, your team is almost guaranteed to change drastically from year-to-year. But one constant that Hill hopes to bring into the program is a program that recruits players based on high character, good academics and the best possible players, in that order.

Recruiting based on character and academics first is one of his top priorities, as he believes that will be a good way to help grow the program even further.

“I want us to be known as a program where parents know they are sending their kids to a good program,” Hill said.

Another goal is to compete for a Region IX title every year. Hill knows the Trappers will not always do that, but it will be a goal for both teams.

The women’s team is coming off a much improved 7-8-1 season; they fell to Laramie County Community College (LCCC) in the playoff quarterfinals. The women’s side will return a large amount of their team, and will look to push further into the playoffs next season.

The men’s side finished with a 2-10-1 record, and also fell short in the quarterfinals against Casper College. Hill said there should be a lot of promising talent coming to the men’s side for this upcoming season, as they look to rebound from a disappointing 2021.

Being named the full time coach again has helped with recruiting, Hill said. Due to the interim label next to his name, Hill said potential players had expressed uncertainty about if he was going to remain as coach.

One thing is now certain: Hill is excited to be back as the full time coach of the Trappers and moving forward.