The Heart Mountain Interpretive Center has received  $3.1 million from the Mellon Foundation to build the Mineta-Simpson Institute and Conference Center.

This marks the largest donation ever … 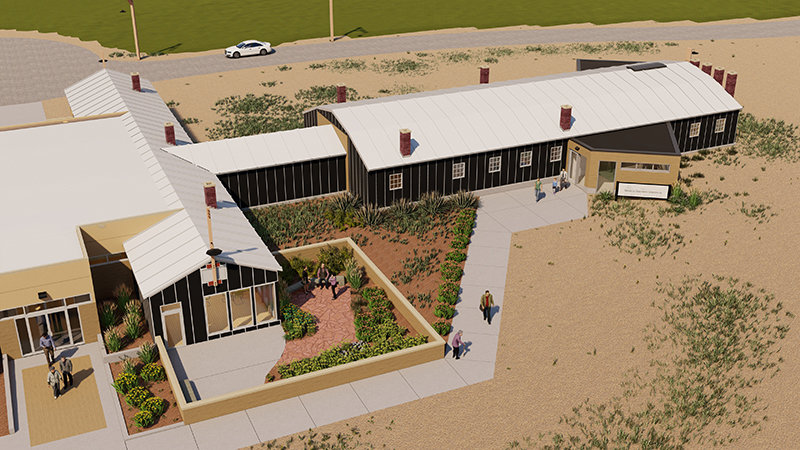 A rendering of the Mineta-Simpson Institute shows what the building will look like upon completion.
Photo courtesy Schutz Foss Architects
Posted Thursday, June 23, 2022 8:15 am
By Braden Schiller

The Heart Mountain Interpretive Center has received  $3.1 million from the Mellon Foundation to build the Mineta-Simpson Institute and Conference Center.

This marks the largest donation ever received by the center.

“The grant is part of Mellon’s Monuments Project, a $250 million effort to transform the nation’s commemorative landscape by supporting public projects that more completely and accurately represent the multiplicity and complexity of American stories,” according to a press release from the Heart Mountain Interpretive Center.

The center, which has been in development for the last 3-4 years, will break ground during the annual Heart Mountain Pilgrimage July 30, according to Interim Executive Director Aura Sunada Newlin.

The conference center will be named in honor of former U.S. Sen. Alan Simpson (R-Wy) and the late Secretary of Transportation Norman Mineta, who died last May at the age of 90.

Simpson and Mineta met at the Heart Relocation Center during World War II. A young Mineta and his family were forced to move there from California, and Simpson, then a Boy Scout, visited the Japanese internment camp.  The two became lifelong friends.

It was heartbreaking that the Center learned of the grant after Mineta’s passing, Sunada Newlin said.

“The Mineta-Simpson Institute will convene workshops for educators and civic leaders, create programming to educate the world about the Japanese American incarceration and promote bipartisan efforts to combat the kind of racism and xenophobia that led to this massive violation of civil and human rights,” according to the press release.

The Mineta-Simpson institute will provide the existing interpretive center with more research and exhibit space, a greater reach and a home for discussion.

“What the center will do is far beyond these great men,”  Sunada Newlin said. “It’s not as much about the past as it is about the present and future of leadership in our country.”

The center also recently received a second grant from the Japanese American Confinement Sites Grant program to turn “Hello Maggie” by Shigeru Yabu and illustrated by Willie Ito into an animated short film.

Yabu, who was taken to Heart Mountain as a child, wrote the story about the pet magpie he adopted during his time at the internment camp.

Simpson and members of the Mineta family will be attending the ground breaking ceremony.