Hay prices are nearly double what they were last year. While jumps in feed prices often leave producers feeling the pinch, the high cost of hay is also putting a strain on anyone with horses, goats … 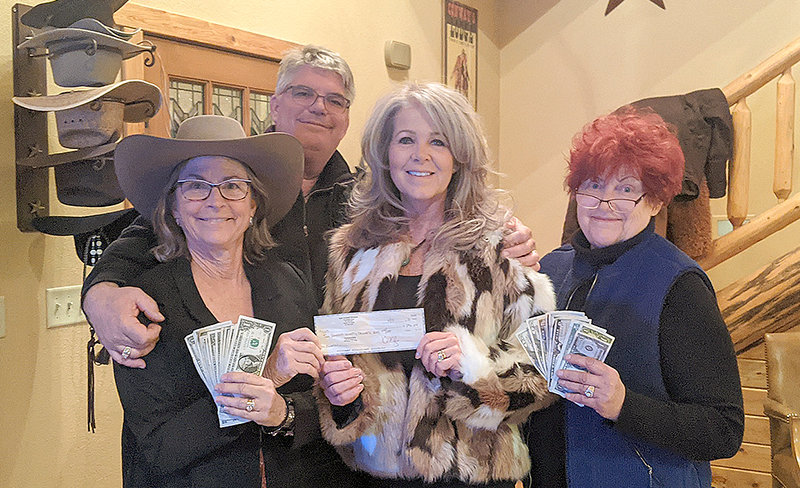 From left, Rebecca Stevens, Kenyon Kyle, Beth Kyle and Kathy McDonald have raised $2,000 to help people who are struggling to feed their animals as hay prices soar to double what they were this time last year.
Courtesy photo
Posted Friday, November 26, 2021 8:25 am
By Kevin Killough

Hay prices are nearly double what they were last year. While jumps in feed prices often leave producers feeling the pinch, the high cost of hay is also putting a strain on anyone with horses, goats or cattle.

In past years, good quality alfalfa hay went for about $150 per ton. This year, it’s twice as much.

There are a lot of expenses in raising horses, but with no supplemental pasture, a single horse can go through roughly a half-ton of hay per month.

Rebecca Acker, an animal rescuer with Four Paws Rescue, has a friend in Wapiti who has been going through cancer treatment for the past two years. Acker declined to give the friend’s name, but said she’s on disability and was struggling to cover the cost of feeding her horses.

“She was in the position of trying to decide if she was going to buy hay for her animals, or propane and electricity,” Acker said.

Acker started calling around Wapiti to see if anyone had some extra hay from last year’s cut she could buy for her friend — she wasn’t looking for donations — and found nothing.

“Everybody is hanging on to any hay from last year and any produce from this year,” Acker said.

She finally managed to help her friend find feed for her horses, but with a long winter ahead, Acker said it’s likely other people might be in the same situation and need help feeding their animals.

Dr. Ray Acker, a veterinarian with Big Horn Animal Care Center and Rebecca’s husband, said it’s vital for animals to have plenty of food and water during the cold winter months.

“They can stand out in 20-below weather with 20 mile per hour winds and be alright, so long as they have a source of food and water,” Dr. Acker said.

The veterinarian pointed to a study done at Michigan State in which cows were put in freezers at minus 60 degrees Fahrenheit. While frostbite was a problem at that temperature, if the animals had enough food and water, they didn’t suffer any other health effects.

Rebecca Acker has coordinated with others to help those who are having trouble paying for their animal’s hay. They’ve set up a bank account at First Bank of Wyoming.

Beth and Kenyon Kyle, owners of the Wapiti Lodge, are donating a portion of their proceeds to the effort. In October, they wrote a check for $325. Rebecca Stevens of Four Paws Rescue, Inc. raised $1,500 for large animal feed. Altogether, they’ve raised $2,000 so far.

(Kathy McDonald of 3 Dog Rescue is also helping to raise donations of food for smaller pets, such as dogs, cats, and birds.)

Most animal owners can afford to feed their animals hay, but they are taking a hit to their wallets.

In some cases, she’s seen hay for sale up to $350 per ton. Samet-Brown isn’t sure the sellers are getting that much for the feed, but it’s what they’re advertising.

“It is the highest we’ve ever seen,” Samet-Brown said. “But horse people are horse people, and they will pay what they have to, to feed their animals.”

She grows her own hay, which is helping keep the costs down. She also anticipated the shortages and planned for it. Others are having to sell off younger horses.

“Even though they’re young, it’s one less mouth to feed,” Samet-Brown said.

Besides being expensive, she said hay is often hard to find. Samet-Brown recently helped a friend find a seller through her connections in the horse-loving community, but it wasn’t easy. Some people might have half a ton they could sell, but are holding onto what they have or have already promised the hay to someone else in need.

Samet-Brown added that it’s not a case of price gouging,  just the mechanics of supply and demand. Fertilizer and fuel prices are up, along with inflation and other market pressures. Add in the drought — which stressed supplies that were made thin in 2020 from COVID-19 — and it creates the perfect storm for skyrocketing feed prices.

Quin LaFollette, co-owner of Black Summit Cattle Company, agrees those factors are driving hay prices up. Black Summit, LaFollette said, raises much of its own hay. He said the operation could sell off some hay at a good profit, while helping those who need it, but the business would have to sell off some cattle first. With so much invested in the genetics of their herd, it wouldn’t be profitable.

“There’s an opportunity cost there,” he said.

While not great for a lot of crops, LaFollette said the area’s arid climate is really good for growing hay. All that high quality product, though, is sold to out-of-state producers. Sometimes, Black Summit will supplement supplies of their high quality hay with lower quality hay from Montana, but even supplies of that are low due to the drought.

With fertilizer prices 40-50% higher than last year, LaFollette said hay producers won’t be growing as much hay next year, either.

“It’s a dynamic problem we have,” he said, “and it’s a problem that’s not going to end soon.”

Anyone wishing to donate to Rebecca Acker’s fundraising effort can drop off donations to “All God’s Creatures Food Bank” at First Bank of Wyoming.

“If each person in Park County donated just one bale of hay, we could help more people,” Acker said.