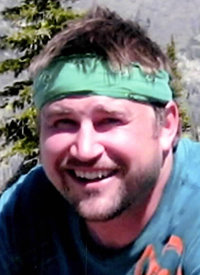 Hank Norman Ray died by his own hands on April 26 at the age of 33. He is in Heaven now where he is knowing the peace of God. Everyone loved Hank as Hank loved all.

Hank graduated from Powell High School in 2006 where he lettered in football (all-state), wrestling and soccer. He earned a football scholarship to Montana Northern. He transferred to Boise State where he earned his degree in marketing.

Hank enlisted in the Army and proudly served his country with honors in Iraq, in the 391st Engineers. He suffered PTSD from the war, which led to his death.

Hank worked for the Forest Service in Idaho City, where he was the head of trails and recreation. He loved his job where he could be in the mountains he treasured. He loved anything outdoors: fly fishing, camping, skiing and hunting. Hank also enjoyed gardening and growing flowers.

Hank’s smile and his love are missed dearly by his family, friends and the lives he touched.

Hank was buried with military honors on May 3, in Idaho Veterans Cemetery in Boise, Idaho. A celebration of his life followed at the community hall in Idaho City.