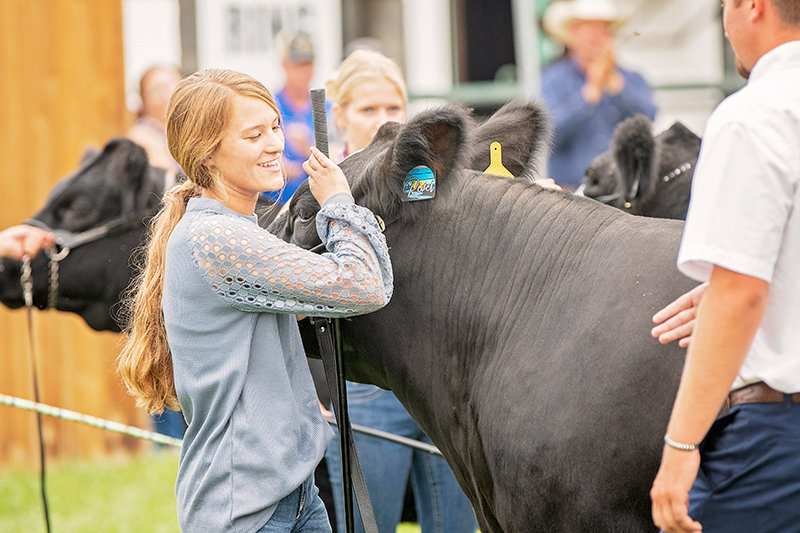 Hadley Cooper smiles as the judge awards her the top prize at the Market Beef Show at the Park County Fair in July. Cooper showed three steers at the 2021 fair and had the Champion Heavy Weight Steer, the Champion Medium Weight Steer and the Overall Grand Champion Steer.
Tribune photo by Carla Wensky 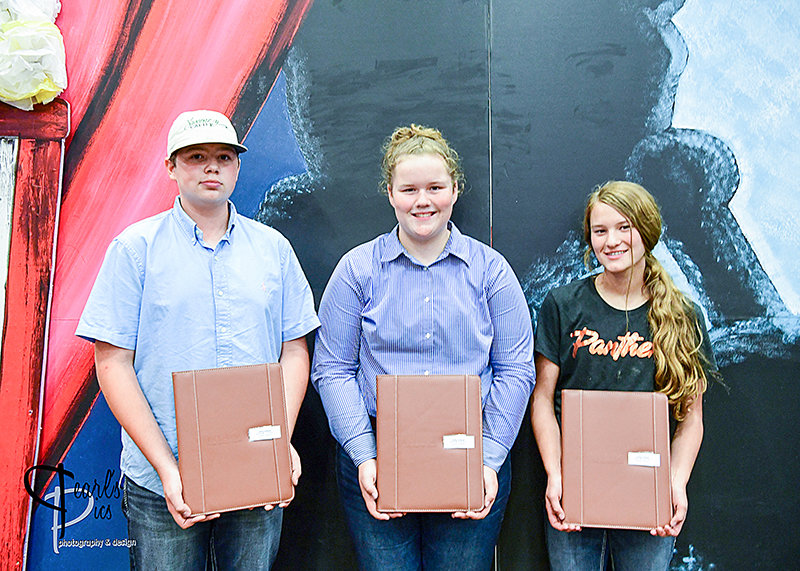 Hadley Cooper of Powell (at right) placed third in the Junior B Division of the cattle judging contest at the 2021 National Junior Angus Show (NJAS) in Grand Island, Nebraska. Cooper is pictured with Landon Marshall of Weyers Cave, Virginia, who placed first, and Molly Hansen of Carrington, North Dakota, who finished second.
Photo courtesy Pearl’s Pics
Previous Next
Posted Thursday, September 30, 2021 8:10 am
By Tessa Baker

Cooper placed third in the Junior B Division of the cattle judging contest at the 2021 National Junior Angus Show, which was held in July in Grand Island, Nebraska.

Cooper called it a “great experience.”

“I was able to show my heifer, compete in the cattle judging contest and make new friends,” she said. “I enjoyed this judging contest because it was all cattle, which is my favorite species to judge.”

Competing on a national level made other judging competitions and cattle shows seem easier, she said, “since that was such a nerve-racking big show.”

Growing up on a farm has helped Cooper learn about livestock. She’s also learned from helping sort cattle with her mom, Andrea Earhart, and grandpa, Larry Earhart.

A member of the Willwood 4-H Club, Cooper has also had help from 4-H leaders and members.

Cooper’s steers were also fourth and fifth in the ultrasound contest, which was new this year.

In addition, Cooper showed eight head of breeding cattle at the fair, and her heifer was named the Supreme Female.

“I have had a goal of having the Champion Steer and the Supreme Female, but I never dreamt I would win them both in the same year,” she said.

“I love showing cattle,” she said, adding that she looks forward to the Park County Fair all year round.

It’s nice to see all hours in the barn pay off, she said.

“The fair is when all the year’s work comes together,” Cooper said.

Cooper is an eighth-grader at Powell Middle School, and she hopes to keep judging cattle in FFA in the future, and maybe even in college.