Distrustful of the voting machines used across Wyoming and other parts of the country, a group of Park County residents is making a push to review the results of this year’s primary election by …

Park County commissioners and members of the public listen to Wyoming Secretary of State Ed Buchanan (appearing on screen) Tuesday while discussing a request to allow a group of volunteers to hand count the results of August’s primary election. Commissioners delayed a decision after Buchanan suggested that a hand count could run afoul of state law.
Tribune photo by CJ Baker 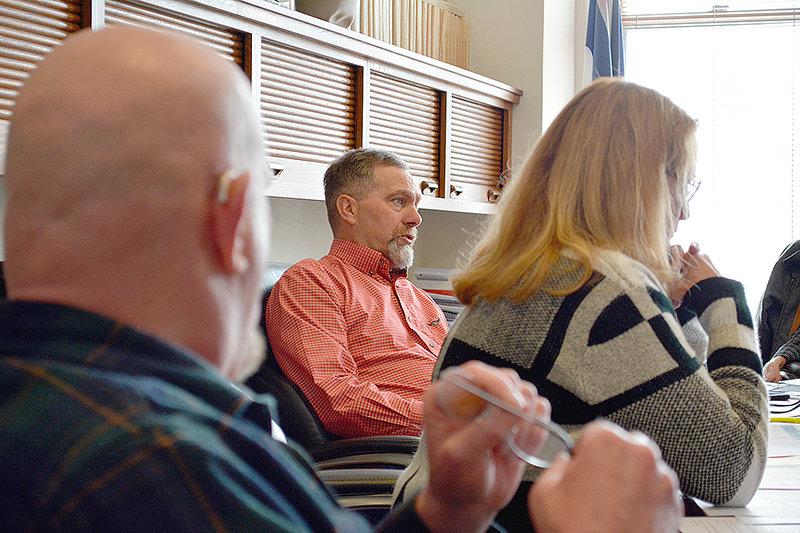 Flanked by fellow commissioners Scott Mangold (at left) and Dossie Overfield, Park County Commissioner Lee Livingston speaks during a Tuesday discussion about hand counting the results of the primary election. Livingston said he has no problem with allowing the experiment, as long as it’s allowed under state law.
Tribune photo by CJ Baker
Previous Next
Posted Thursday, April 7, 2022 8:25 am
By CJ Baker

Distrustful of the voting machines used across Wyoming and other parts of the country, a group of Park County residents is making a push to review the results of this year’s primary election by hand.

On Tuesday, a roomful of proponents asked Park County commissioners to allow them and other volunteers to effectively audit August’s election by hand counting the votes after the ballots are processed by the machines.

South Fork resident Boone Tidwell, one of the group’s leaders, framed the request as a matter of constitutional rights and predicted some people won’t vote unless ballots are counted by hand.

“Whatever decision you make today, folks, we think will have consequences. Not only here in Park County, but on a state level, and possibly a national level,” Tidwell told commissioners. “There’s a lot of attention on this particular issue right here and what we’re doing here in front of you guys. So we’re asking you to please choose wisely.”

Commissioners postponed a decision to a later meeting, citing a need to get legal advice from Park County Attorney Bryan Skoric.

“We have to get some answers from the county attorney,” said Commission Chairman Dossie Overfield.

Secretary of State Ed Buchanan, who spoke via Zoom, recommended that commissioners consult with Skoric, suggesting that state law does not give the board the power to authorize a hand count.

Members of the group, however, pushed back.

“Where in the Constitution does it give you the authority to deny us?” Powell resident and former Park County Republican Party chairman Larry French pressed Buchanan.

“It’s not me sitting here saying that, ‘I forbid you to do it,’” the secretary responded in part. “I’m pointing out that you probably don’t have, in my opinion, just from looking at this, the statutory authority to do it.”

Tidwell then offered that “statute cannot trump my constitutional right.”

“It’s that simple,” he said, to applause from the crowd.

Commissioners, however, indicated they still have questions, including about how long a hand count might take, what impact it might have on their staff, whether enough volunteers would show up and the legality of the effort.

‘Nobody has any confidence’

Tuesday’s request stemmed from continuing concerns over the 2020 election, which Tidwell described as “the latest wreck.” The angst has played out on a national stage over the past two years, with former Republican President Donald Trump — who drew more than 76% of the votes in Park County but less than 47% nationwide — claiming the election was “rigged” in favor of Democratic President Joe Biden. A series of lawsuits and other attempts to challenge the results have been unsuccessful and no widespread irregularities have been proven, but mistrust has persisted.

Dave McMillan of Cody, another of the group’s leaders and a Park County Republican Party precinct committeeman, said it’s not a partisan issue.

“There’s not a person I’ve talked to in my area, yet, that has told me they think the elections were fair in 2020,” McMillan told members of the Park County Democratic Party in February. “Nobody has any confidence in this.”

He and Tidwell had approached the party looking for support on a joint effort, but got some pushback from several local Democrats.

The party members later passed a resolution stating that “the Park County Democrats have confidence in the integrity of the current election system.”

Tidwell told commissioners that the debate over the validity of the machines won’t be resolved.

“If you are opposed to the voting machines, your preference is that we throw them in a ditch and light them on fire. And if you love the machines, you don’t want anybody to intrude in that environment,” Tidwell said Tuesday. “So we’re at an impasse.”

He said the plan to have all of the ballots run through the voting machines and then hand counted by volunteers was a compromise. McMillan said the proposal “harms no one and satisfies the concerns of everyone.”

The proposal pitched to commissioners on Tuesday differed from the group’s original vision, which would have involved volunteers receiving and tabulating voters’ ballots before they went into the machine. Tidwell said they altered the plans after hearing from people who said, “I don’t want you to know my vote.”

He also was clear in acknowledging that the results tabulated by the voting machines will be the official results.

“If our [hand] count comes out different than yours, we’re stuck with it [the machine count],” Tidwell said, “but we’re gonna have a whole lot more information and a whole lot more knowledge and be able to address that moving forward in the future.”

In his remarks to the commissioners and the group, Secretary Buchanan suggested that the whole hand count may have to wait until the law is changed. Buchanan said he’s repeatedly told people that, if they want to return to paper ballots, it’s a policy decision that should be taken up with the Wyoming Legislature.

He noted a statute that refers to votes being counted by machine, saying that, “Each individual vote shall be determined by the voting equipment and shall not be determined subjectively by human tabulation …”

However, Commissioner Scott Mangold noted that, even under the group’s proposal, the machines will still be doing the counting.

“We keep talking about statutes, but I think basically this is just sort of an experiment to start with,” Mangold said.

Commissioner Lee Livingston agreed, saying that, “if you’re not submitting that as the official results, it’s quite possible that hand counting could be [done].”

“As long as we’re not stepping outside of that [the law], at this point in time, I don’t have a problem with looking at it,” Livingston said.

Chairman Overfield said the board needs to get a legal opinion from County Attorney Skoric.

Beyond the legalities, commissioners also had questions about the logistics.

As a test run, the hand count group enlisted the help of about 200 high schoolers in Powell, Cody and Meeteetse, who participated in a mock election a few weeks ago. The group then met at the Park County Library in Cody and calculated the results by hand. (Kanye West won a state Senate race in the Meeteetse area after being written in by a number of students, Tidwell laughed.)

In their first attempt at counting the 200 ballots, the group took an hour and 20 minutes, French said, but a second try took about 35 minutes. He indicated that a three-person team needed about a minute-and-a-half per ballot.

At that pace — and assuming a similar turnout to the 2018 primary election, in which 8,341 voters participated — it would take more than 600 man-hours to hand-count all of the results. To get done by a state deadline of 10:30 p.m. on election night, it would take more than 150 volunteers. For comparison, Park County had 117 election judges in the 2020 general election.

Commissioner Joe Tilden questioned whether there would be enough volunteers to conduct the hand count, noting that a number of people who pledged to serve as election judges in 2020 backed out.

“That was before the latest wreck with the 2020 election, Mr. Tilden,” Tidwell said. “And you know, there are a whole lot of people that care now that didn’t care two years ago.”

Tidwell told the Democrats in February that “hundreds” of people would help with the effort.

While Tidwell said there would be zero cost to the county, Commissioner Lloyd Thiel noted that regular election workers would need to stay at the polling places later on election night to monitor the hand counting.

“Maybe there isn’t any more cost, but there’s a hell of a lot more work on these precincts for these election judges to do this experiment, if you will,” Thiel said. “I’m not saying it’s bad, I’m just saying there’s definitely some inconvenience here in the county.”

Tidwell responded that, “if it requires a little more time on our part, as a voter, as a judge, as a participant in that process, you owe it to this community to make sure that that is specifically correct.”

While expressing doubts about the legality of hand-counting the vote, Secretary Buchanan expressed full support for the group’s general aim of bolstering public confidence in the integrity and accuracy of their elections.

“... I don’t think anybody in the state disagrees that the more things we can do to give greater confidence in elections, the better,” he said. “Because … if people don’t believe in your elections, nothing else matters. It really doesn’t.”

Even before the 2020 election, Buchanan said his office began an audit effort in which it will take a statistically significant sample of ballots cast around the state and then compare them to the vote record generated by the voting machines.

“If those ballots check out, and we know that those actual ballots cast were correctly counted by the machine, then we have our 99-point-whatever [percent] confidence interval in our election,” Buchanan said.

In a Tuesday evening email to commissioners, Park County Democratic Party Chairman Jan Kliewer said he doesn’t want taxpayer dollars to be spent on the hand count and that he thinks the statewide audit planned by Buchanan “would go further to build trust than an experiment in one county.”

“My fear however, is if the results of 61 lawsuits of voter fraud thrown out nationwide doesn’t inspire confidence, what will?” Kliewer wrote.

During the meeting, County Clerk Colleen Renner noted that the county conducts mandatory public testing of its voting machines ahead of the elections to show how the process works.

Renner said she’s only had two people show up during her eight years as clerk.

“That causes me to believe you’re not questioning it,” she said, as members of the crowd murmured objections. “So if you are questioning it, please come to the public testing.”

Commissioners didn’t set a date for their next discussion on the requested hand count. The primary election is Aug. 16.

Powell woman marks Earth Day by cleaning up at home

From the inside looking out