Grizzly bear deaths on the rise in 2021

It’s been a tough year for grizzly bears in the Greater Yellowstone Ecosystem. As of Wednesday, 27 individuals had been euthanized due to conflicts with humans, killed by other bears, hit by …

Grizzly bear deaths on the rise in 2021 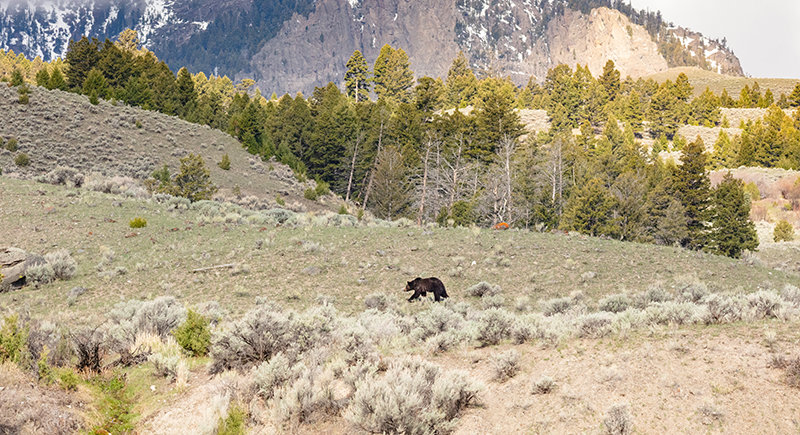 A grizzly bear roams the area above the Gardner River in Yellowstone National Park in May. Data indicates that there have been more bear deaths in the Greater Yellowstone Ecosystem this year, including a jump in the number of bears euthanized by wildlife managers following conflicts.
Photo courtesy Jacob W. Frank, National Park Service
Posted Thursday, August 19, 2021 8:20 am
By Mark Davis

It’s been a tough year for grizzly bears in the Greater Yellowstone Ecosystem. As of Wednesday, 27 individuals had been euthanized due to conflicts with humans, killed by other bears, hit by cars or drowned in canals so far in 2021.

Another five carcasses have been found that are suspected to have died in late 2020, bringing the total number to 32 known or probable deaths reported this year. That’s more than the 30 grizzly bear deaths reported in all of 2020 — and there are still several months left before the species typically hibernates, including the time period when hunters will be out in the backcountry areas.

Dry conditions mean the bruins might be more aggressive in search of food, said Luke Ellsbury, large carnivore biologist with the Wyoming Game and Fish Department.

“Drought means a busier fall because bears will be more food-stressed,” Ellsbury said, adding, “We’re busier than average this year.”

The U.S. Fish and Wildlife Service makes the call on management actions for the species due to being listed for federal protections under the Endangered Species Act. But Game and Fish biologists are tasked with capturing, moving or euthanizing bears selected to be relocated or removed from the ecosystem.

So far this year, 17 grizzly bears in the Greater Yellowstone Ecosystem have been euthanized including 16 in Wyoming. A total of 13 grizzlies were euthanized last year, with nine in Wyoming, in a year that saw a below-average number of lethal removals.

Bears are captured when they become aggressive, kill livestock or receive food rewards and become accustomed to people. Wildlife managers attempt to move grizzlies to more suitable areas when possible.

For instance, on July 23, the department relocated a subadult female to the Five Mile Creek drainage — about 5 miles from Yellowstone National Park’s East Entrance — after it killed cattle on a grazing allotment north of Pinedale.

When relocation is warranted, the department says it considers a bear’s age, sex and the type of conflict it was involved in, as well as potential human activity in the vicinity of the relocation site. The Fish and Wildlife Service and the Game and Fish Department say they will not move dangerous bears or those that repeatedly kill livestock or cause conflicts.

New reports are now available in a downloadable PDF document. The reports can be found at on.doi.gov/3xTzgoZ.