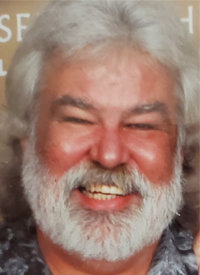 Raised in San Diego, he was extremely close to his parents and sister. All four spent time together as archers, boating, camping, hiking, fishing, and attending Kevin’s motocross races, where from age 11 he began collecting a shelf of trophies.

Kevin was a big man in many ways, not just stature, but in his caring, generosity, sense of humor, and ability to instantly connect with people. He was a loyal friend, mentor, had the highest of ethics both in his personal life and career, and was exceptionally accomplished from Air Force aviation electronics and computer technology, to refurbishing cars like his 1957 Chevy. Kevin entered the oil industry after leaving the Air Force, and became an extraordinarily successful, respected and sought after Directional Driller. When he retired, word circulated quickly and the following day he received four job offers from companies trying to lure him back into the industry. But after 40 years in the business, he declined the offers.

Though having none of his own, children were drawn like magnets to him and vice versa. His fun, genuine caring and patience as their teacher of many things brought him and the children much joy. He was Santa Claus for a number of Christmases, and was as delighted to play the part as the children were to climb on his lap and share their presents list. He loved animals, especially his 1 1/2” bright green parrotlet, “Christi” named after Fleetwood Mac’s Christine McVie. Some of his most memorable photos are Christi’s head peeking out like a little green dot from his long white beard.

In 1997, at 43 years old, he married for his only time. Renella Desormeaux, the true love of his life, died tragically on Christmas Day before their fifth wedding anniversary.

After his career took him to several continents, including states and countries in Europe, North and South America, and Africa, he chose Powell as his home, saying, “with the peace, beauty and special people, this is where I belong.”

At a private graveside gathering on June 10 at Riverside Cemetery in Cody, multiple friends shared favorite stories about Kevin and their special relationship with him, each affirming how much they would miss him.

He is survived by his sister, Beverly Wolfe-Peterson (Gregg) of Ventura, California, a loving aunt, two uncles, and numerous cousins and their families, as well as many people who considered him family.