Friends until the end

As a parade of motorcycles roared by the Aladdin Apartments on Bent Street, Rob Sparks raised his arms in the air victoriously from his porch, flashing his famous smile.

Just down the block, an …

Friends until the end 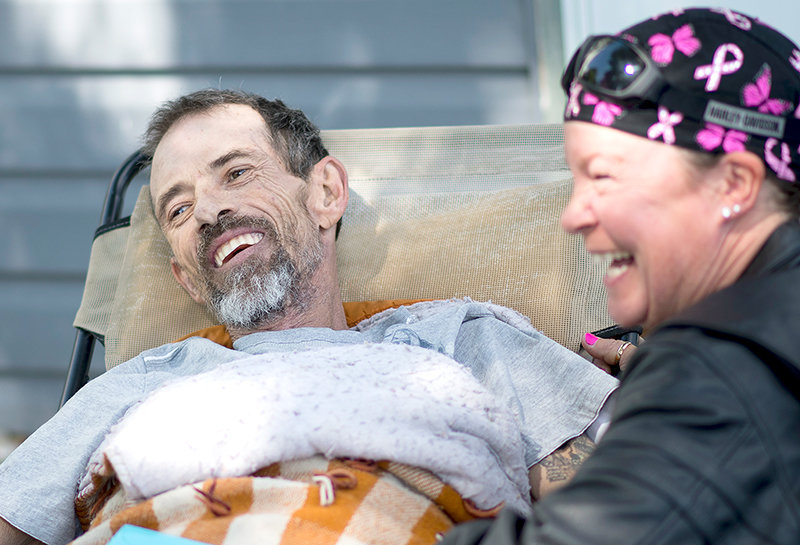 Rob Sparks laughs with a friend after seeing Elks Club members cruise by on motorcycles last Saturday. The event was the highlight of a day-long benefit for the Powell resident, who was suffering from pancreatic cancer. Sparks died Monday.
Tribune photo by Carson Field 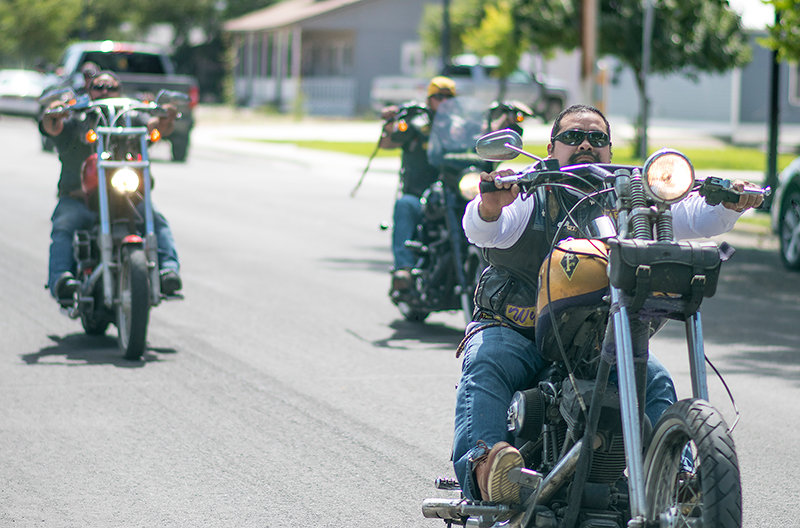 Riders pass the home of Rob Sparks Saturday during a benefit for the Powell resident suffering from terminal cancer.
Tribune photo by Mark Davis 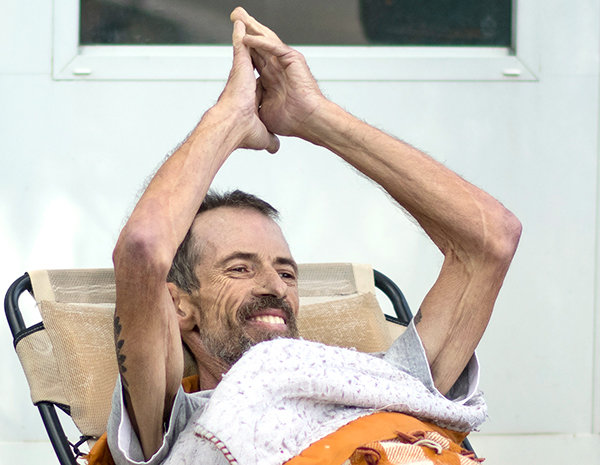 Rob Sparks puts his hands in the air in celebration of a parade of motorcycles passing his Powell apartment Saturday.
Tribune photo by Mark Davis
Previous Next
Posted Thursday, September 2, 2021 8:20 am
By Mark Davis

As a parade of motorcycles roared by the Aladdin Apartments on Bent Street, Rob Sparks raised his arms in the air victoriously from his porch, flashing his famous smile.

Just down the block, an all-day party was being thrown for him. Sparks wasn’t too keen on the idea of a benefit being thrown in his honor, friends and family said. He had always been the philanthropist, not the cause.

Seeing him so happy as the parade passed brought tears to many of those sharing the moment. Sparks hadn’t enjoyed many moments in the past few months since being diagnosed with pancreatic cancer.

That he loved motorcycles was no secret. Sparks had multiple bikes, including his custom “bagger.” His burgundy Harley Davidson was usually parked at the curb on Bent, visible from his apartment window.

Sparks also owned many sweet vintage cars, including a dark sea-blue 1965 Ford Thunderbird. He loaned the classic to his “adopted” niece, Shadyn, for Powell High School’s prom in May.

They weren’t family, but they might as well be, she said. “I’m not sure what you call it, but we all considered each other family.”

“He could walk into a room and pretty much hold a conversation with anyone and make them feel welcome,” Josh Degraffenreid said.

He loved to talk about the Dallas Cowboys and had a collection of memorabilia enshrined in his living room. The Degraffenreid family, along with Ramon Rodriguez, have been taking care of Sparks since his diagnosis.

Saturday’s benefit started in the morning at the Elks Club with a cornhole tournament, bake sale and silent auction. Homemade pies, cookies and delicious loaves of zucchini bread filled a table alongside donated items from many area businesses for the auction.

In the afternoon the local cyclists roared past Sparks, stopping to toast him. Then, the Undecided rocked the Elks Club and nearby neighbors into the night.

“It was an all-day affair,” said Annette Gonzalez, who helped organize the event.

But Sparks couldn’t make it to the benefit. His deteriorating health kept him at home. His friends at the Elks Club missed his gregarious nature and big heart.

“He would do anything to help you out. He’d give you the shirt off his back,” said Becca Varian, bartender at the club.

Sparks often lent a hand to those in need and donated monthly to St. Jude Children’s Research Hospital.

He was a master woodworker, Degraffenreid said, working most recently for Full Curl Construction in Cody. As hard as it was for Rob to make it outdoors to see the parade of custom cycles and greet guests, he relished the occasion, Cari said. “It was the highlight of his last two months.”

Two days after the visit, Sparks died in his apartment, surrounded by friends. He still had some entries on his bucket list, Rodriguez said. “He always wanted to go skydiving and to a Cowboys game,” he said.

Degraffenreid said the proceeds from the benefit will be used for a celebration of Sparks’ life, with the remainder going to St. Jude’s, “like he would have wanted,” Josh said.

A celebration of Rob Sparks’ life is set for the afternoon of Sept. 18 at Deb Martin’s property, 1118 Barrows Road.