Over the past 15 years, Jenny and Mike “MJ” Stearns have worked to pay it forward. Now, there’s an opportunity for community members to perhaps pay it back a little. 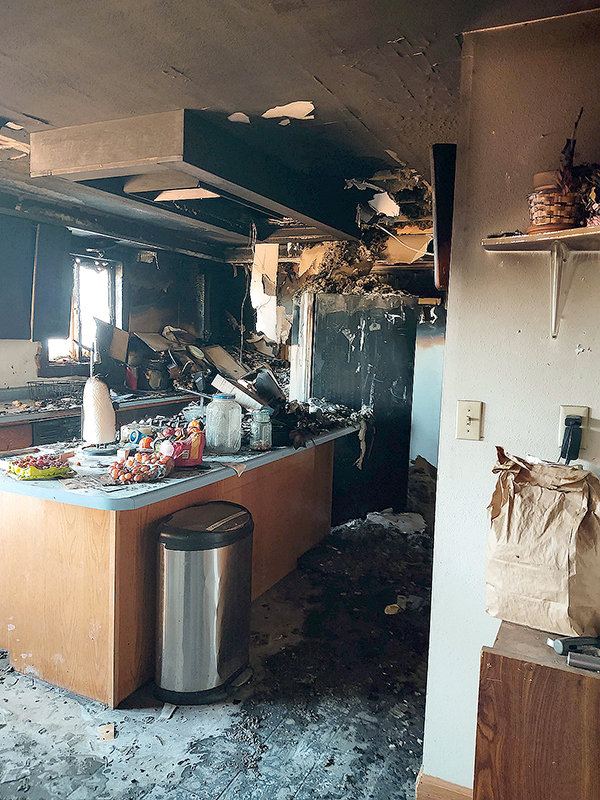 An October kitchen fire at the rural home of Mike and Jenny Stearns dealt substantial damage. A Friday night dinner will raise funds for the family.
Courtesy photo
Posted Thursday, November 18, 2021 8:25 am 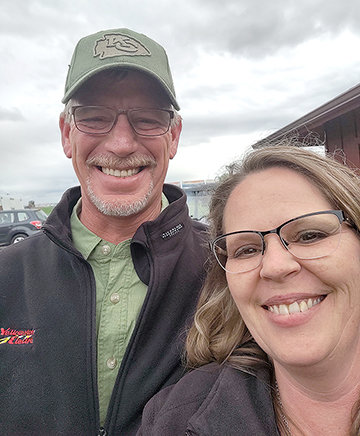 Over the past 15 years, Jenny and Mike “MJ” Stearns have worked to pay it forward. Now, there’s an opportunity for community members to perhaps pay it back a little.

A fire broke out in the Stearns’ kitchen on the afternoon of Oct. 17. While the flames were limited to only a portion of their Lane 11H home south of Powell, the heat damaged the surrounding rooms and smoke blackened the ceilings as it filled the entire house. The smoke also inflicted the most painful loss, claiming the lives of the family’s two dogs, a yellow Lab named Xena and a Chesapeake Bay retriever named Boone.

The quick work of the Powell Volunteer Fire Department helped save the underlying structure, but it’s not livable and will need to be stripped down to the studs and rebuilt. Further, most of the Stearns’ possessions and those of their children were either destroyed or ruined.

“We’ve lost a lot,” Jenny Stearns said this week, before quipping that “it was a good opportunity to clear our closets.”

While she’s keeping a positive attitude, replacing what they’ve lost is “definitely a long process,” she said.

A Friday spaghetti dinner is aiming to help speed that process up.

The doors of the Powell Eagles lodge will open at 5 p.m., with dinner served at 6 p.m. and a live auction at 7, with a silent auction going in the background. Tickets are $10 for adults, $5 for kids 10 and under or $25 for a family.

Auction items were still coming in on Wednesday, but the lineup already included prints from local photographers and painters, a set of tickets to a Denver Broncos football game, some firearms, gift certificates, gift baskets and a mystery box. The fare is spaghetti, being cooked by a private chef who, like everyone else involved with the event, is volunteering his time for the cause.

Lisa Stearns, who is Mike’s sister, is organizing the event. She said insurance will eventually cover most of the family’s losses, but “it’s going to take a long time for insurance to kick in.”

In the meantime, “there are definitely expenses that are going to have to come out of pocket,” Lisa said, and, “I feel that we can help them get through.”

Part of her motivation, Lisa said, is the fact that her brother and sister-in-law “are always willing to help anybody with anything at any time.”

“That’s just who they have always been,” Lisa said.

Over the years, Mike and Jenny have fostered 35 children and adopted four alongside one biological child; today, roughly 10 of them might show up for any given holiday, Jenny said.

She said they’ve worked to provide a place where children can get some separation from tough situations and take a breather. Even now, as the family temporarily lives in some smaller quarters in town, Jenny recently offered up her couch to a former foster child having an issue at his home.

Through the fundraiser, Lisa said she wants her family members to know they have the Powell community’s support.

“For everything that Mike and Jenny have done with being foster parents, adoptive parents and just willing people in this community, I want them to understand how much they mean to this community,” Lisa said. “Because I know this community will show their support to them.”

Jenny added that the family has already felt the support. That includes a friend who hosted a Pampered Chef party to help replace some of her own beloved Pampered Chef equipment that was lost in last month’s fire.

“The community has been phenomenal,” Jenny said, “from the response time of the fire department and communication during everything, [the] phone calls and messages and things going on since then.”

Lisa added that the Stearns’ willingness to assist others will continue into the future.

“It’s all going to get paid forward,” she said, “without a doubt.”

For those who can’t make Friday’s dinner, a Stearns family benefit account has been set up at Pinnacle Bank.