A fast and dominant start has catapulted the Panther freshman girls’ basketball team to a 4-0 record, winning each game by at least 20 points.

A rivalry game greeted Powell out of the winter … 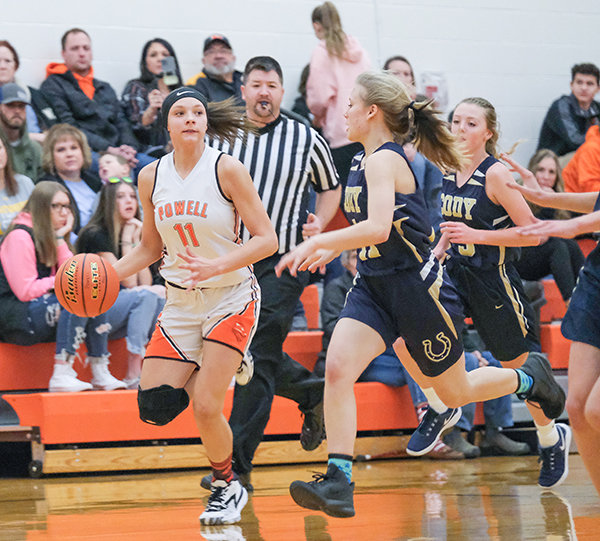 Catelynn Floy pushes the ball up the court against Cody during their matchup on Monday. The Panthers are out to a fast 4-0 start on the season as they head to Buffalo for a freshman tournament on Saturday.
Tribune photo by Seth Romsa
Posted Thursday, January 6, 2022 8:20 am
By Seth Romsa

A fast and dominant start has catapulted the Panther freshman girls’ basketball team to a 4-0 record, winning each game by at least 20 points.

A rivalry game greeted Powell out of the winter break, as they hosted Cody on Monday with hopes of continuing their strong early season play.

The Fillies came out fast, jumping out to a quick 4-0 lead in the first minute, but Powell was able to shake the rust and take an 18-8 lead into the second quarter.

“I thought we started a little slow but the girls came together and continued to play well,” PHS freshman coach Andrew Borcher said.

The Panthers continued their momentum into the second off of a high defensive effort, leading Cody 31-13 at halftime.

Despite only having six players and being unable to press as much as Borcher liked, the Panthers continued their first half success and dominated the second half. They defeated the Fillies 53-22.

The Panthers were led in scoring by Catelynn Floy with 20 and Saige Kidd with 15 points.

It was the fourth straight 20-plus point victory for the Powell freshmen. Their season started with a tournament in Lovell just before Christmas break, on Saturday, Dec. 18.

In their season opener, the Panthers took on hosts Lovell, jumping out to a quick lead and using their defense to create a high scoring game for their offense.

“Going into any season the first game is always a tone-setter for how we are going to play,” Borcher said. “I wanted to see the girls play fast and utilize our defense to create for our offense. I think with this group this year [they] will fit nicely into this philosophy.”

Up 23-8 at halftime, the Panthers continued to grow their lead thanks to their years of playing together, mixed with their size and ability to run the floor.

Powell beat the Bulldogs 42-19, behind 10 points from Floy and Kidd. Kenna Jacobsen was close behind with nine points.

With little time to rest, the Panthers had a quick turnaround, squaring off with Worland just a couple of hours later. But the PHS girls did not slow down.

A very fast start saw Powell ahead 16-2 after the first quarter, and they continued that momentum to cruise to a 33-6 lead at halftime. They defeated the Warriors 53-11.

“We took advantage of our defense creating opportunities and our ability to play fast,” Borcher said.

Another dominant team performance had Kodee Asay leading the team with 13 points, followed by Jacobsen with 10 and Alexa Richardson and Kidd both scoring nine.

Immediately after the Worland contest, the Panthers played one final game against Thermopolis before heading into the winter break. The third game of the day can be a time when teams start to see tired legs, but the Panthers showed no signs of slowing down against the Bobcats.

A dominant first half had Powell out to a commanding 35-3 halftime lead, and they continued that play into the second half. They capped their first weekend of play 3-0 after defeating Thermopolis 56-12.

The Panthers were led by Richardson with 14 points, Kidd with 13 and Asay with 11.

The freshman girls will look to build off their early season success, as they head off to a freshman tournament in Buffalo on Saturday, and host Lovell on Monday.