A fast start to the season followed by a rough patch has led to mixed early season results for the Panther freshman boys’ basketball team, as they hold a 3-2 record in the young … 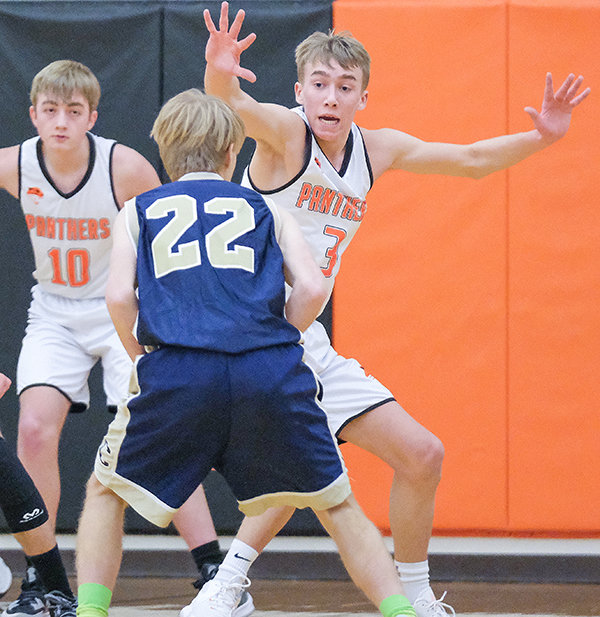 Evan Whitlock works to defend the 3-point line against Cody on Monday night. The Panther freshmen have experienced highs and lows in the early season en route to a 3-2 record.
Tribune photo by Seth Romsa
Posted Thursday, January 6, 2022 8:10 am
By Seth Romsa

A fast start to the season followed by a rough patch has led to mixed early season results for the Panther freshman boys’ basketball team, as they hold a 3-2 record in the young campaign.

The season started for Powell on Dec. 13 as they went on the road to Rocky Mountain to take on the Grizzly Bears.

A high scoring contest for the Panthers got them an easy first victory, as they defeated Rocky Mountain 65-31.

Zane Graft led the team with 20 points, followed by Alex Jordan and Evan Whitlock, who both added 14.

An early season tournament followed in Lovell the following weekend, with the first game coming against Tongue River.

Another high scoring performance mixed with a good defensive effort led to a dominant performance by Powell as they stormed past the Eagles 71-28.

“The players love offense, but I’m actually more excited about their defensive potential at this point,” Panther freshman head coach Greg Stenlund said. “Hopefully I can get them just as excited to excel at defense as they are excited to improve their offensive games.”

Keona Wisniewski led the Panthers with 21 points and Jordan followed closely with 18.

Stenlund said this team came into the season with a lot of experience under their belt, as they are coming in with a great work ethic and are very competitive.

Going into their second game of the tournament, the Panthers had a rematch against Rocky Mountain and came out with the same result, dominating in a 56-27 victory.

Wisniewski again led the way with 20 points, followed by Dawson Griffin with 13 and Graft with 11.

Coach Stenlund said Jordan, Wisniewski, Graft and Whitlock have already had the opportunity to play at the junior varsity level, which has given them a boost in the freshman games.

“I appreciate having my freshman players play at the upper levels,” Stenlund said. “It slows the freshman games down for them and it always makes them better players overall.”

The final game of the freshman tournament came against host Lovell, and the Panthers hit their first bump in the road. The press from the Bulldogs caused problems early and often.

Jordan led the Panthers with 13 points heading into the winter break.

A rivalry game greeted Powell coming out of the break, and a home game with Cody went down to the wire.

Cody jumped out to an early lead in the first quarter thanks to an early press, but a buzzer beater by the Panthers cut the Bronc lead to 15-11.

Powell battled back in the second quarter, and tied the score at 18 going into halftime.

The back and forth affair continued in the third quarter as both teams made small runs before tying at 27 going into the fourth quarter.

Both teams found their offense in the fourth quarter, with Cody hitting a huge 3-pointer with 1:25 left in the game to take a three-point lead. Jordan then hit a huge basket of his own with 40 seconds left to pull the game within a point.

Two missed free throws gave the Panthers an opportunity to get the ball, but an offensive rebound and put back by the Broncs again gave Cody a three-point lead with five seconds left.

A quick push by Powell up-court gave them a chance to tie the game, but a 3-pointer from just inside half court by Jordan bounced off the rim. Cody took a 43-40 victory and moved the young Panthers to 3-2.

A press at the end of the game again caused problems for Powell, but Stenlund said his team will learn throughout the season. He said this team learns better through repetition as opposed to drawn out plays on a white board.

Stenlund knows the freshman team will continue to improve, as they have the opportunity to practice against the upperclassmen every day in practice.

“If they can keep improving through the season we’ll be a tough team to beat at the end of the season in the freshman tournament,” Stenlund said.