Fisherman evacuated after injury near river

Emergency personnel teamed up last week to assist and evacuate an 84-year-old fisherman who was injured in a fall along a river west of Cody.

Fisherman evacuated after injury near river 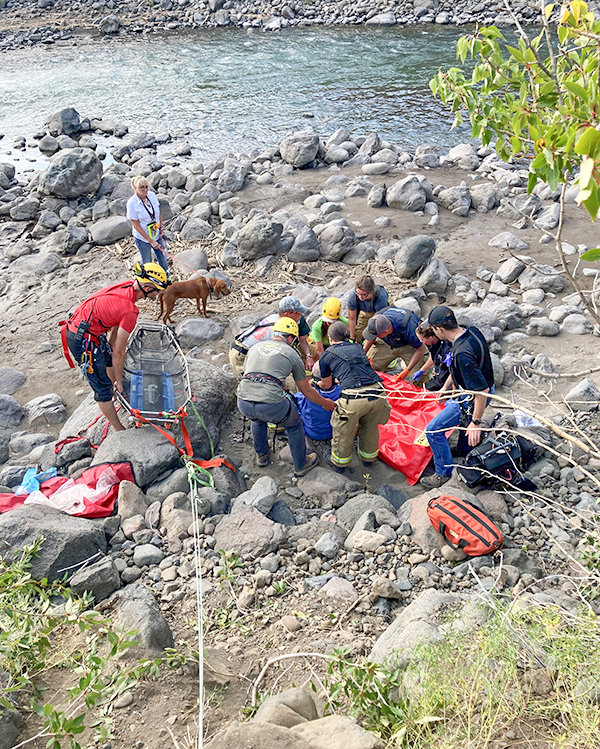 Emergency personnel, including members of Park County Search and Rescue, prepare to transport an injured fisherman up a hill and into a waiting ambulance on Thursday afternoon west of Cody.
Courtesy photo
Posted Tuesday, September 14, 2021 8:10 am

Emergency personnel teamed up last week to assist and evacuate an 84-year-old fisherman who was injured in a fall along a river west of Cody.

It was around 3:36 p.m. Thursday that the sheriff’s office received a report that the man had fallen and hurt his back and head off of U.S. Highway 14/16/20 West, near mile marker 27.5. The fisherman was located about 500 yards upstream under the bridge near the river’s edge.

Park County Search and Rescue, Park County Sheriff’s deputies and an ambulance crew from Cody Regional Health were all paged to respond. A deputy reached the scene at 4:15 p.m. and as other units were arriving, the Cody Fire Department, returning to Cody from another call, also stopped to assist.

The man was assessed by emergency medical services personnel and packaged with a cervical collar and full body vacuum splint for spinal immobilization. He was then hauled up the hill via a rope haul system that search and rescue personnel had constructed. The man was secured to a litter and transported to a waiting Cody Regional Health ambulance at approximately 4:58 p.m.

A “rope haul system” is used to help move large items with minimal effort. Referred to as a “Dual Main 3:1,” the hauling system provides a pull that is three times easier, the sheriff’s office said, preventing fatigue on the rescuer and providing a safer extraction for the subject. The sheriff’s office called it an example of the specialized training Park County Search and Rescue Team has received.

The office said high levels of training and experience plus multi-agency cooperation led to another successful rescue mission.

“Even though the fire department was not formally requested to respond to this incident they immediately jumped in to provide service and answer the call of duty,” Undersheriff Andy Varian said in a statement. “Just another example of the exemplary team work that can be counted on in Park County.”